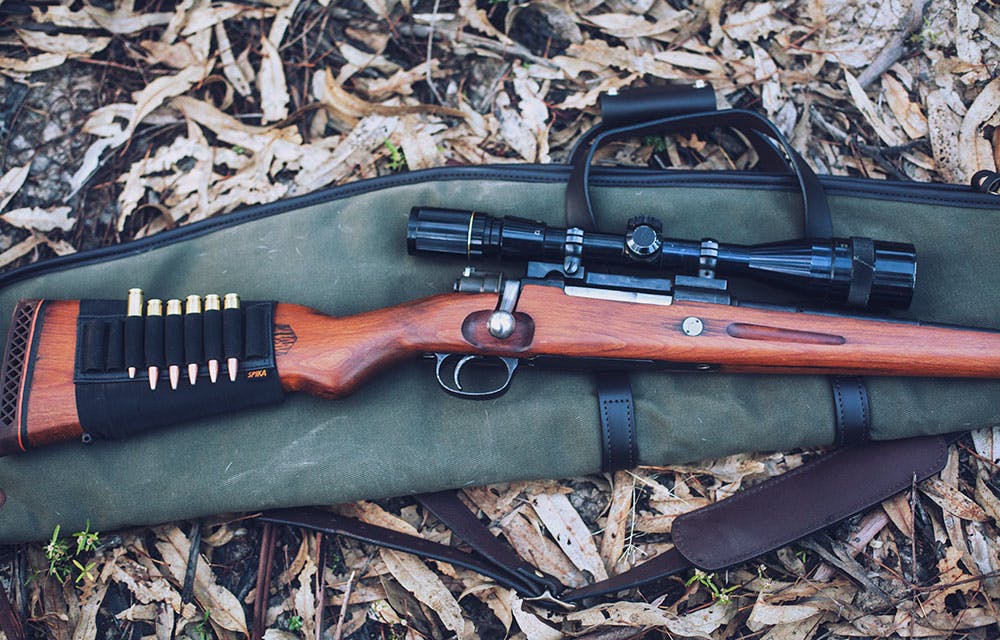 Rohan Anderson, of popular blog Whole Larder Love, is a modern-day hunter-gatherer living just outside the historical town of Ballarat in regional Victoria, Australia. He spent much of his childhood on a small farm where he developed not only an affinity for nature, but also a deep understanding of the role it plays in providing sustenance. Now, Rohan has taken these lessons into his adult life where he now grows, hunts, fishes, and forages in wild and urban surroundings – procuring food to feed his family. It’s now autumn in Australia and Rohan is hunting to fill his larder storeroom with sustenance for the harsh winter. Photos courtesy of Kate Berry.

The winds have cooled. Evenings bring a chill that will test a mans resolve. The kitchen garden begins to look worse for ware, frost burnt foliage barely hides the remaining fruit from the past summer. Autumn is the early warning system, it’s the prophet that speaks of of the oncoming harshness of winter. 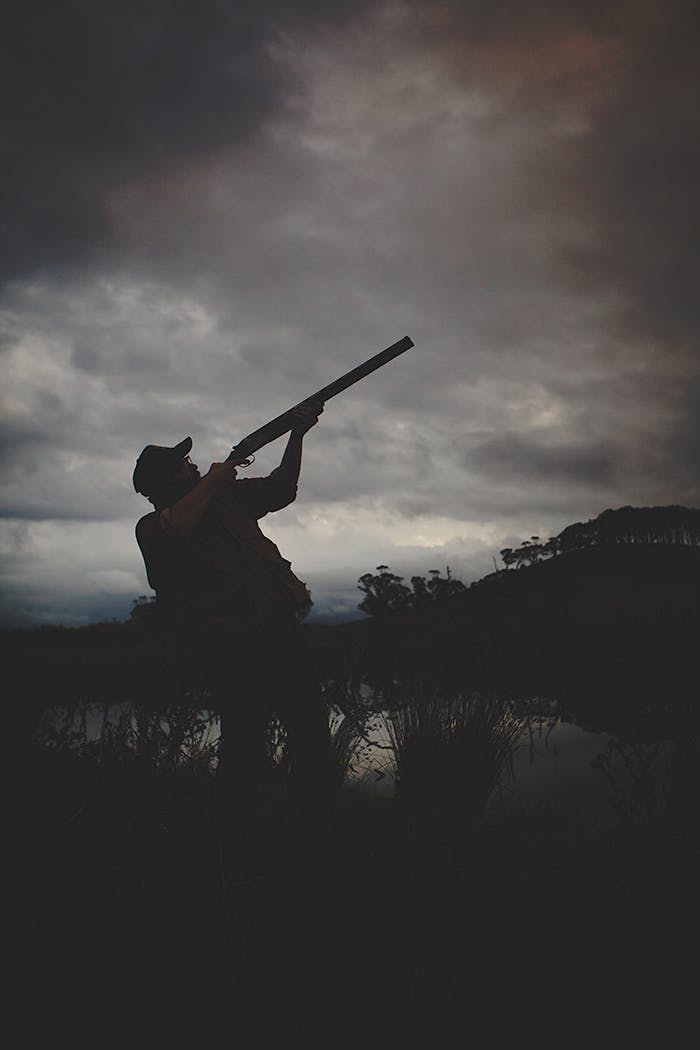 Autumn is a second chance. It gives me enough time to prepare, to re-stock my cache in readiness. All summer I’ve tended my garden, I’ve nurtured and harvested. Food has been stored, preserved and bottled. But there is one thing I don’t have the luxury of making myself, instead I allow nature to do that work for me. There are beasts out there that will feed us, they’ve been feeding humans for eons. Allowing mother nature to determine her carrying capacity, to decide what she will give and what she will retain. 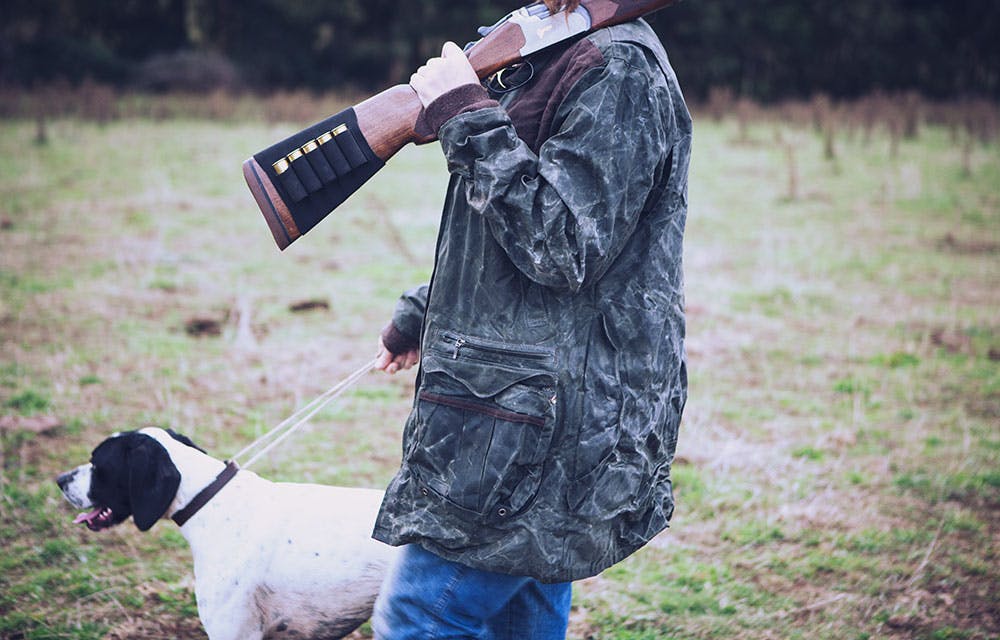 March starts the cycle, with ducks in season. They’ve breed and hatched last spring and now are in good numbers on the water. My task is to traverse the fields to water holes, damns and wetlands, searching for groups of ducks. Hunting these skittish birds is no easy task. They often hear me before I spot them. Every effort is made for a silent approach. The pant of my dog, the slight crack of a broken stick, all these things are enough to spook a skittish duck. But when the cards are played well, my position is unknown and as I rise to observe the water my efforts are rewarded. Ducks on the water, soon to be alerted of my presence, and that’s fine, up they go. With a resounding boom, my gun works its best to find the mark. A duck will drop for the water, a meal has been won. My obedient pointer released from my hold dives into the frigid waters for his job is ingrained from years of selective breeding. Webbed feet paddle away, open toothy jaws grab the marked duck and a sharp turn around, duck is retrieved and on its way to master. What an experience that is. To work hand in hand with a hunting dog. I never feel alone when Henry is by my side. We both like to hunt, to be outside, doing what years of evolution have made us to be: hunters. 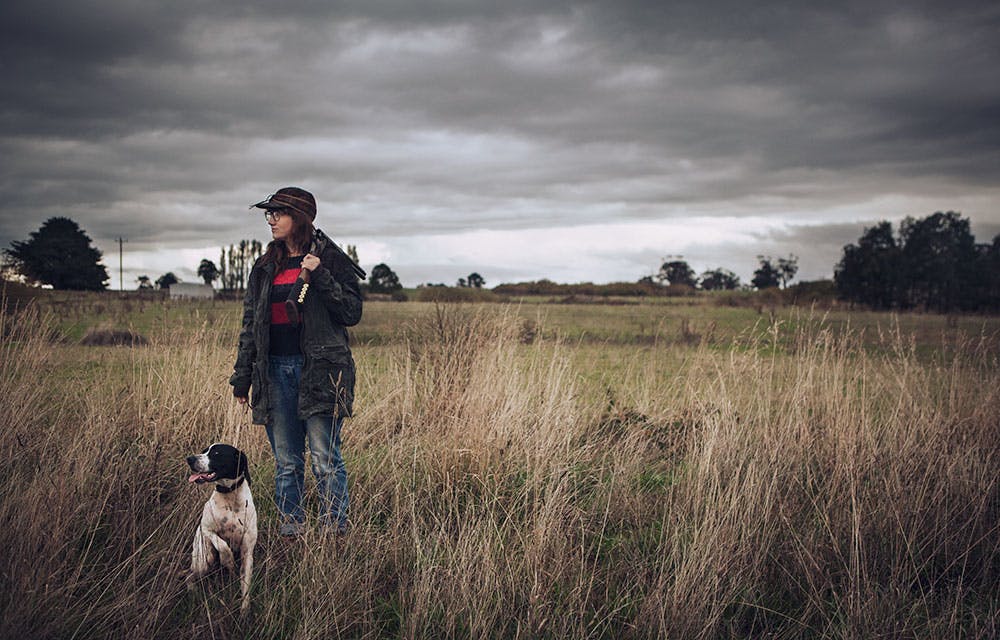 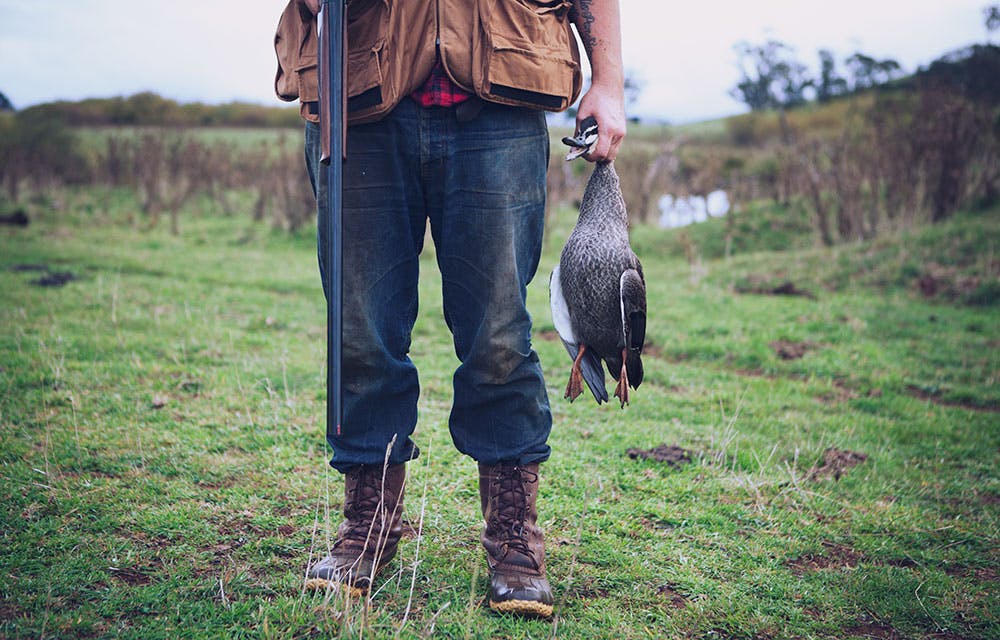 With ducks plucked, cooked or frozen we head out for our next duty, hunting red meat for winter stores. It’s illegal for me to hunt the most sustainable meat, kangaroo, so my next option is introduced wild deer. The population has been meticulously managed for years by hunting groups, but now the population has boomed. In some places there are as many deer as there are kangaroo. It’s a beautiful meat, a beautiful animal and like money in the bank for our food store. When not much grows in the deadly cold of winter, I can always pluck out some venison from the stores and feast like a king. It is after all a royal game. 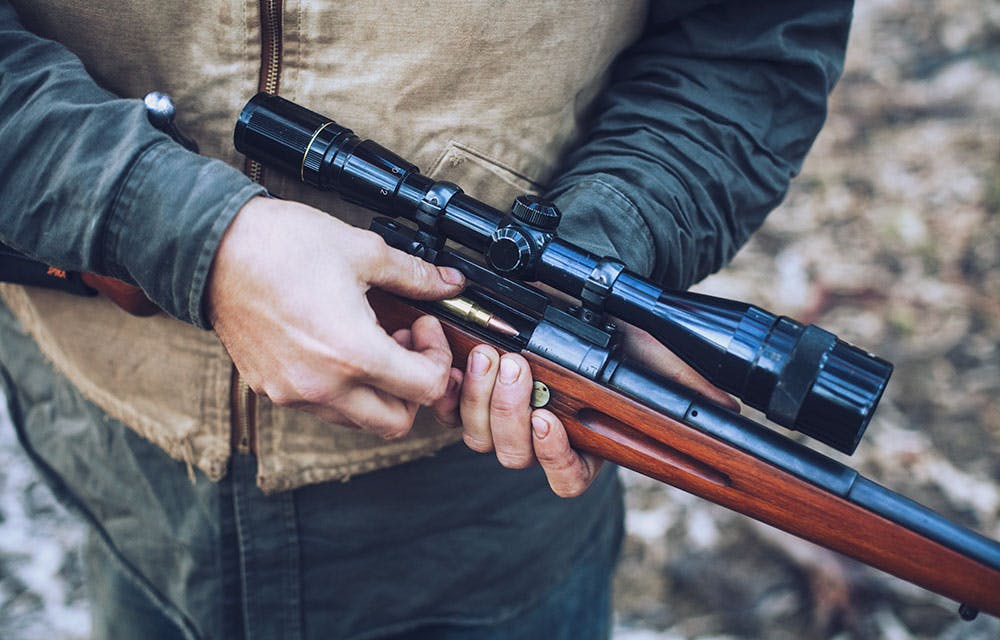 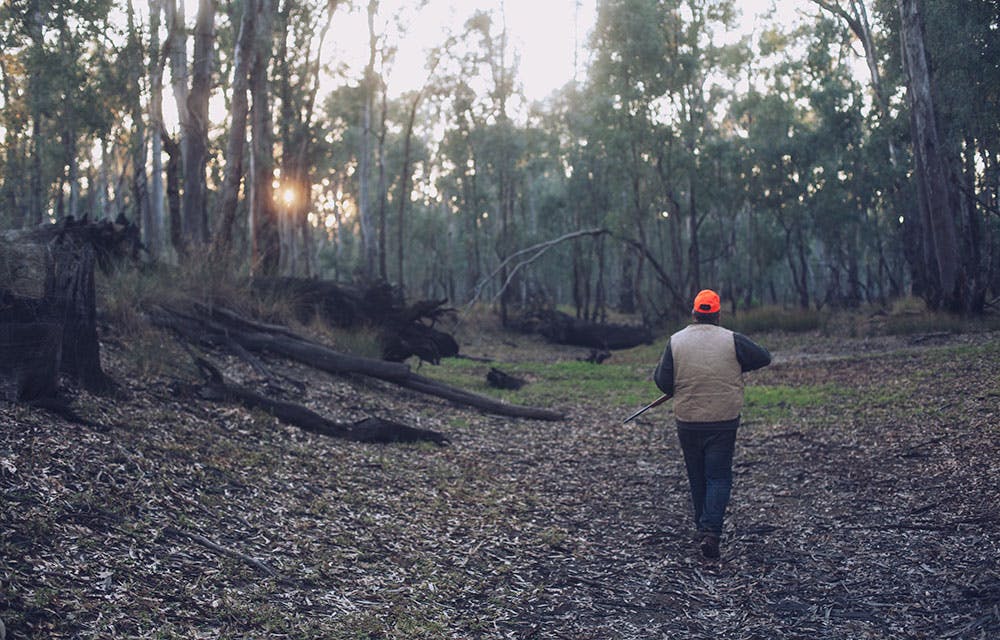 Our camp has been set, our swags rolled out for evening. Dusk light sneaks its way through the bush, scattered and dappled landing on the forest floor. Spell binding as the light may be, we head out to observe, to search to become acquainted with this patch of earth. There are tracks and scats everywhere. In the distance we hear them, bucks growling, their hoofs rustle in the dried eucalyptus litter on the forest floor. Here there are no other humans, just bush and beast, weather and light. All sense are on high alert, lapping up everything that surrounds. To be an observer here, is to be a privileged man. 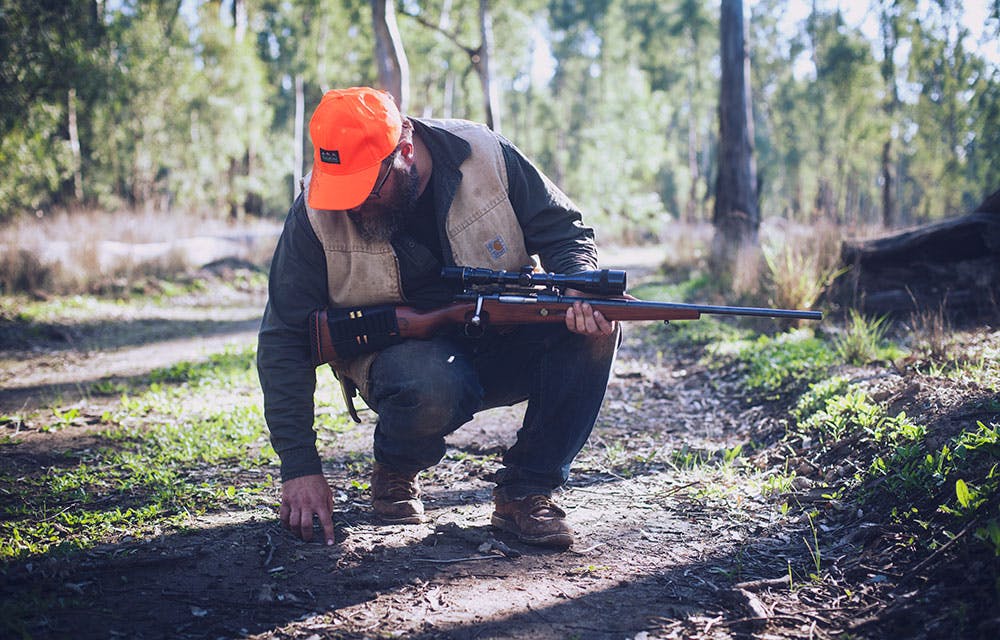 Evening arrives as fast as dusk disappears. A stew bubbles away above hot coals and flames, destined to fill our hungry bodies. With bellies full and hearts at peace, sleep comes without obstacle. Eyes open early to a dark morning, the air is crisp, steam exits with breath, the morning is ours to hunt upon. We gather our gear, jackets pulled over our shoulders, boot laces pulled tight and the rifle slides from its case and rounds fill the magazine. 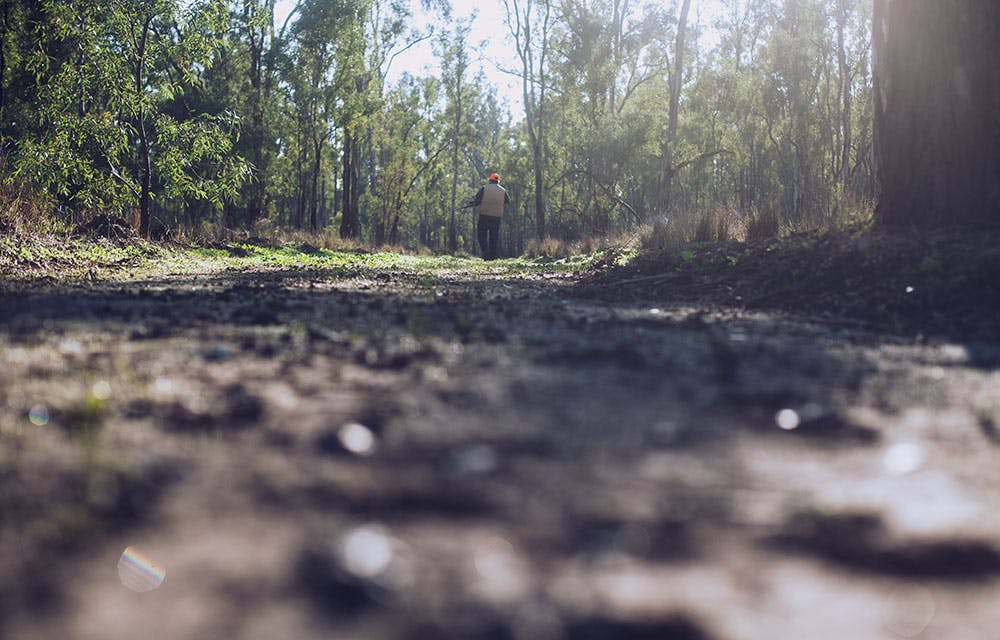 Through the bush we creep, as quiet as we can be. Distant bucks challenge, heads and antlers crash and battle. Glimpses of the beasts are spied through brush and tree. The growling and fighting becomes distant and we return to being alone with the wind toying with the high tree’s and silence of soil below. Later in the morning, my chance comes with a stag dead centre in our path. My aim is true and a shot to the neck and he drops like a sack of potatoes. He’s a beautiful animal. From a distance a buck gives off the appearance of grace, up close however he is more powerful. He is strong, magnificent. Seeing the animal dead is difficult at times. Especially being such a large beast. As I kneel beside him, my heart aches for what I’ve done, at the same time rejoices for the meat I have acquired. To think this way is to be human.

My task is far from complete. There’s the skinning, gutting and butchering. It’s far from the luxury of buying plastic wrapped meat from a supermarket, but that’s the choice I’ve made. To hunt and work for my meat. I’m living real. I’m living backwards in a world that keeps telling us to move forwards. I like being here. This is what makes the most sense. 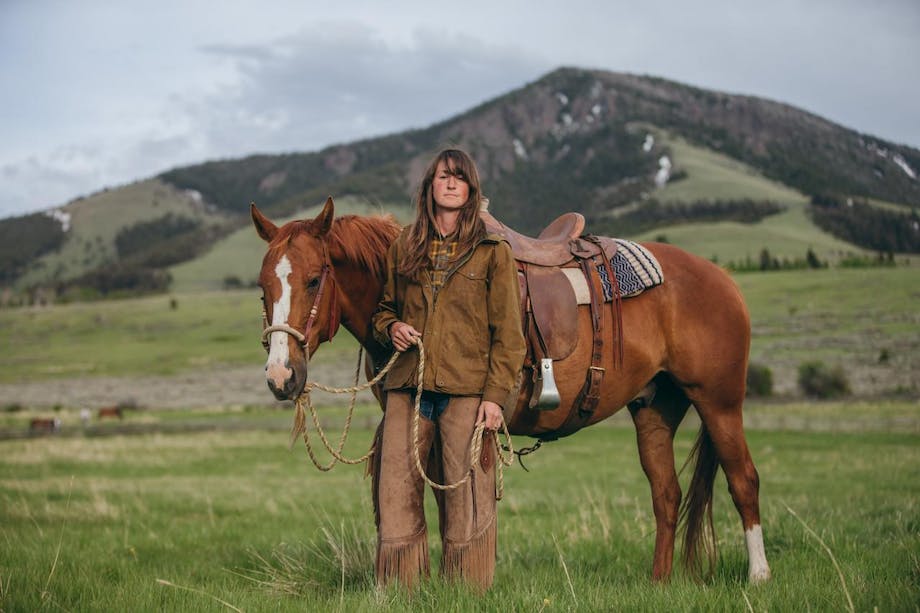 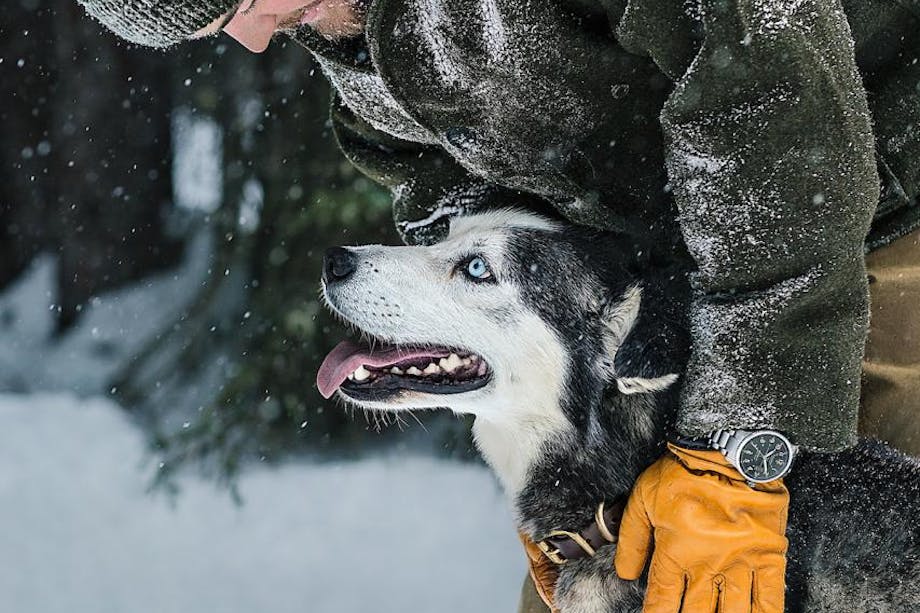