Hunter Rung is a hunting guide and traditional bowhunter from Montana. We caught up with him before he got into the mountains for fall hunting season to ask him about his beginnings with archery and what hunting means to him.

Who taught you to hunt? How long have you been hunting?

I started hunting at a very young age. It was my father that introduced me to big game hunting by hunting Whitetail deer in Pennsylvania. Shortly thereafter, my uncle introduced me to upland bird hunting and bird dogs, also in the hills of PA. My uncle was the one who saw my drive to hunt as a boy and bought me a compound bow when I was fifteen. I was mostly self taught when it came to archery in those early years.

What is it about hunting that keeps you coming back to it?

Hunting is definitely my lifestyle, I would argue that it isn’t something I come back to, but a part of me that I never leave. When one hunt ends, the next begins. I plan all year long. I love nature, wild places and wild things; that is what draws me. The mountains in the West, the hills and forests in the East, and even the sea, they all mean something to me. They are always changing. Ten lifetimes would not be enough to understand the entire natural world; the life-long learning is what keeps me engaged with hunting.

When did you pick up traditional archery? What about it appeals to you?

When I was in high-school in Pennsylvania, I tried to build a bow from an old hickory stave that was given to me by one of my teachers. The result was an ugly bow with a 25 pound draw weight that I couldn’t hunt with. I knew before I had a compound that I wanted to be a traditional bowhunter. Ultimately, I was attracted to a longbow from learning about the Native Americans of the eastern woodlands from books and artwork in my uncle’s home. The challenge and simplicity is what appealed to me and what really sticks with me today.

What was the transition like from shooting a compound bow to a traditional bow?

I did take my compound bow out hunting for a season in PA. I hunted with it because it was the only bow that I had at the time. I remember sitting in the tree stand, my bow hanging in front of me with an arrow nocked and on the rest. I looked at it and saw the cams, the horizontal limbs, multiple strings, and a five pin sight with a level in it. I remember thinking that it wasn’t really a bow, at least not the type for me. It wasn’t what I pictured when I imagined myself bowhunting. At that moment a very nice buck walked into my view and stepped into 35 yards, which would have been a shot that I could have made. I didn’t take that shot. I can’t explain why, but it just wasn’t the way I wanted to take a life, or it wasn’t the story that I wanted to tell.

What made you want to learn to make your own traditional gear?

Initially my fascination with Native Americans led me to wanting to make my own equipment. I felt that crafting my own equipment would add so much depth to the hunting experience. When I get to hunt and be successful with a bow that took countless hours to make, and I’ve incorporated my blood and sweat into the final product, the hunt is that much more significant. My teacher in high school played a role when he gave me that hickory stave, but it wasn’t until I moved to Montana and met Walter Francis that I really began to put things together. He is now a mentor and great friend, he taught me how to really build a bow and build arrows and all the other hunting gear I use.

What is your favorite species to hunt? Why?

My favorite species to hunt is Rocky Mountain Elk. I love them because for years I chased them in the mountains of Montana and they always seemed to elude me. They are such a majestic animal and an icon of the West. They are big, exciting and there are lots of them. You can hunt them on foot in the mountains and chase them for miles, or you can hunt them like whitetails, from a treestand.

What does the freedom to hunt on public land mean to you personally?

The freedom to hunt public lands holds a special place in my heart. That freedom permits me to live the hunting lifestyle that I love and share that life with others. I think public land is the backbone of the American outdoorsman. Public land is sacred and something that is so important to me. We need to protect it so that future generations can enjoy these places and live this lifestyle. 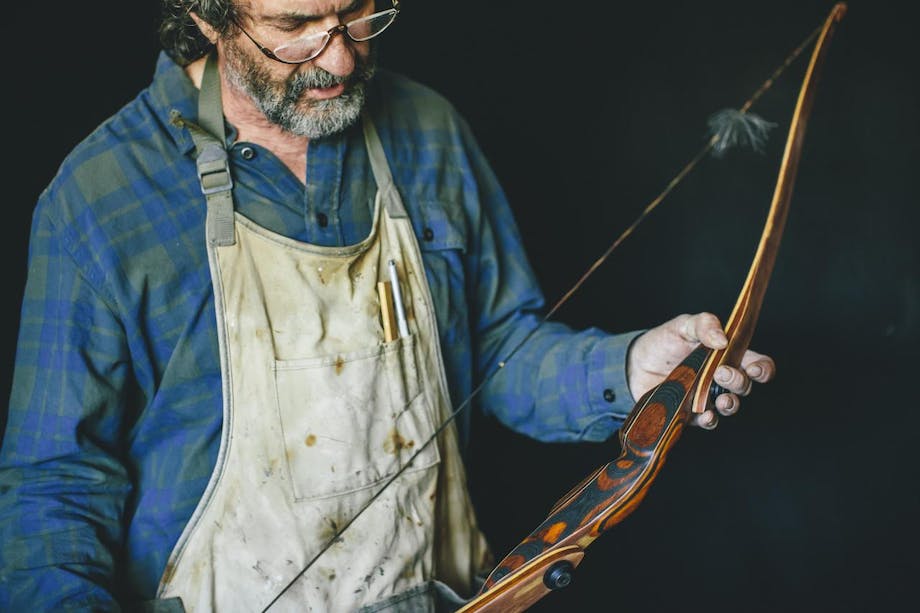 Dick Robertson is the owner and founder of Robertson Stykbow in Forest Grove, MT. Dick has been designing and crafting some of the most beautiful and high-performance traditional bows for the last twenty-five years. We sent Joel Caldwell to spend a few days on the Robertson ranch to discover the passions of the man behind