The Divers Institute of Technology is one of the premier commercial dive schools in the country. For the past 49 years it’s been churning out graduates from its headquarters on Seattle’s Lake Union to tackle some of the most demanding work in the water. 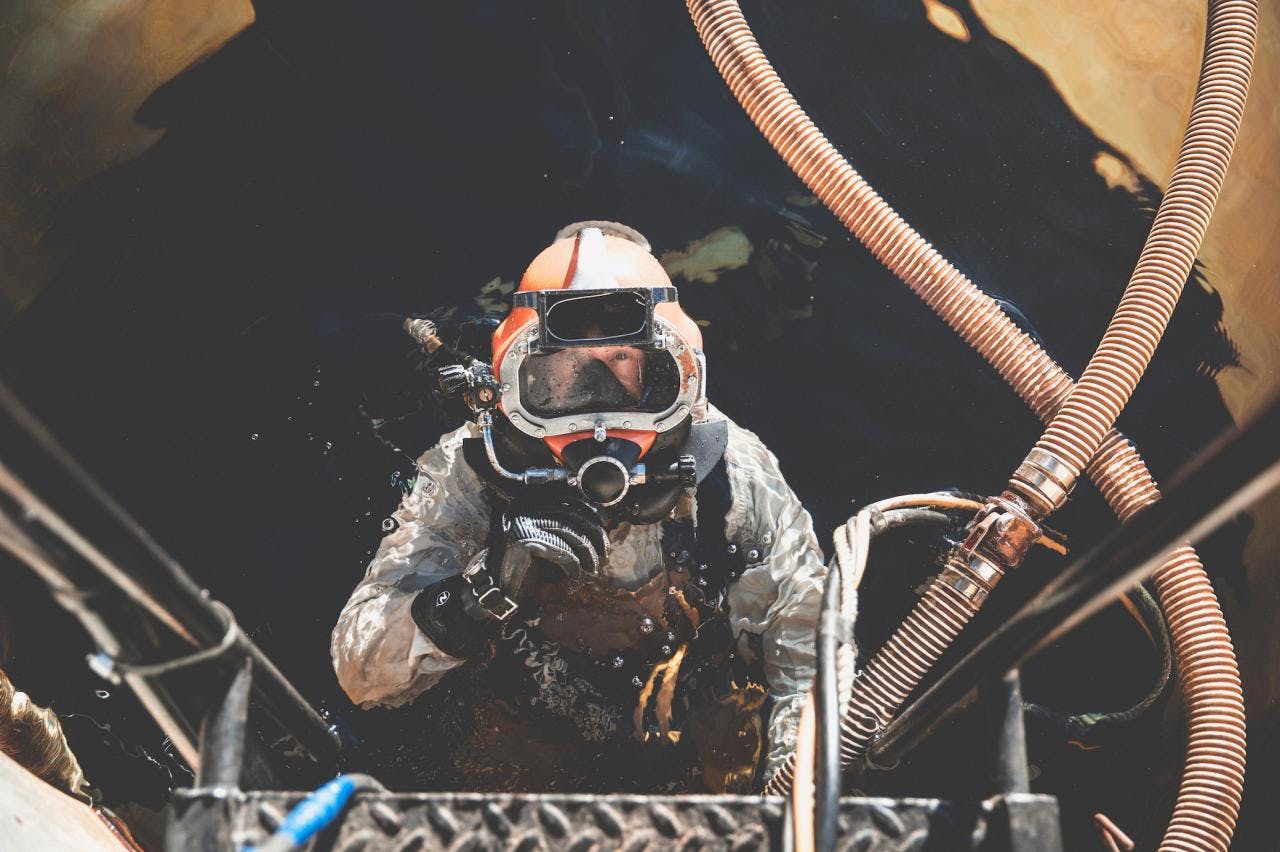 Diving in radioactive water presents a unique set of challenges. The trick is to avoid contact with any of the microscopic bits of irradiated material that could stunt a family tree. But every nuclear power plant in the world needs a lot of water—some as much as 1 billion gallons per day—to both generate steam and to absorb the heat produced by splitting atoms.

As the plants log the years and megawatts, their massive cooling tanks and plumbing infrastructures need to be maintained. According to the U.S. Energy Information Administration, the average age of nuclear power plants in this country is about 35 years old. Which means a lot of underwater man-hours in potentially dangerous environments.

“I can tell you that all of our nuclear power plants in the United States, someone dives them on a fairly regular basis,” says John Paul Johnston. Johnston is the executive director of the Seattle-based Divers Institute of Technology (DIT), which certifies divers to handle nuclear work through its hazardous materials program.  “And because of the risks involved, all those companies take incredible measures to make sure the divers aren’t over exposed.”

When racking fuel rods or doing any number of other jobs in the nuclear cooling tanks, known as the hot side, divers wear radiation dosimeters on their feet, legs, chest, arms, and head. A topside technician monitors the amount of radiation, what divers call the dose, through an umbilical cord to the surface. The diver’s vulcanized rubber suit is, of course, completely sealed. It’s also cooled, typically through small hoses of circulating ice water sewn into the dry suit. After the dive is completed, every drop of “hot” water has to be rinsed off with demineralized water. 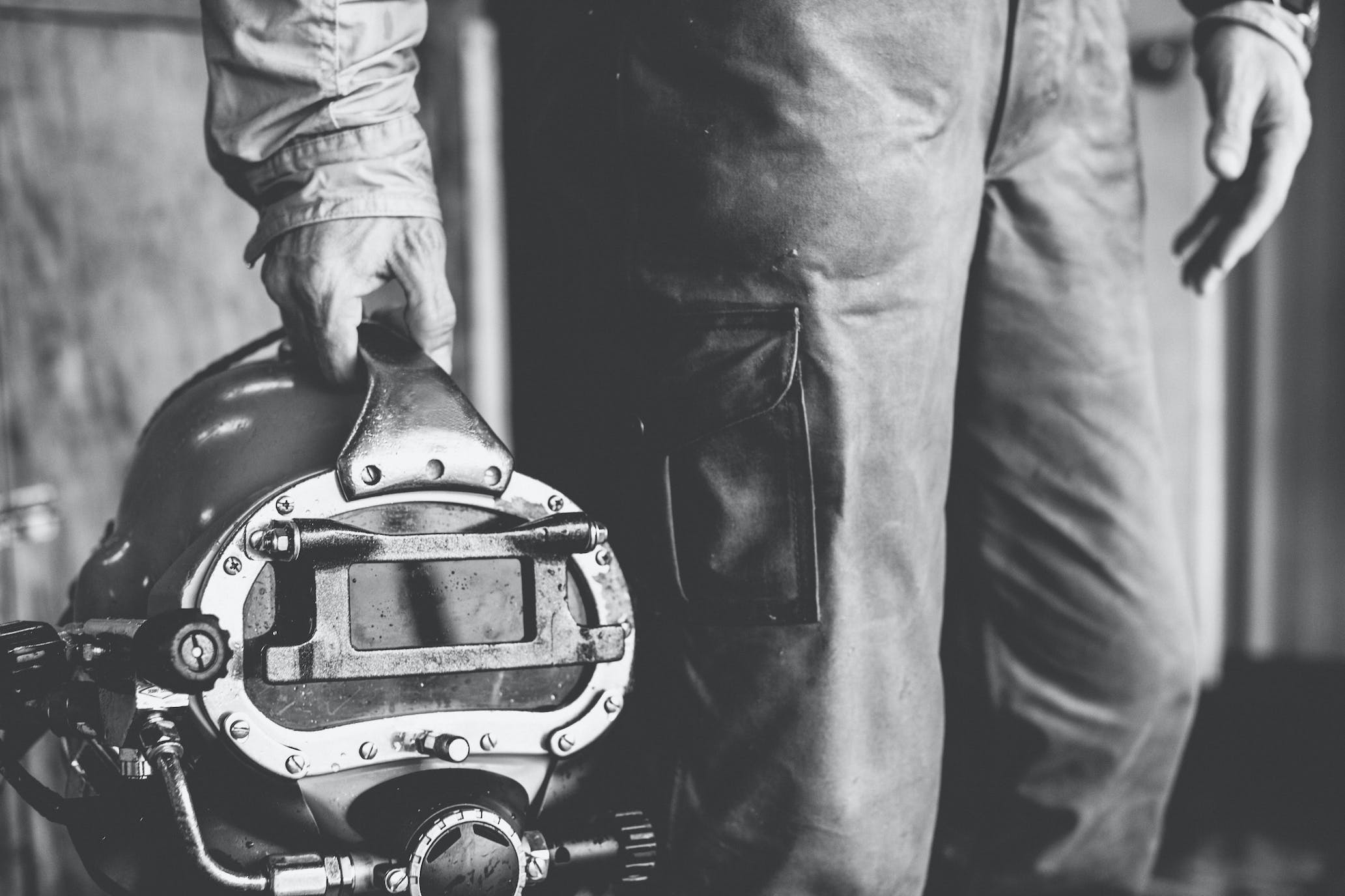 Staying safe in hazardous materials situations is part DIT’s seven-month program that essentially gives students a taste of what they’ll find on commercial diving jobsites. By the end of the program, successful graduates will be certified dive medic technicians, will have salvaged a sunken vessel from Lake Union, and will have dived to 160 feet in open water. They’ll know how to run a chainsaw underwater, have a working knowledge of underwater welding, and will have bolted pipe flanges with a blacked-out mask to simulate murky conditions.

“This is a niche business where you can’t just hire someone off the street to do the work,” says Jeff Stiefel, an instructor at DIT. “With the certification you get here, you can go and see and experience a lot of different stuff that most people will only read about or see in a documentary.” 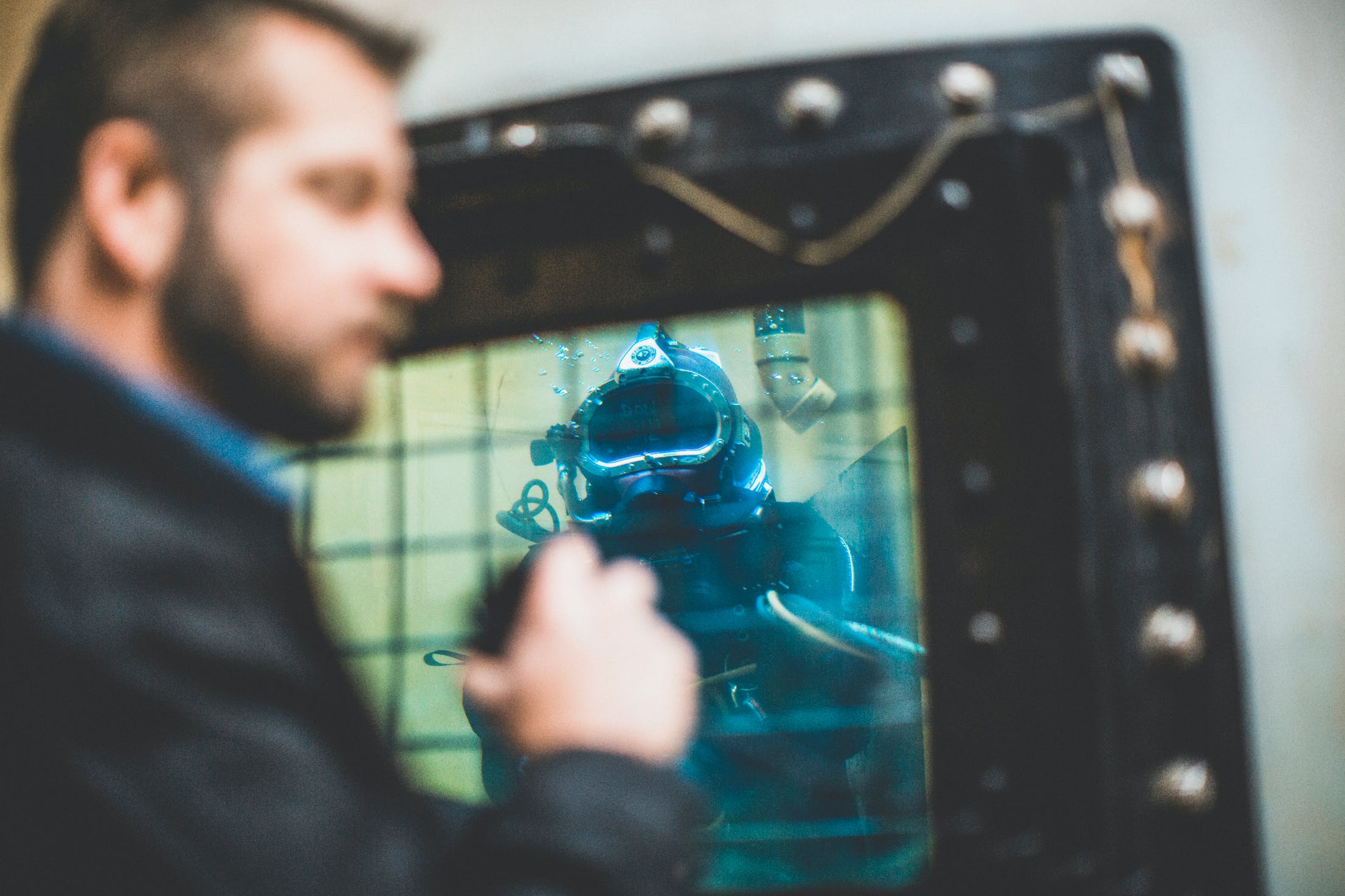 DIT is arguably the top commercial dive school in the country. It’s one of only two that offer international certification, which because U.S. certification standards fall short of gaining much respect in the international community, is critical to divers looking to work overseas. Its accreditation requirements mandate that at least 70 percent of its graduates work in the dive industry after being certified. During its seven-month course, the instructors cover 1,100 points, what executive director Johnston calls “enabling objectives and terminal objectives.”

“We don’t spoon feed our students here because no one’s going to do that in the real world,” he says. “I have a stack of resumes on my desk right now and an engineering firm looking to hire someone with a very specific skillset. They call us looking for people, and I can find them.”

Kyra Richter attended DIT in 2003. Having been a dive instructor for ten years, a certified cave diver, and even doing a stint at the Seattle Aquarium, she came with a wealth of underwater experience. DIT taught her “hard-hat” diving, or diving in a helmet with an air hose to the surface, as opposed to using SCUBA gear. Out of DIT, she specialized in nuclear work, partly because she was small and could easily fit in the pipes and tubes that required a small diver.

“I’m not going to lie,” she says, “as a woman I looked at this industry, and looked at the these strong men—its takes a lot of strength to do this stuff—and I saw that nuclear diving was a place where strength wouldn’t always be your only attribute. So I just went for it.” 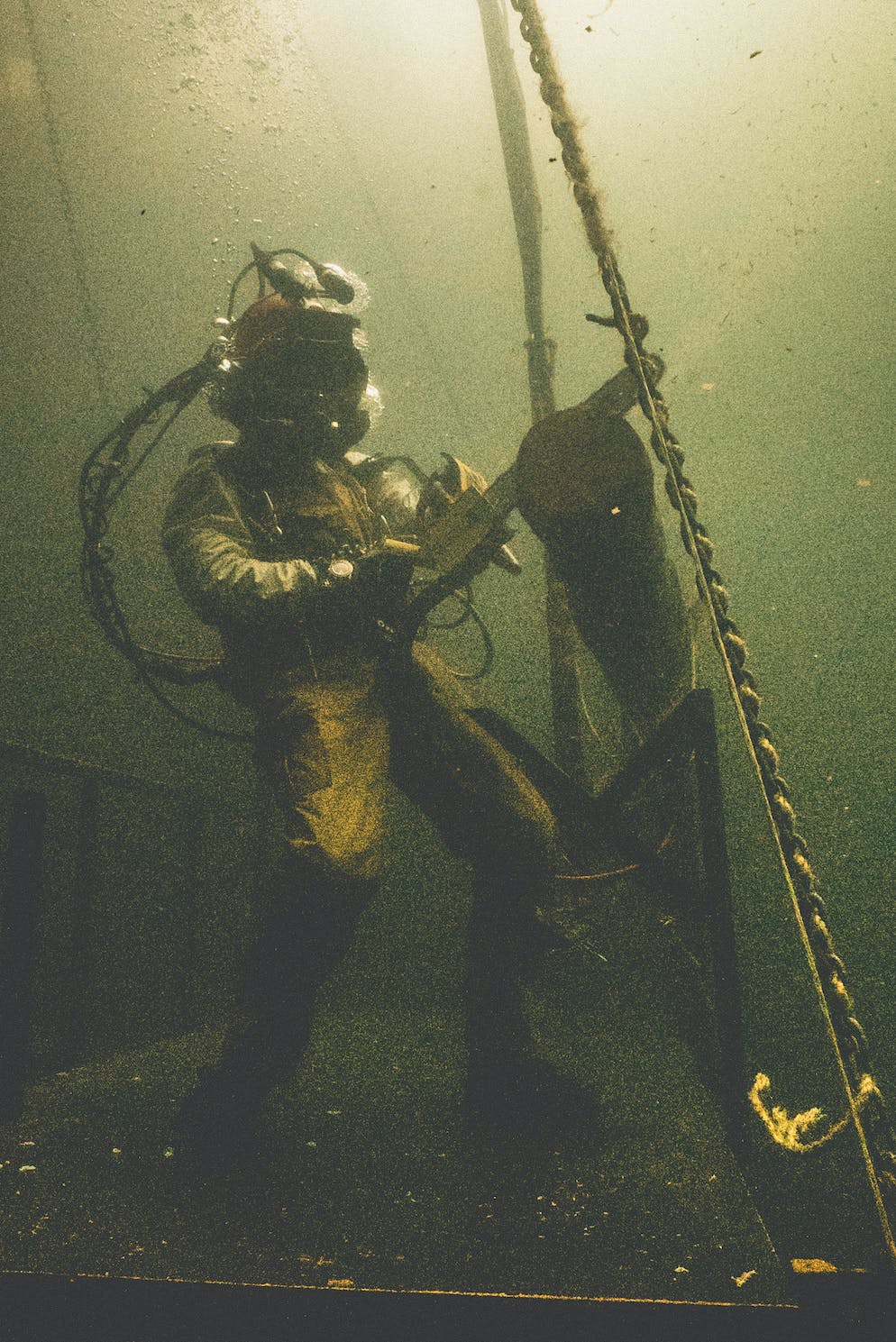 Having worked as a nuclear diver and dive supervisor, Richter is now the environmental supervisor for American Electric Power in southwest Michigan. She oversees, among other things, all dive projects to address biofouling by zebra mussels and other organisms in power plant pipes that run into Lake Michigan. She also maintains a database of worldwide diving accidents as part of her effort to improve diver safety. As a spokesperson for the Divers Association, what she calls the voice of diver safety, she and others are developing industry standards and procedural guidelines for all aspects of nuclear diving.

“There’s very little true regulation for inland and industrial diving,” she says, which in the past led plants to believe that they could put someone in the water in SCUBA gear. Thanks to her and those working alongside her, divers throughout the industry work on safer jobsites.

“Now we have good procedures backed by good data, and we’re moving forward with that. Last year I got contacted by a power plant in South Korea that had a job and were wondering how we’d do it. Sometimes it’s that informal, but it’s still a really good thing.” 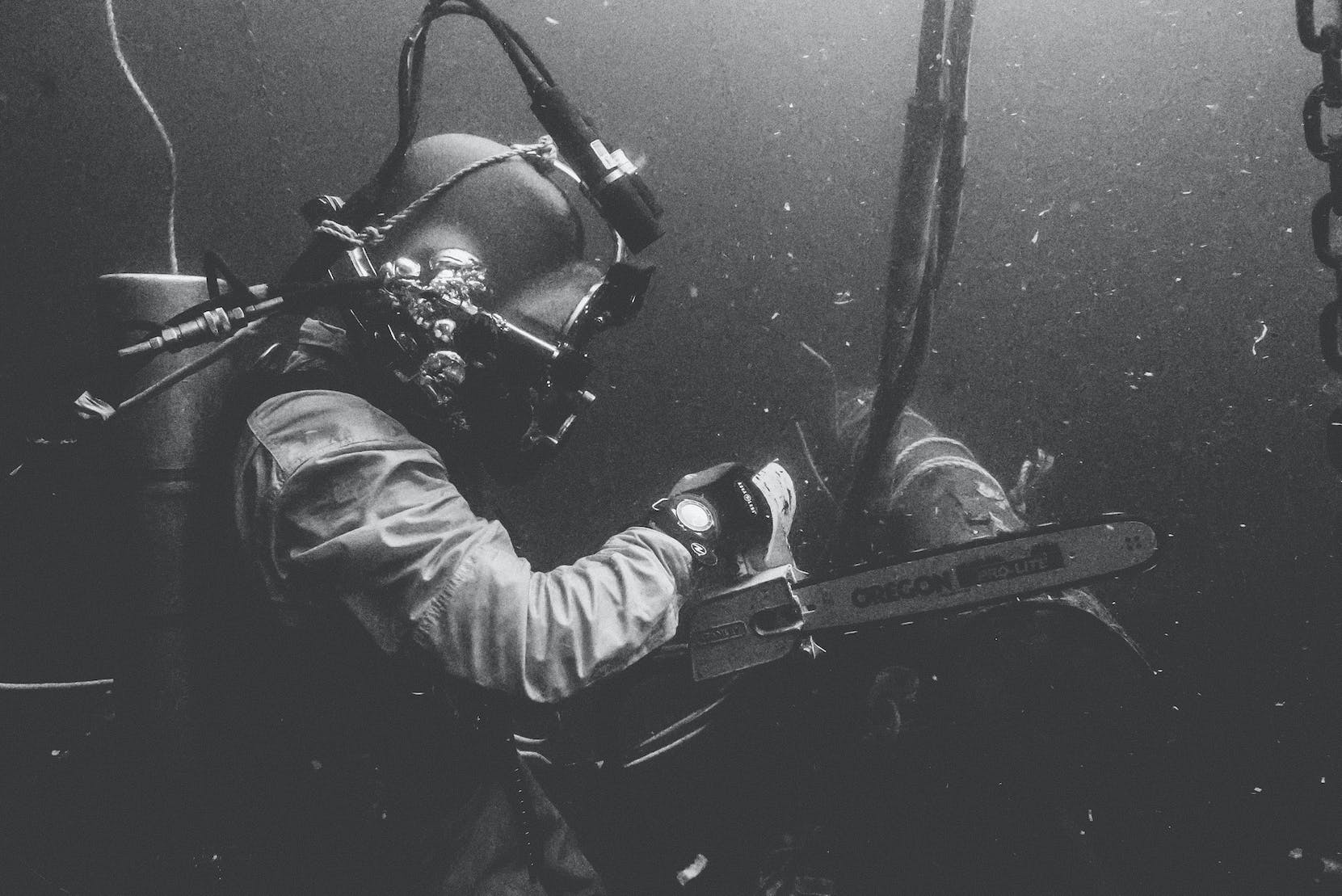 Jason LeComb arrived at DIT in 2006 with very little diving experience. After seven months on the DIT learning curve, he shipped out for the Gulf of Mexico. The offshore oil field in the Gulf has a nearly insatiable need for commercial divers, and LaComb spent six months there as a topside tender, diving on a few occasions. He then went to Dutch Harbor, Alaska, where he inspected piers, did a lot of underwater welding, dove on a few contracts for the Coast Guard, and salvaged two sunken ships, one of them a 300-foot container ship.

“Alaska is an extremely cold place to work as a diver,” he says. “But it’s an adventure, and that’s what I was looking for: adventure.”

After Alaska, LaComb took a job in Texas, cleaning and inspecting water towers. He and his crew hauled their dive gear to the tops of every water tower in the state to have a look inside them. Like a lot of commercial dive jobs, the work was physically demanding but offered views of the world few will ever see. From Texas, LaComb drifted to Mexico to work as a dive instructor for eighteen months. Commercial diving, he says, is a ticket to the world.

“You can go anywhere in this line of work, and I tried, that’s for sure,” he says.

At the end of February this year, LaComb will return to DIT to receive dive medic certification, which wasn’t part of the curriculum in 2006 when he attended. He’ll also recertify his diving credentials, something DIT offers to all of its graduates free of charge. After recertification, he’ll go to Europe to dive under a French work visa.

LaComb, like two thirds of all DIT students, had a previous military career, having served in the French Foreign Legion and then the U.S. Army as a forward observer for a field artillery unit. DIT has always had close ties to the military. Its founder, John Manlove, who set up the school in 1968, retired from the Navy as a first-class diver. Executive director Johnston spent 30 years in the Navy and has been at DIT since 2000. For all of its 49 years of certifying students, DIT has been a veteran owned and operated school. More than half of its current faculty are military veterans.

“The military guys train everyday of their lives, so they really have the training and teaching part down thoroughly,” Johnston says. “The commercial guys come in with the real-world experience that’s needed in the commercial diving community. That all makes for a really good partnership.” 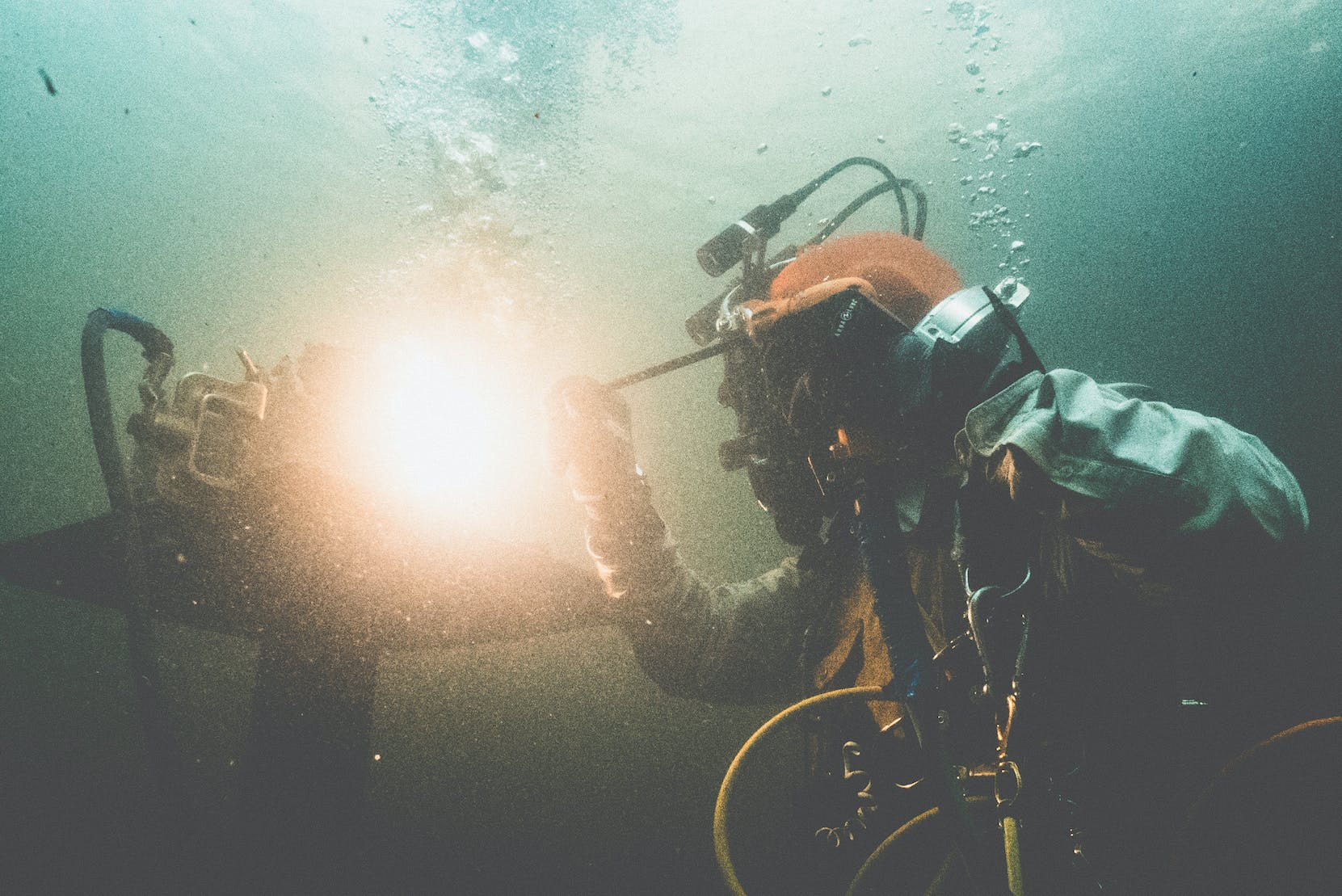 Commercial divers often wear protective clothing over their dry suits. Dry suits are expensive, and they’re easily damaged when working on barnacled pilings or cutting submerged logs with a chainsaw. Johnston, Stiefel, and several other DIT instructors think that Filson Tin Cloth holds up longer under water than anything else they’ve worn.

“My students will tell you that I’m really hard on them about wearing chaffing gear over their dry suits,” he says. “Once we get on the bottom, divers can be like a bull in a China shop. Because of the tight weave and the oil finish, Tin Cloth is the best.”

A lot of commercial dive work can look dangerous to the untrained eye. But most in the industry will tell you that training and education make the job doable. Either way, the stakes are often high. Which can lead to superstitions. In the same way that a football player wears a single pair of cleats for an entire season, a diver will want to use the same gear, the stuff he knows and trusts.

“There’s nothing worse than breaking in new gear,” Stiefel says. “With Filson you can buy it every five years or so—rather than having to buy it new every year.”

Jason LaComb agrees. He’s been beating the hell out of Filson Tin Cloth for most of his diving career. And there’s nothing else he’d rather dive in.

“When I was diving in the Gulf of Mexico, it was so hot that I was just wearing coveralls, naked underneath them,” he says. “It sounds weird maybe, but it worked for me.”