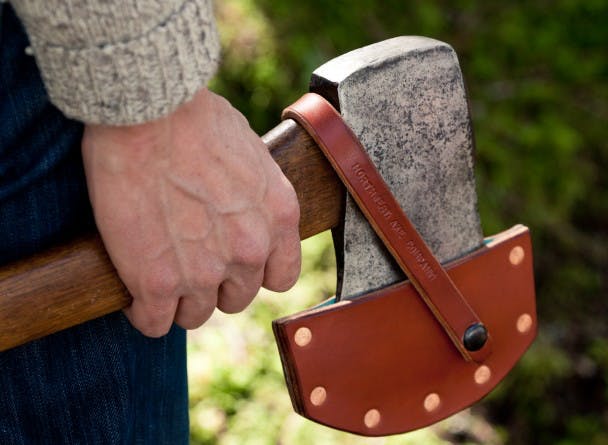 The history of the axe in America is ubiquitous.  Trees as tall as Bunyan were felled with these sharpened glints of steel.  Cities and towns across the nation were born of them.  Great men and women were made by them.  Now, men like Andy Gregory of NW Axe Co. are taking this time-honored tradition in to their own two hands.  The 33 year old South Seattle resident discusses felling his first tree, the 4 most important characteristics of a great axe, and how he hopes to help people stay connected with nature.

How long have you been working with metals and, in particular, crafting axes?
I’ve always loved tools, but only really got into fixing them up in the last couple years. It just naturally happened through spending time in my workshop. I had an old hatchet head that had been collecting dust in my tool box. On a sunny spring day I finally decided to hang a new handle on it, and pleased with the result I decided to make more. As collecting began, I began making custom leather sheaths for each axe, and Northwest Axe Company was born.

How was your interest in axes formed and shaped?
I grew up going to a Boy Scout camp in Wisconsin every summer. Camp Freeland Leslie. This was a real deal, traditional Scout camp. There was the fancy Scout camp 40 miles away with waterskiing and a mess hall with provided meals. Ours was old school. The campsites were all named after Civil War battle sites. You’d arrive, hike out to your campsite, set up your issued canvas A-Frame tents and prepare for the week. You’d hike to the commissary to get the food and supplies for your meals, then hike back and cook your meals at the campsite. Patrol boxes, sheepherders, dutch ovens, water pails for KP, the works. You’d set up an axe yard, split wood for the fire. Later I’d become staff at the camp, where I worked in Scoutcraft. Pioneering, Wilderness Survival, Orienteering, Camping, and Cooking merit badges were all taught there. 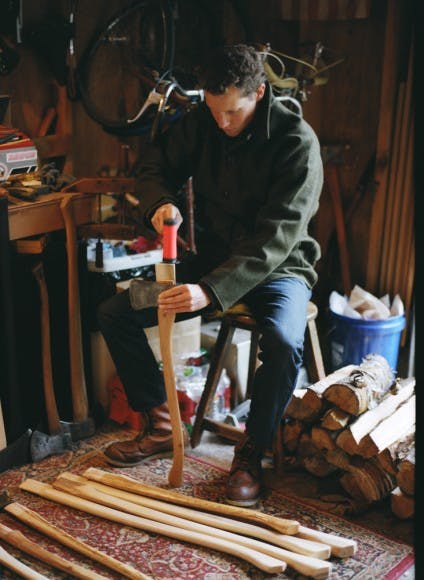 Do you recall felling your first tree?
I specifically remember the summer I taught Camping merit badge, whenever there was down time I’d head over to the axe yard. We had axes, splitting mauls, a stand-and-post wedge splitter and sledgehammer. I’d spend hours splitting wood, there was something so satisfying about the process and the stacking of a wood pile. If I was lucky the cooking folks would be making dutch oven peach cobbler and I’d get in on that too. We’d also have an event every week called the Paul Bunyan Breakfast. You’d get up early, head to Scoutcraft and have a flapjack feast, then hike into the woods to chop down a tree that would get used for building structures in Pioneering area. That was where I felled my first tree.

What are the 4 most important aspects of an axe?
Character, condition, usefulness, and ability to hold an edge, in varying order of importance depending on use. In the end it’s all about splitting wood, carving, or chopping down a tree, I suppose. If your axe can do those things well, then you’ve got a winner. If you’re looking for a wall hanger that is pleasing to the eye, then things like a true aged patina on steel and a weathered handle can’t be beat. I’m usually trying to create a mixture of all of these qualities, something that is beautiful enough to hang as a piece of functional or historical art, but perfectly capable of splitting a cord of wood if required to do so (and look all the more handsome with wear after doing so). 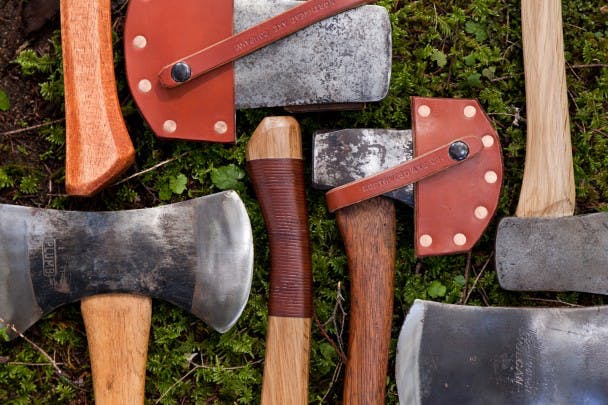 What 3 things separate NW Axe Co. from other companies?
It starts with location. There has never been a large scale axe manufacturer on the West Coast. Northwest Axe Company is preparing to be the first. I have a number of tool designs in the works that I aim to begin producing later this year, utilizing west coast forging and local manufacturing. There’s only a handful of American companies still producing axes in the US, as most have outsourced to China, Mexico, and Taiwan. It’s a big challenge; while there’s established east coast companies that have been doing this for a long time, we are starting from scratch. I love that there’s a historical aspect to what I’m doing.

Another thing is the sheaths I’m making for these axes. I’ve noticed a trend in the industry that sheaths almost seem to be an afterthought to other manufacturers. When you buy a new axe, you want it to be protected during transport and when it’s not in use. I’m creating sheaths that not only complement each axe visually but that will withstand the ins and outs of daily life with a modicum of care. Heavy-duty four piece construction with good rivets, and a proper welt for the edge to rest on, not just some thin leather wrapped around the bit.

Finally, it’s the philosophy I bring to this business. I have an environmental background and conservation is a very important part of my environmental ethic. The history of these tools being used by the USFS, trail workers, and conservation groups is not lost on me. This country was built with an axe. I appreciate that most of the people who are buying my tools are people who are close to nature in some way or another, and that’s in part what I am trying to do with this business, help people stay connected to the outdoors. In this technological era, it’s easy for us to get lost in computer world. In a way, the axe is a symbol of where we’ve come from and what we all must remember, that without shelter, clean water, food, and warmth, none of the rest of this makes any difference. 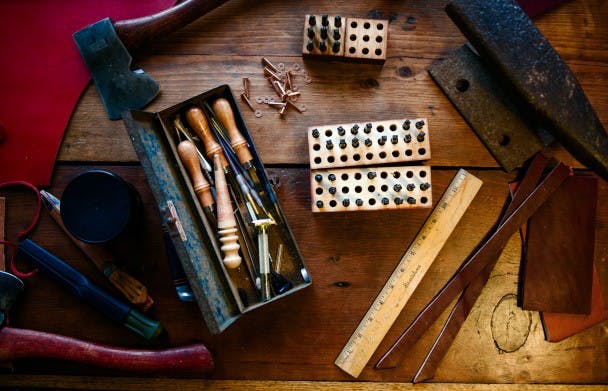 Describe a perfect day for you?
Oh boy, that’s a big question. I’m pretty sure it involves sunshine, mountains, water, and nudity.

Do you have any advice for people trying to follow their passions?
In the last couple years I’ve begun to think that it’s almost less important what you are doing, but just that you’re putting your all into doing it. Yes, of course you must love it. That’s most important. But what’s holding you back? Usually fear, I’ve found. So you take chances and live. If you truly love what you are doing, and you are truly passionate about it, and you truly put your all into it, then you cannot fail. People will be inspired by you and support you. And if you don’t find the success you had hoped for, then you will at least have taken a journey worth taking and learned lessons worth learning. The important thing is to get started. Do it, make it happen. The only thing stopping you is yourself.

If you weren’t working with NW Axe Co. what would you be doing?  Where would we find you?
I’ve been a teacher for Seattle Public Schools for a number of years, and am still currently a substitute, so teaching would be a good place to start. I also work part time at a climbing gym and do photo production work. But honestly, regardless of the work, you’d probably find me in my workshop tinkering with something, or preparing for a motorcycle trip. If I could ride a motorcycle around the world for the rest of my life, I’d do it and die a happy man. Maybe you’ll find me following that passion someday… 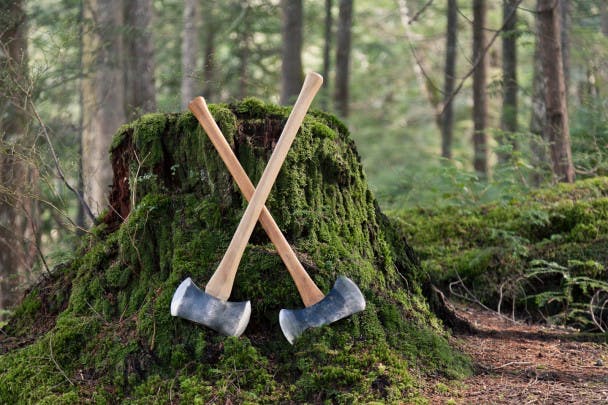 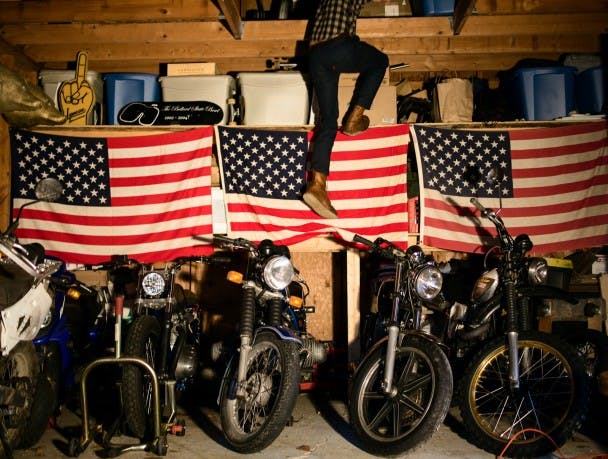 Tricks of the Trade: The Original Multi-tool