Larry McKurtis is a writer and amateur photographer living in Northern Nevada. He prefers sleeping in the dirt, pushing himself to delirious exhaustion, and getting to the marrow of the matter at hand. Aside from writing he’s an avid cyclist, wood worker, hunter, and fly fisherman. These activities give him an excuse to travel and explore the American West and North America. His blog Red Legged Devils covers his experiences in the out of doors.

We crested the 11,000 foot summit in a thick bank of clouds, the dog vanishing from left to right as she worked the plateau for scent. I was tired but the dog sure wasn’t. She seemed oblivious to the five digit elevation and the many rocky, thorny miles we covered the previous day. The hard earned sweat equity spent to get here combined with the potential for a shot at a himalayan snowcock kept my feet moving across the scree and talus. We inched quietly toward precipices and towering cliffs that appeared and vanished as the clouds rolled through us. Despite her pronounced forward keel I kept the dog tight to my side when we thought we were drawing near one of these sheer drops.

Aside from the hushed roar of atmosphere brushing over us it was dead silent. That loud silence that becomes a strange lovely tinnitus to me. We could see signs of civilization through the gaps in the clouds below us. Still life scenes of ranches barely changed since the west was still wild. A highway that could pass for a slow-motion ant trail. Circular hay fields with pivot sprinklers that looked like strange green clocks, reminding me that time was irrelevant here. Somehow the world below couldn’t be the same one we were standing upon. The snowcock weren’t the only living ghosts in this lonely place.

The high peaks of Nevada’s Ruby Mountains aren’t easy on anything but the eyes. They rise up more than a mile from the valley like a row of gnarled hands trying to pull the sky down, which is something they often do. Last year we were greeted by a couple of feet of snow and single digit temps. It didn’t bother us enough to leave and we hunted until the third day brought 70 mile per hour winds that sent us scurrying from the high and lonely into a crumby pizza parlor and a few delicious pitchers of beer.

On this trip we were greeted with hot temps and an improvised bushwhack route from the valley to the crest. I’ll be honest and say it was a nasty approach to base camp, running out of both trail and water while fighting up a steep brush choked hillside with overloaded packs. A lot of the activities my friends and I consider “fun” are exercises in delayed gratification – it’s 90% uncomfortable and painful while we’re out doing, and 100% worth it when it’s all said and done.

We bagged two ruffed grouse for supper and ate the liver for an energy boost. As the evening approached we found a tiny spring and above it enough flat ground below the summit for a fire and two tents. After a satiating grouse supper we crawled into our tents and dozed off.

We awoke before dawn in the middle of a cloud bank and the sky opened up minutes later. These mountains don’t make anything easy. The next few hours were spent in our tents, debating our options as the rain came down. We got a break in the storm and the clouds around us broke apart. We quickly tore down and packed our gear. No sooner had we shouldered our packs when the clouds came rolling over the mountains and enveloped us between camp and the summit of the peak. We took shelter under an overhanging boulder as the dog whimpered and stared at us. We had just loaded the shotguns while leaving camp, and for her that’s the signal to go like hell. Poor dummy has a bigger heart than I could ever bear, and that’s why I love her. You can’t fault a bird dog for its enthusiasm in its inherent purpose, you can only fault yourself for your jealousy and inability to always live to their one true standard.

We summited about a half hour later, the clouds around us just starting to break and blue sky visible 50 miles to the south. We approached the first ledge we planned to hunt and quietly chuckled at the view. It was finally time to start searching for our elusive target -<em> the himalayan snowcock.</em>

Not many people, seasoned upland hunters included, have ever heard of this magnificent bird. Even fewer have hunted them. As the name implies it’s native to the Himalayas and thrives in steep rugged terrain up to 16,000 feet. They are a large bird, averaging 6 pounds and standing as tall as your knee. They have sharp vision and spook from great distances, and fly faster than eagles. I’ve even heard of them out-flying helicopters. They act like their cousin the chukar, but on steroids. They live on twice as high and three times as gnarly peaks. If you’ve ever hunted chukar you might have an inkling of what we’re dealing with. In the 1960’s the then Nevada Department of Fish and Game began a program implementing the release of exotic game species into seemingly game barren habitats throughout Nevada, including the snowcock. The birds took root only in a few of the Nevada’s most rugged ranges, mainly in the Ruby Mountains. It’s the only place in North America where you can find them in huntable numbers. As far as those who have chased them are concerned, myself included, they are the hardest game animal to harvest in North America. Some people kill them on their first attempt, and I encourage these lucky souls to immediately hit the roulette tables in neighboring Elko. The majority of hunters go for years, decades, even lifetimes without connecting a shot on one.  In the past 30 years less than 300 of these birds have been reported harvested – It’s truly an achievement to put one in your game bag.

We spent the rest of the morning slowly stalking the tops of peaks and high cliffs, gently peaking our heads over the edges and scanning for birds. I hopped down to an exposed ledge in the middle of a vast sheer cirque and heard the hurried wingbeats of large spooked birds disappear into the clouds below, never getting a look at them. We covered all the high ground in the area and hiked down a steep scree face to our intended base camp near a cutthroat laden lake. It was a sight for sore eyes and dry throats.

We set up camp as the sun finally came out and laid our gear through the trees to dry. After a hot lunch we headed to the lake to catch dinner. Jesse heard some birds calling from somewhere high above, but we couldn’t pin point exactly where they were. They probably saw us at the lake and flew a few peaks over, but we’ll never know where they went. These birds are sharp.

We headed out to scout and hunt some different terrain and that feeling I crave the most began to hum in my brain. The knowing admission that I am insignificant, inconsequential, and so very, very temporary here. These mountains were here long before humans walked and will be long after we cease to exist. Lightning began to flay a salt pan 60 miles away, the hushed rumbles echoing minutes later against the cliffs above and our lizard brains within. I stared into that distant static black storm as the sun began to disappear in fresh clouds above us. I thought of my favorite applicable passages from Blood Meridian and wished Cormac could see this. We stuck out like fleshy lightning rods on this vast hanging valley, and camp was calling. It began to rain as we double timed back to the false safety of our synthetic hovels.

We spent the evening and night confined to our tents as the rain and wind duked it out with the mountains. The lighting came but lucky for us it was sheet lighting bouncing from cloud to cloud and briefly illuminating the interior of our tents like flash bulbs. Eventually the night calmed into that tinnitus inducing silence I welcomed earlier and we drifted off till before dawn.

In the morning we began the long trip home. We took a route out of the mountains that might put us on a few feeding snowcocks, but they never appeared. We came down to the main trail and spent the next few hours popping our ears and shedding clothing as we dropped nearly a vertical mile to the welcome sight of the truck. We weren’t even finished changing and loading up for the drive back when we started analyzing this trip and what we learned, and when and where we will return.

I’ve never talked to a person whose eaten one because most successful hunters have them mounted. When I do get one I’m going to enjoy every damn bite. I’d have to eat about 100 of them to replace the calories I’ve burned chasing them, but for now I’ll settle for one. I’ll have the cape and skull preserved, maybe tie some special flies with a few choice feathers. But these future plans will have to wait till the next trip, when I hope I can lay my claim on the greatest prize in upland bird hunting. 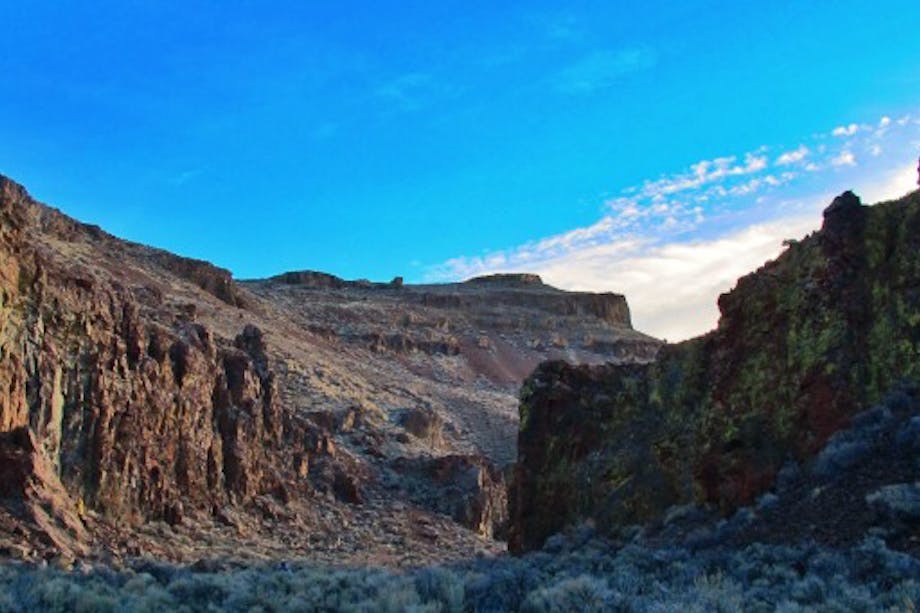 Bounty in the Big Empty: Chukar Hunting in Nevada with Larry McKurtis

Larry McKurtis is a writer living in Northern Nevada. He’s an avid cyclist, hunter, and fly fisherman – all of which give him an excuse to travel and explore all over the west and North America. His blog Red Legged Devils covers his relationship with the American West. Desolation is a frightening word to the