Dick Robertson is the owner and founder of Robertson Stykbow in Forest Grove, MT. Dick has been designing and crafting some of the most beautiful and high-performance traditional bows for the last twenty-five years. We sent Joel Caldwell to spend a few days on the Robertson ranch to discover the passions of the man behind the bows.

Dick Robertson believes in manifestation, though he doesn’t use the term. “If you want something to happen, you have to think about it, talk about it,” he tells me firmly. Before a hunt in Alaska’s Brooks Range, he did just that and ultimately took a sheep with a bow he’d made himself from animal sinew and yew wood. No small feat with such a primitive weapon. What’s more, his son Yote took a sheep on that same trip—also with a traditional bow—a sacred and rare experience for the two of them.

I recently made the trip to central Montana, to Robertson’s thousand-acre ranch outside the fading town of Forest Grove. It’s here that Robertson has built some of the most beautiful, high-performance traditional bows in the world for the last twenty-five years—just over half his career. It’s also where he hunts, and where he raised his family. Robertson is a character, a spiritual guy, who has likely raised some eyebrows and ruffled a few feathers within the straight-laced ranching community he calls home. It’s not that he hasn’t tried to be friendly—he’s quick to point out the rain gauge that he installed for the sole purpose of giving him something to talk about with his neighbors—he’s simply cut from a different cloth.

I spend two nights at the ranch, sleeping in the family’s old camper van, Pleasure Way. Our conversations range from portentous owl sightings to epic hunts in Siberia shortly after the fall of the Soviet Union. We wander the acreage—good steep draws and aspen, excellent wildlife habitat—shooting stumps with Dick’s daughter Yana, an accomplished trad bowhunter in her own right.

Eventually, over the course of a couple days, Dick reflects on his forty years as a bowyer.

Robertson grew up in Wolf Point, Montana, on the Fort Peck Indian reservation. “All my buddies wanted to be cowboys—I wanted to be an Indian,” he tells me. When he was six years old, his father cut a branch off a cottonwood tree, strung it up with a chalk string, and made some square arrows. In short order young Dick had skewered a cedar waxwing. Having an interest in taxidermy, he stuck the bird in his parents’ downstairs freezer. “It was there three years. Then one day it wasn’t. Mom threw away my first bow kill—I still hold it against her,” he says with a laugh.

When he began hunting in earnest at age eight, he’d often pack his rifle on one shoulder and his bow on the other. “I remember getting out of the truck and there was a buck. I had no interest in shooting my rifle, so I hustle back to the truck to get my bow. Of course, he’s long gone by then.” He abandoned rifle hunting for good in his teens. “For me, trad bow hunting was a way to stay out in the woods longer and enjoy the hunt. Typically, I’d only take a deer in the last two weeks of gun season.”

When the compound bow was invented, Robertson was shooting a recurve. “I read this book, Hunting with the Bow and Arrow, by Saxton Pope—the patron saint of bow hunting. Pope started shooting bows because it was too easy with a gun. Then here they were taking that challenge away too! I couldn’t understand that concept.” So Robertson became interested in building his own traditional bows. “My friends connected me to Dale Jasperson. He took me under his wing and showed me how to make laminated bows.” Dale, also a gem cutter and maker of telescopes, had an extreme attention to detail. “I was a framer and a roofer at the time. I had good skills but I never needed to be too exact. Dale’s precision stuck with me.”

At the point Robertson founded Robertson Stykbow, there were only a half-dozen bowyers in the country. “Compound bows had really taken over, but there was a diehard subset of hunters that kept it traditional.” That first year he built and sold fifty bows. The next year he quit his roofing job and has been working exclusively as a bowyer ever since. When I ask him how many bows he’s made over his career, he pauses, thinks a minute, and with a wry smile says, “Seven thousand, three hundred and twelve” before claiming to have never kept track.

“At one point I was considered the best—and I knew I was.” He glues up a bow as he talks. We are inside his quonset hut, a shop full of exotic woods and materials. “When I started out, people intentionally misled me. Now you can watch how to do it on the internet!” He recounts a story of an old-timer instructing him to make sure the limbs could withstand a thousand pounds of pressure. In fact, it’s more like sixty.

For materials, Dick makes a regular pilgrimage to the Billings area, to a spot where he cuts juniper himself. There’s also red elm from Iowa and myrtlewood from Oregon. He also uses Micarta, an epoxy formed of linen, paper and glue that’s nearly as tough as steel. For the center of the bow he often uses vertically laminated bamboo.

“Forty years ago, most longbows were straight or they had a tiny bit of reflex. I made one similar but improved on that design. It was popular because it was the only bow that dampened the vibration and had more speed.” That’s why he became successful, this new reflex/deflex design. He’s also designed and built recurve bows and a hybrid he calls a Coy-Wolf (coyote + wolf). The longbows are nearly the exact same design they were four decades ago.

“I’m worn out of it now,” he tells me as we sit on his patio in the setting sun watching two diving nighthawks feast on insects. “I have a grandson now to hunt with, and that’s about all I’ve wanted.” But he’s not done yet. Later this summer he’ll return to Alaska’s Brooks Range and take another shot at those Dall sheep. What bow will he bring? A traditional bow, made by an old purist, who still, deep inside, wants “to be an Indian.” 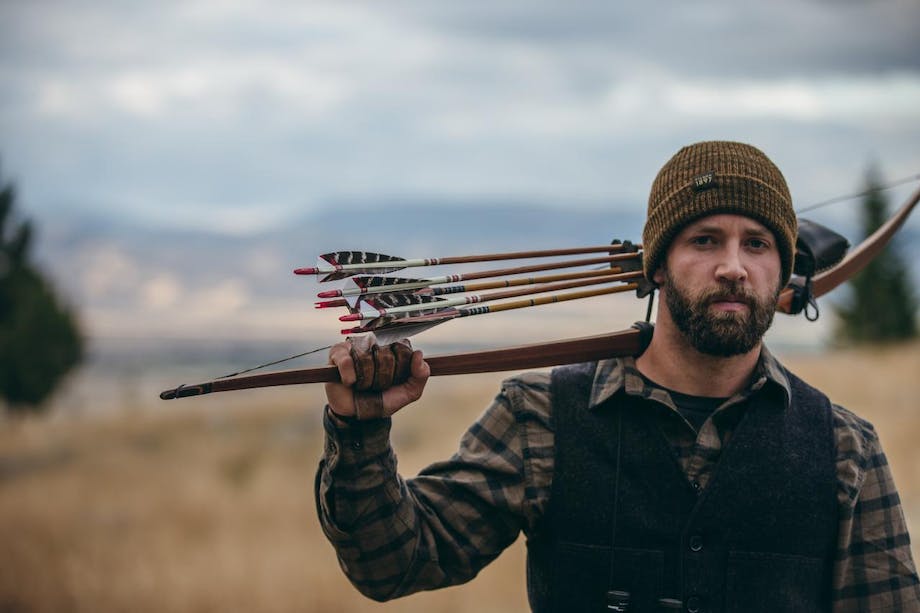 Traditional Bowhunting Q and A with Hunter Rung

﻿ Hunter Rung is a hunting guide and traditional bowhunter from Montana. We caught up with him before he got into the mountains for fall hunting season to ask him about his beginnings with archery and what hunting means to him. Who taught you to hunt? How long have you been hunting? I started hunting