I HAVE BEEN IN LOVE WITH THE MISSISSIPPI RIVER SINCE I WAS A SMALL BOY, TOO YOUNG TO REALIZE THAT THE TRAFFIC THE MISSISSIPPI CARRIES IS MORE THAN BARGES LOADED WITH GRAIN AND COAL, THAT THE RIVER CARRIES ALSO SINS AND SALVATION, DREAMS AND ADVENTURE AND DESTINY.

But in how I was treated as I paddled my canoe, stopped and chatted, stopped and shared a meal, stopped and was invited by the people I met, I found the beauty of the Mississippi I sought, and perhaps a little of the salvation as well.

When people learn that I’ve canoed the length of the Mississippi River twice, they immediately want to know why. Why would I want to canoe the river in the first place? And then, why in the world would I do it again?

Because it is there, of course, and because – now that I’ve done it – I think it is something every American should do. What better way to know this country? What better way to learn who we really are, stripped of artifice and bravado and the nightly news? Just one man and his canoe and his river and the people he meets along the way.

There were thirty years between journey one and journey two. The river had certainly changed. I often wondered  what had changed, and how much. That was the reason for the second journey: To see and mark those changes.

You see the river as if in cross-section and with it, the country as a whole, in its many incarnations – from the cold, industrious North through the hot, spicy, fried food Deep South to otherworldly New Orleans and on down to the Gulf.

The river of course, like every living creature on the planet, is a constantly changing, constantly evolving entity. Every year brings new seasons, every season brings floods and droughts, erosions and displacements; every day, every minute, every second, is a new beginning, a new opportunity for the river to cut corners, straighten itself and shorten its journey to sea.

Thus, the river the second time down was not the same river I canoed thirty years earlier. Nor could it ever be. The fantasy I had entertained turned out to be badly miscalculated. I could not, in fact, pinpoint trees and sandbars I had seen, nor locate the places I had camped the first time down. The river in places had shifted its course. Houses that now line the river had not been there before. The riverbanks were much more developed than I remember from the last time. And hidden beneath the surface of the water, an invasion of Asian carp had come to the river— the result, they say, of the flooding river passing over catfish ponds where the carp were used to keep the ponds clean. When the flood waters receded, the carp were washed into the river, where now they are creating a serious ecological disaster.

Natural occurrences or manmade, I learned that the river was not the river I thought I knew.

Nor is the Mississippi the same river from top to bottom, from source to sea. It begins in northern Minnesota, an insignificant little creek barely five meters wide spilling out from Lake Itasca. It ends in the Gulf of Mexico, not only as a huge behemoth of a river, physically, and not only as what is arguably one of the most important river-y waterways in the world, but also as an outsized myth that matches the outsized myth of the country. It might be the only river in the world that is as wild as it is canalized, as savage and natural as it is urbanized and industrialized, as important to the commerce and trade of the country as it is to the country’s history and mythology and even its origins – it was, at one time, the boundary of the frontier, then a barrier and separator of east from west, then a transporter and linkage, north to south.

It is in canoeing the Mississippi and being on it and up close that you see the river in its various modes, as one thing and another at the same time. You see the river as if in cross-section and with it, the country as a whole, in its many incarnations – from the cold, industrious North through the hot, spicy, fried food Deep South to otherworldly New Orleans and on down to the Gulf. From any one spot, you may love the river as I loved it as a boy. You may love it in the same way that you may love your part of the country. You may even know it as intimately as you may know your own plot of earth, may dig deep into it and know it with the slow plod of a turtle whose acquaintance and experience with an area gives depth but not breadth, which is equally valuable in a country as vast as ours.

But in traveling the river’s length, as in traveling the country, you get a sense of the whole, section by section, and more slowly on the river than zooming the countryside by car. And you cannot know this country if all you know is your little corner. You cannot know and understand these United States if you do not come to this river and know it. For here along the Mississippi are many of the country’s sins, from slavery to mistreatment of the Indians, borne by the river like other cargo.

Historically, there was a need to maintain a 9-foot- deep navigation channel. The Corps of Engineers has built along the Upper Mississippi a series of locks and dams, transforming the river into a connected series of lakes. While the headwaters are wild and pristine as you are surrounded by the simple beauty of nature, the urban sections of the river are developed and civilized. There is a beauty there sometimes too, a manmade beauty which is not at all the beauty that comes with the serenity of being in nature. When the river is a little creek winding though the rice fields, when the river begins to widen out and there is nothing on either side but trees and tall grass, when the river opens up and becomes the behemoth — in fact at every turn, there is something to marvel at, something that takes your breath away.

Here too, along this river, within this mighty struggle to control the river while the river struggles just as mightily to be free, might also be the country’s own struggles and possibly its salvation.

Below St. Louis, the Lower Mississippi is wild again. There are few roads that flank the river, and fewer towns. The river is wider and deeper, but not entirely free. The Corps still has the job of keeping the river from becoming totally free, from washing out farms and invading city riverfronts and eventually diverting itself down the Atchafalaya and therefore bypassing New Orleans on its way to the Gulf of Mexico.

Here too, along this river, within this mighty struggle to control the river while the river struggles just as mightily to be free, might also be the country’s own struggles and possibly its salvation. When people ask me what is the most beautiful part of the river, they will also ask how people treated me, a black man, alone and vulnerable in a canoe. For all the splendor of the river and the various types of beauty, I cannot remove myself from the experience itself and separate out one section of the river from another as the most beautiful, nor separate the physical attributes of the river from its spirituality – which revealed itself in how I was treated, first time down same as the second. Perhaps river people -– people along the Mississippi River, that is — are different from the rest of the people in other parts of the country. Perhaps not. But in how I was treated as I paddled my canoe, stopped and chatted, stopped and shared a meal, stopped and was invited by the people I met, I found the beauty of the Mississippi I sought, and perhaps a little of the salvation as well. 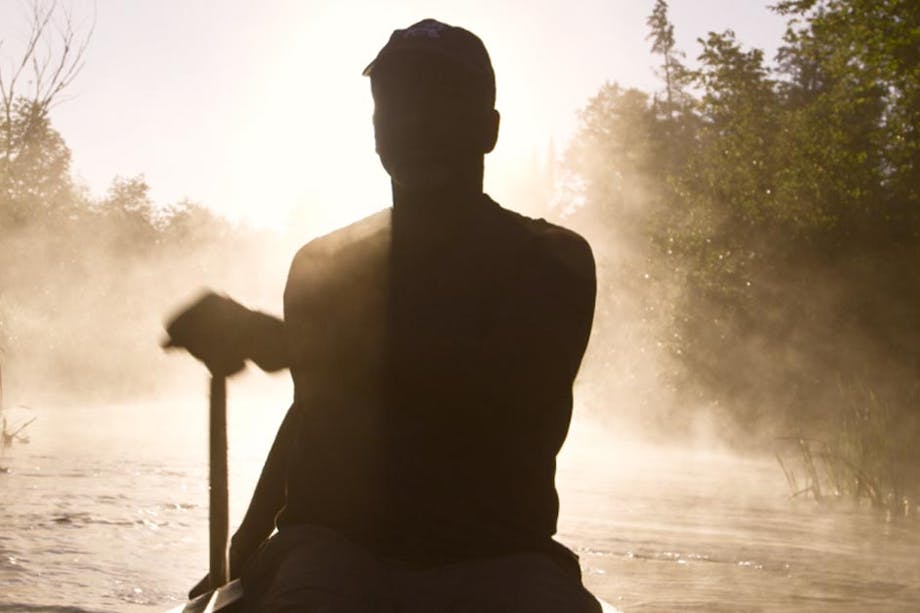 Why We Must: On Diversity in the Outdoors by Eddy Harris

“It’s easy to imagine that Black Americans don’t ski, don’t fly-fish for trout, don’t camp out, don’t kayak or surf, and don’t appreciate nature – don’t do a lot of things. Somewhere along the way, the Black experience, at least in the eyes of so many people – Blacks included – became an urban phenomenon, as if living in cities precludes the desire and possibility of re-creating in the great outdoors and appreciating the natural environment.

I have done all of those activities, and then some. I fish, I camp, I hike in the woods, I hike in the mountains. I even like opera. I have canoed the length of the Mississippi River twice. If there is a reason we don’t see Blacks taking part in a lot of those activities, perhaps it has more to do with economics and exposure and less to do with the activities themselves.” – An excerpt from Why We Must, by author and storyteller Eddy L. Harris. 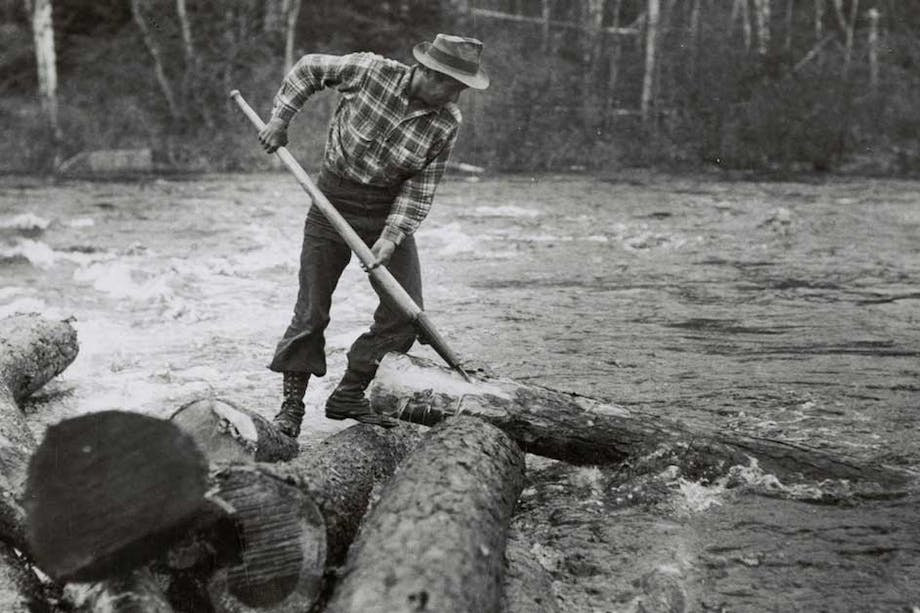 Fill a forest with five-hundred-year-old trees, up to a few hundred feet tall. Season it with native Americans, native-born pioneers, and immigrants from every corner of the Atlantic and Pacific. Into this wilderness introduce sharp tools, ornery teams of oxen and several thousand-pound logs pulled by wire and chain under tension. Add steep hills and log-filled ponds, rivers, or bays, where even a nimble logger might slip. While you’re at it, drag through a testy steam engine throwing sparks into a forest dry enough to be a tinderbox. Then borrow some sailors who speak and weave in the local jargon. Sequester these workers from the rest of civilization for months at a time. Distilled from this mash came the language of the North American logger.

A few of these words tramped out of the woods and joined the larger culture. Perhaps you’ve flung a few around yourself, without noticing the sawdust that clung to them. 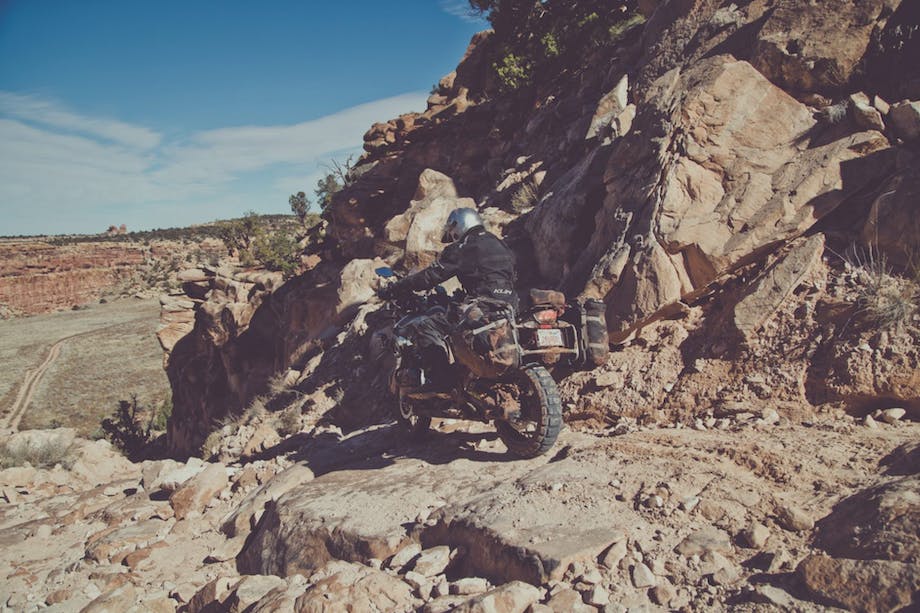 It’s often easy to get lost in the severe beauty of southern Utah in the high desert lands of the Colorado Plateau. The parched and arid red sandstone landscape is unforgiving, mountains and ridges appear everywhere shimmering in the distance, and plunging canyons seem to materialize out of thin air. While it can take your breath away it also demands respect from anyone journeying through it.

So, when four friends decided to take their off-road motorcycles on an epic weeklong trip across this region, they knew that things could and would probably go crooked quickly. But that is the beauty of doing the Utah Traverse.

Make Mine “To Go”