Before Matt Mendes guided on the Deschutes River, he drove the Green Monster. It was 2002, and Mendes was 13 years old; the job was his first on the river. The Green Monster, an old Ford F350, nicknamed for its paint job, belonged to his maternal grandfather, Al Bagley, a revered fly-fishing guide and a member of the Confederated Tribes of Warm Springs. The tribe governs the 1,019-square-mile Warm Springs Indian Reservation, located in Oregon’s high desert and bound to the east by the Deschutes, one of the country’s premier steelhead and trout destinations. In 1997, Bagley became the tribe’s first fly-fishing guide, capitalizing on its exclusive access to 22 miles of the Deschutes’s west bank, per an 1855 treaty with the United States government. The business was gangbusters from the get-go.

Bagley, who’d previously worked at a lumber mill, would bring in non-tribal anglers, eager to fish for the reservation’s overfed, and largely unpressured, steelhead and trout. Mendes, in turn, was tasked with dropping off the group at the put-in, then motoring the Green Monster down to the take-out, never mind that he didn’t have a driver’s license. As he waited for his granddad’s drift boat, he passed the hours learning how to cast, mimicking the out-of-town anglers he saw on the river. Mendes had no clue at the time, but “we were fishing with some of the top fly fishermen in the world,” he recalls. Soon enough, he was trying to land trout from a big back eddy, which afforded plenty of chances to hook up. There were so many fish, he says, “all you would see is fins and tails.”

MENDES HAS MADE A NAME FOR HIMSELF
BY REGULARLY
HOOKING 25” TO 40” STEELHEAD,
SOME TOPPING 14 LBS.

He was a quick study. Now, at 30, he’s carrying on his grandfather’s legacy as one of the Warm Spring Reservation’s two permitted fly-fishing guides (spinthehandle.com). Mendes, who’s of Wasco–Modoc Indian and Portuguese descent, has made a name for himself by regularly hooking 25- to 40-inch steelhead, some topping 14 pounds, during the fish’s fall run up the quick, dangerous Deschutes.

The summer morning we talk, on one of Mendes’s rare days off, he’s busy preparing his drift boats for a few upcoming floats. He lives on the Warm Springs Reservation with his wife and three children, with a fourth on the way. For one reason or another, few tribe members fly fish, Mendes explains, but “there’s been Indians on this land for a long time,” and they were no doubt fishermen. Mendes, for his part, like many other guides, uses spey rods to swing marabou leeches and other meaty intruder flies for steelhead. But, as if hooking the ocean-run trout weren’t daunting enough, he’ll also throw dry flies when the water hits 55 degrees. “Seeing a fish come to the surface for a dry,” he says, “that’s the ultimate.”

His dry-fly affinity, like so much else, originated with his grandfather, who used to tell clients, “If you can’t catch a fish on top, I’m not doing my job.” Mendes began fishing with Bagley after he moved to the reservation from central California at age 12,. “My parents wanted to get me and my two brothers out of there, to better our future,” he says.

His mother had grown up on the reservation, but the wide, arid country—home to bear, elk, and thousands of wild mustangs—was almost entirely new to young Mendes. His family gathered huckleberries, foraged for morels, and chopped wood. But, for him, fly-fishing with his grandfather was especially formative. In short order, “I caught the bug,” he says.

By age 16, he’d graduated from Green Monster shuttle driver to bona-fide guide. At first, “it was sort of funny to watch,” Bagley tells me later, “because [Matthew] was so small behind the oars.” Still, he had undeniable talent. Sometimes, when clients complimented Mendes, Bagley, hoping to temper his grandson’s ego, would respond, “He don’t need to hear that. Don’t give him too much confidence.”

His granddad is just sort of ornery that way, Mendes says. And, in fairness, Mendes did have to master the finer points of guiding, such as the importance of tying off his boat’s anchor rope in high winds. Once, when he neglected to, he and some clients climbed out of the boat to cast. “The next thing you know,” he says, “I see my drift boat going down the river with nobody in it.” He shed his waders and swam a half-mile to catch up with it.

Such mistakes were rare and seldom repeated. By the end of high school, Mendes decided to make a career of guiding. He worked for his grandfather for about 11 years, before buying out his business in 2016, which allowed Bagley to retire. Steady work can be scarce for the 3,000 or so tribe members who live on the Warm Springs Reservation, especially ever since the tribal-owned Kah-Nee-Ta Resort went belly up in 2018. Guiding, though, keeps Mendes busy. “I’m proud of what he’s done,” Bagley tells me. “He loves teaching people, like I did.”

Bagley logged 20 years on the Deschutes. Mendes, with his early start, hopes to put in twice that before he retires. But “it’s scary,” he says, given recent problems facing the river. Last year’s steelhead season was especially tough, he says, owing, in part, to unnaturally warm waters produced by the upriver Pelton Dam. Commercial fishing, climate change, and downstream dams, which interfere with the steelhead migration, also didn’t help. He and Bagley both recall 15-fish days back in the early aughts. Now three-steelhead floats are typical, which would be impressive almost anywhere else besides the Deschutes. “The steelhead are in dire need,” Mendes says. “It looks like they’re going extinct.” Bagley concurs: “The dams have ruined the whole river.”

Though the Deschutes has changed profoundly since Mendes was a teenager, some things do remain much the same. Bagley, now in his late 70s, doesn’t fish much these days, but sometimes Mendes will pick him up and they’ll drive together along the river, taking the same roads that Mendes once bounced down in the Green Monster. Despite the steelhead downturn, Mendes says that the Warm Springs Reservation remains a place that anglers need to visit and experience for themselves. Once they do, it’ll become clear why his ancestors never strayed far from this land and why, ultimately, he intends to follow suit. “I got a real passion and love for this place,” he says. “I’m not going anywhere.”

BOOK A TRIP WITH MATT
FOLLOW @FILSON1897 FOR MORE STORIES 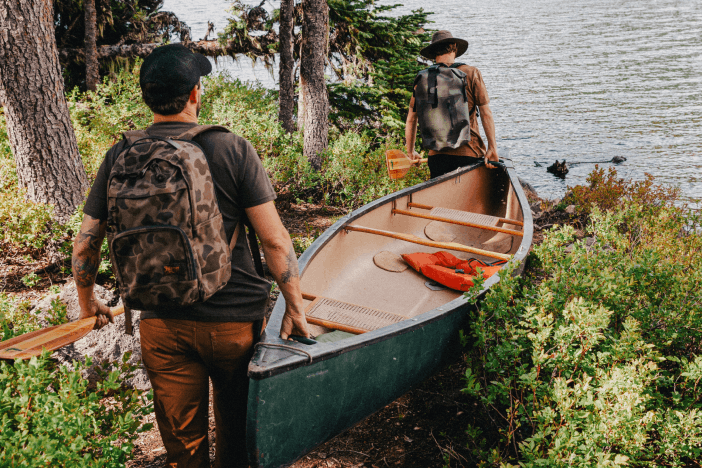 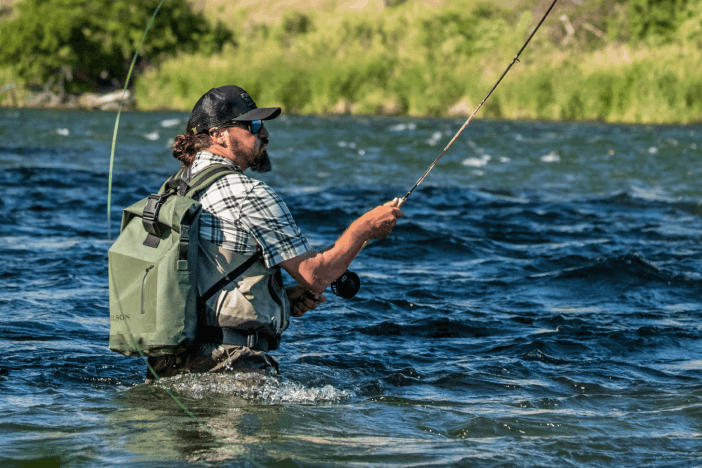 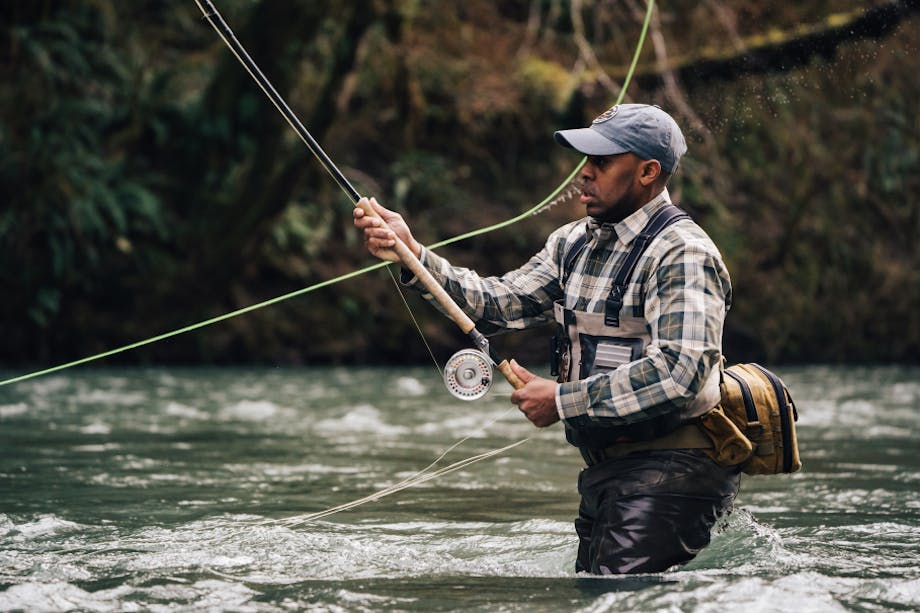 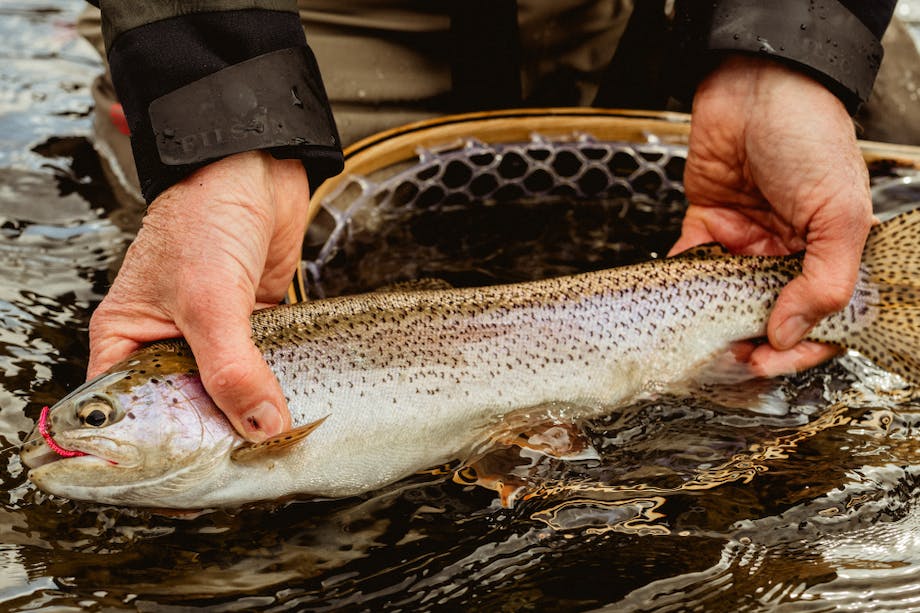 How to Take Care of Your Catch

The ethos of the Leave No Trace philosophy has always struck a chord with fishers like me. From leaving our campsite looking as though no one was there, to gently releasing fish that are unharmed, we strive to harmonize with nature. Big strong trophy fish have the strength and ability to survive adverse stream conditions, water temperatures, roaring flood waters and other seasonal challenges. Smaller fish cannot survive these hardships so well. Consequently, our Leave No Harm handling techniques can contribute to nature’s balance and a healthy ecosystem. 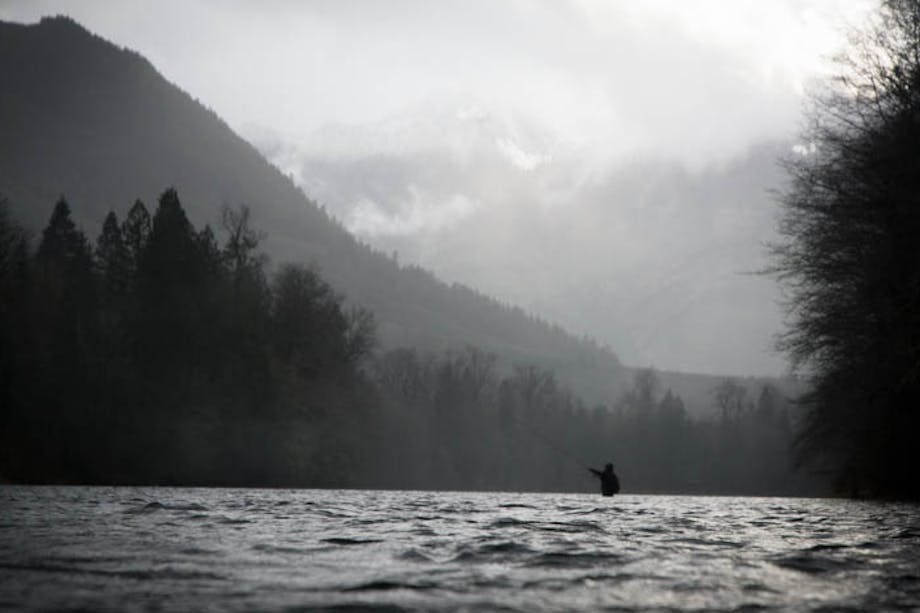