At times, shed hunting can seem a fool’s errand. It can make you wonder why in the hell you’d ever thought it was a reasonable idea. Other times it is quite the opposite; miles hiked and time spent behind glass equate handsomely to fresh brown elk antlers. This trip would lean harshly to the fool’s-errand end of the spectrum. 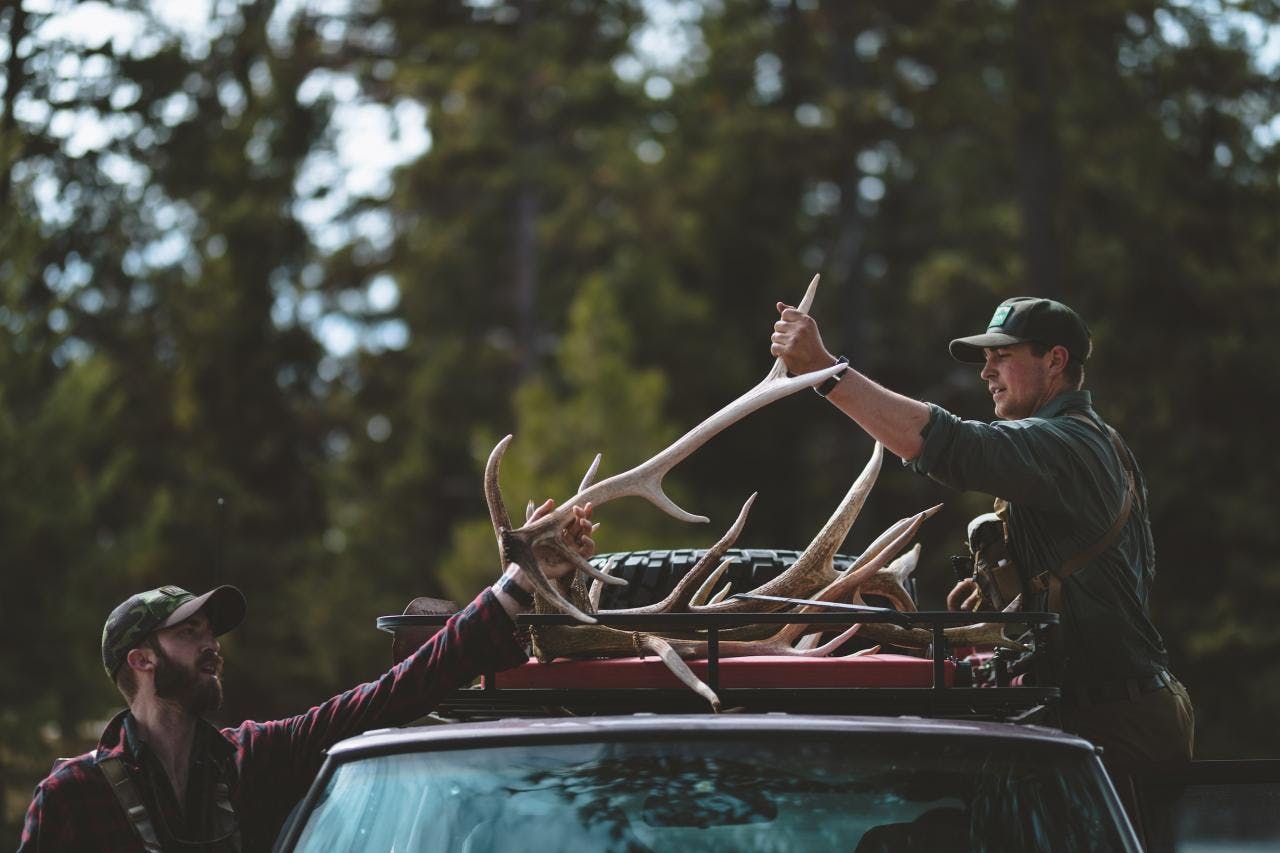 “Hey, man. I think we might have missed our turn,” Kyle mumbled over the prattle of ATV engines. I cast a sideways glance back the way we’d come. “Hmm… shit. Okay.”

For the second time that morning, we turned the four-wheelers and headed back toward the trucks. It was 9:30 a.m., and our best-laid plans for an early start were finished. Up ahead, David clung to the back of Kyle’s four-wheeler as it bounced in and out of snowbound ruts up the old logging road.

On the back of my machine, Craig gripped the matte black bars of the rack with his one good hand. His other hand hovered in limbo, wrist wrapped tight in a hard brace and all but worthless for keeping him attached to our rig. He’d broken it badly when his motorcycle met pavement on an early December morning in Washington. His second surgery was scheduled for the days following our trip, when doctors would remove the four pins, the screws, and the 8-inch metal rod that held his bones in place. 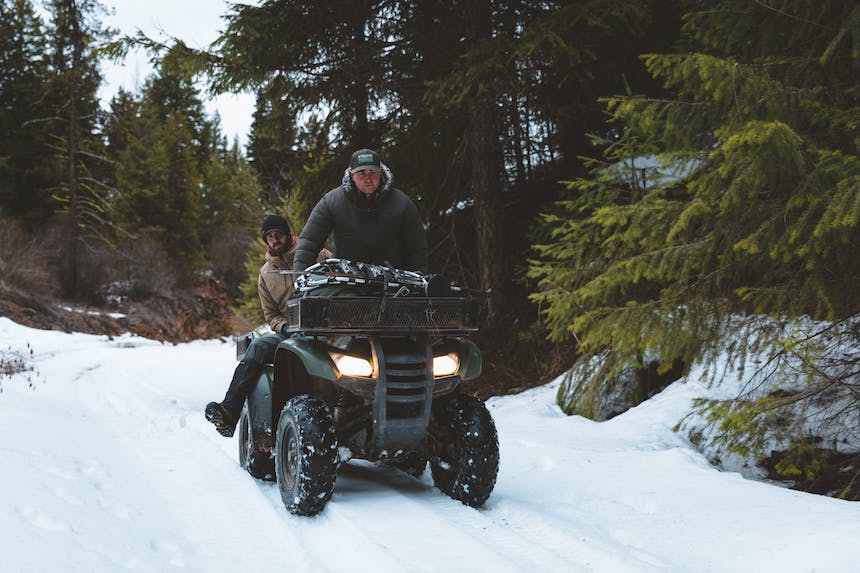 We turned up the desired road, and promptly sunk into the two-foot drift that frequents north-facing slopes this time of year. By now, we had the system down to a science. Without stopping, Craig leapt off his side and I mine. I hit the throttle and we pushed, running alongside until we’d gained enough momentum to clamber aboard. Madly spinning tires spat freezing slush and snow on the four of us. After a half-mile, we were spent.

After catching our breath, we aired down the tires in an attempt to find more traction and climbed aboard once more. The machines pulled forward, biting into the deep slurry, and we made up for lost time.

A neon “Road Closed” sign greeted us as we rounded the final corner. It was to be on foot from there, but we were plenty glad to be rid of the noisy four-wheelers. We strapped on snowshoes and backpacks, checked the map, and leaned into the cold March wind. 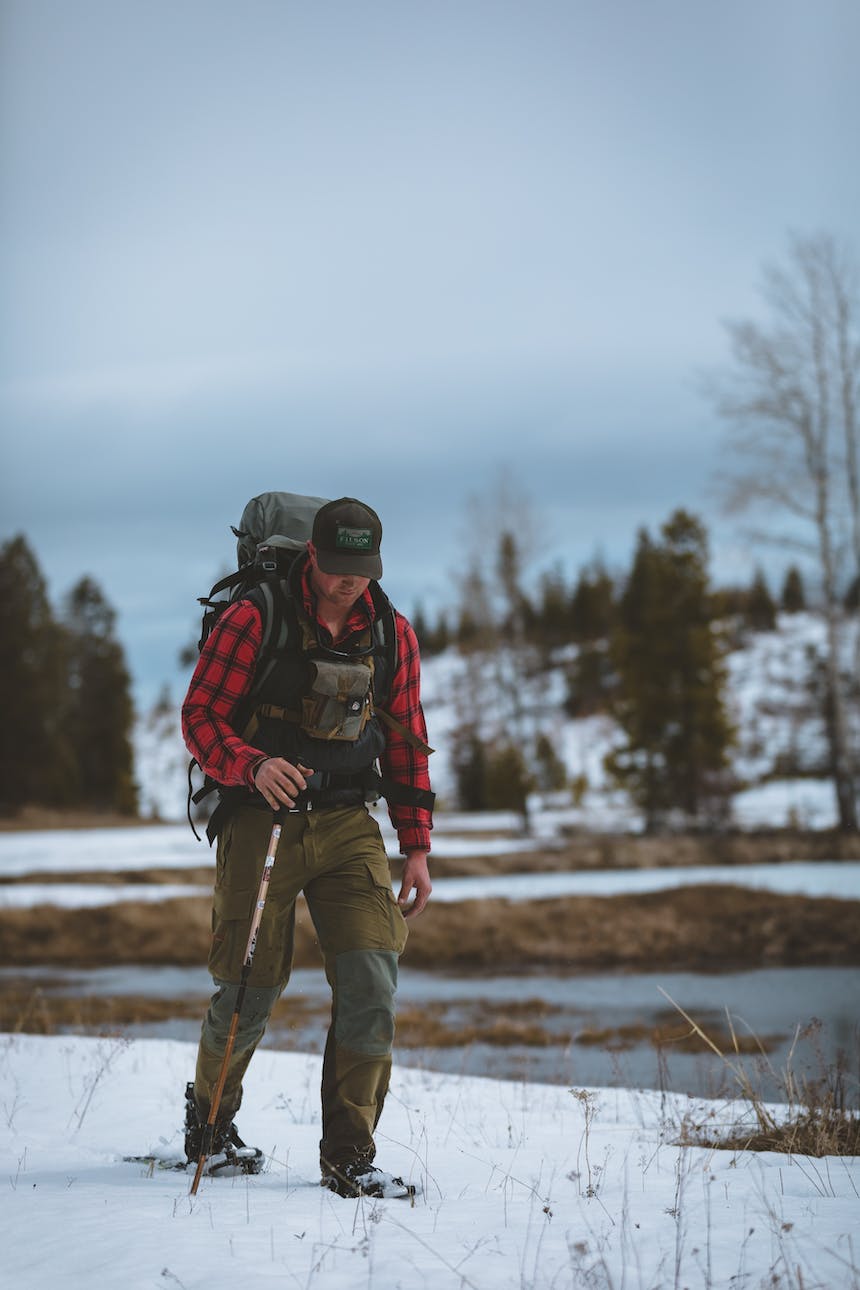 Our goal for the day was to retrieve two antlers Kyle and I had spotted the day prior. I’d reasoned this would be a quick, easy day trip to put us on the board—not to mention a surefire way to show my new buddies I was competent and skilled when it came to finding elk antlers.

Two hours into the hike, I was starting to doubt my decision. Somber faces and few words made it clear I wasn’t the only guy questioning the plan. We’d slogged four miles through rivulets of icy snowmelt and deep drifts, and still the waypoint marking the antlers showed three more miles, minimum. We pressed on, trudging through clear cuts and dog’s-hair-thick patches of fir and spruce. A moody sky spit rain in schizophrenic fashion. 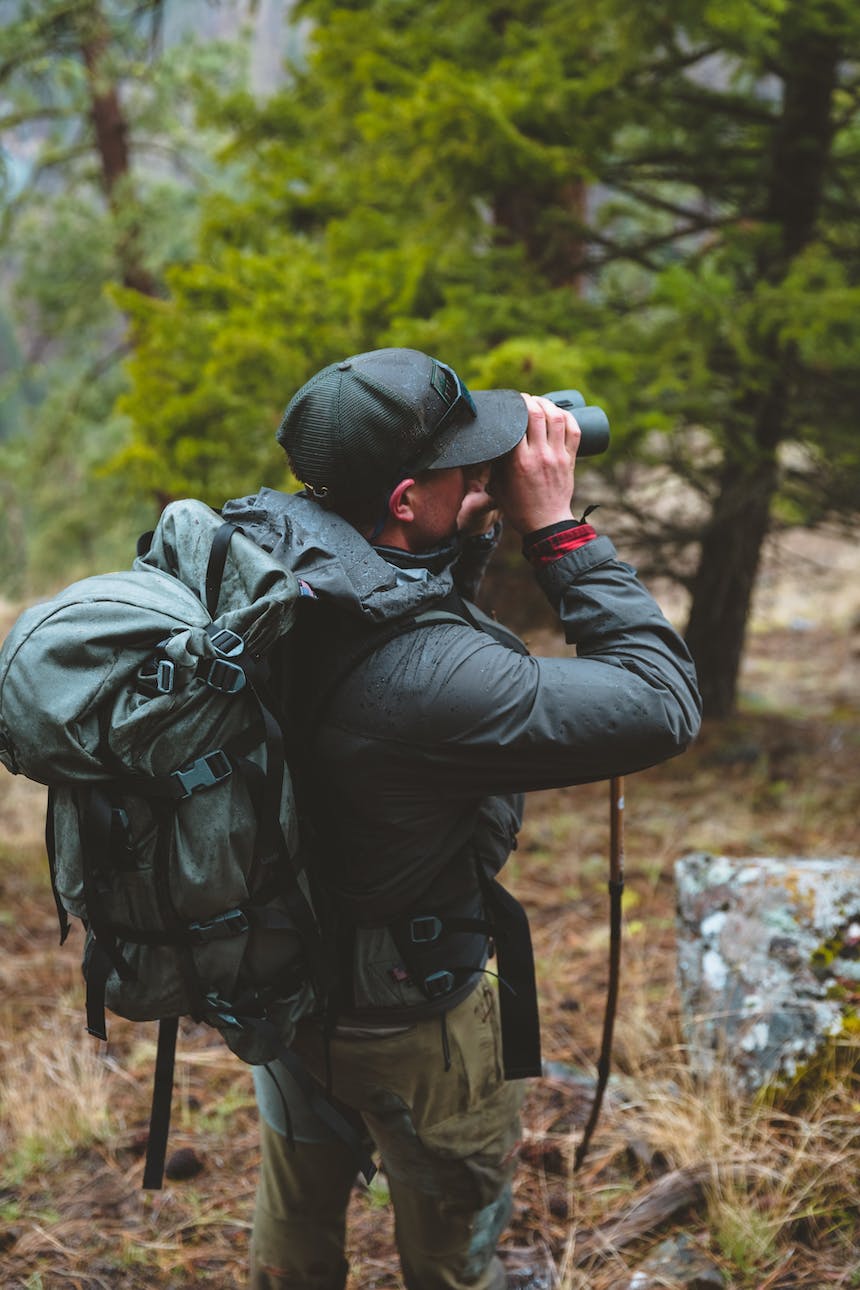 An hour later we reached the edge of the canyon. Now only a mile of side-hilling and a thousand vertical feet separated us and the antlers. The rain fell steadily now, having abandoned its unpredictable attitude for a much less favorable full-fledged downpour. We crawled into a patch of tall ponderosa pines, started a fire and ate a quick lunch.

Satisfied, and somewhat dry, we made our way to just above the antlers. We couldn’t see them, but meticulously chosen landmarks showed us the way—that and GPS technology. Mostly, it was GPS technology.

Boots caked in dark brown mud were makeshift skis, and we slid downslope toward the horns. David and I rounded a sharp cliff, and the better of the two antlers came into view. It was a dandy seven-point antler from the previous spring. Not exactly the fresh brown horn we’d thought, but a gorgeous bull nonetheless. We grabbed the other antler, an ancient, chewed-up, broken-off rag-horn, and headed back uphill. 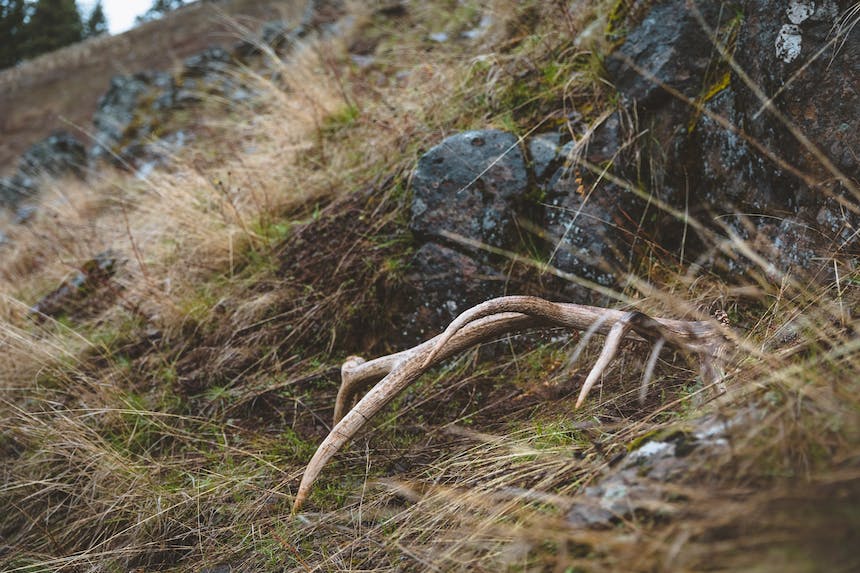 We crawled up the oil-slick hillside and back onto relatively flat ground, turned our faces back into the wind and rain, and backtracked. Abandoning our old trail, we hooked sharply right up a cliff face and onto an old Forest Service road. The swishing of snowshoes on melting snow punctuated the silence in consistent, unfaltering rhythm.

“Type 2 fun, right?” I laughed. The fellas did not. And the scale tipped evermore in favor of a fool’s errand. 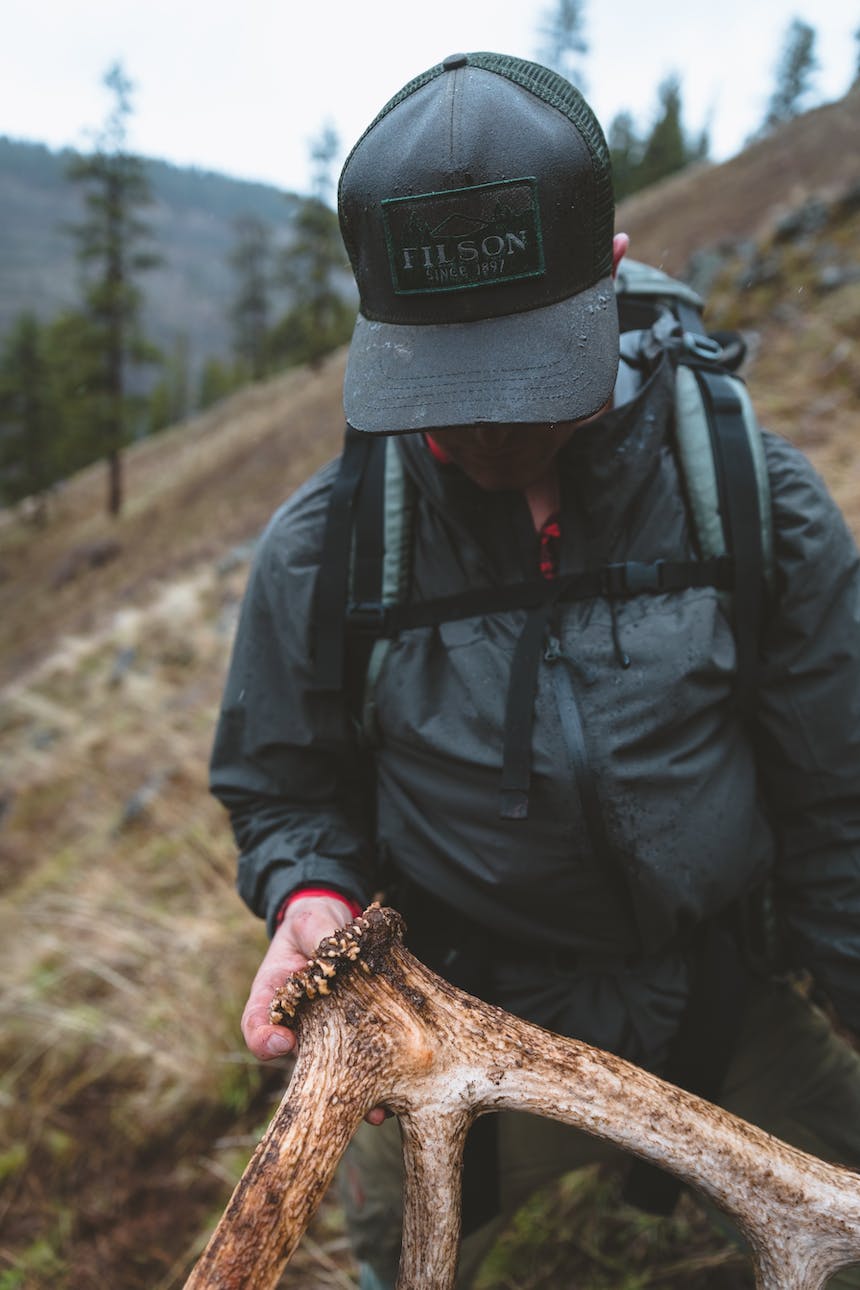 Two hours later we reached the four-wheelers; a half-hour more and we were at the trucks. Our ill-advised snowshoe death march was over, and so was the first day of our three-day trip. Cold beer, dry clothes and truck heaters cranked way right made us feel human again.

The neon bar sign flashed OPEN, and we parked outside. Inside, a young woman swept the floor. We cracked the door. We must have looked a haggard bunch. “We’re still open,” she said before we could ask. We claimed a corner booth and swilled cold beers and scalding hot coffee. More important, we ate. Then slept. 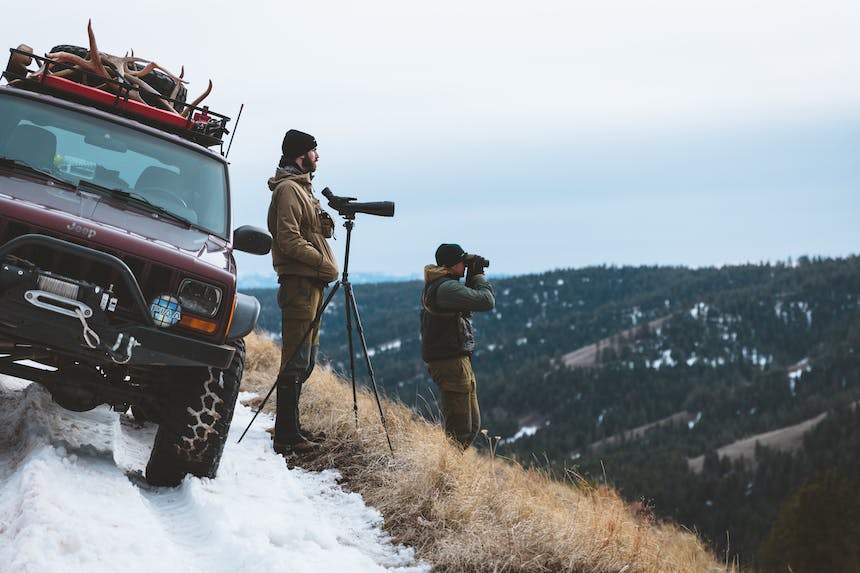 The next two days were a blast. We looked into miles of country, new and old. We picked white antlers from open hillsides and slept out beneath a crisp spring sky. Sore legs, gorgeous views and much-needed respite from paved roads and honking horns were our principal rewards. The antlers—well, those were just a bonus.