Writer Kent Reeves is a wildlife-range ecologist, packer, and cowboy in California. He has been pack guiding in the Sierra Nevada since 1983. Demonstrating the diamond hitch is Trent and Mariah Peterson. In 2017, Trent rode from Mexico to Canada on the Pacific Crest Trail with wild mustangs that he adopted from the Bureau of Land Management (BLM) holding facility in Susanville, California. Mariah played a pivotal role in the endeavor with her years as a professional mule trainer.

Mules have a history of carrying supplies in the California Sierra Nevada. Commercial packing started during the Gold Rush era. Packers or arrieros moved goods between San Francisco and the goldfields. After mining ended, interest in recreational use of the mountains became popular in the early part of the 20th century due to the work of the Sierra Club and its founder John Muir. Pack stations and outfitters popped up at every drainage point near mountain passes and trails along the length of Muir’s Range of Light to accommodate groups of sometimes 200 or more visiting the Sierra Nevada wilderness.

One of the earliest pack outfits was McGee Creek Pack Station, which began taking visitors into the wilderness in the late 1920s. Today almost 100 years later, a trip into the wilderness with pack stock uses basically the same equipment to get you there. In this case, it’s the classic sawbuck pack saddle, with loads slung on either side of the mule and held in place with one of the more popular and common hitches: the Diamond. The only thing that has changed is what the modern visitor brings with them to explore, fish, hunt, and hike this grand mountain range.

Pack trips range from spot trips, where people are dropped off for a set amount of time and later picked up, to all-expense travel trips of longer periods. For those on spot trips, you are responsible for your own food (plan your meals with a menu before shopping) and equipment for cooking, along with essential camping gear. For all-expense trips, you just need to bring your own personal gear, and the pack station takes care of the rest. Most pack stations have a list of what to bring on their websites regardless of the kind of pack trip you choose.

Each mule is fitted with a halter and pack saddle—the time-honored sawbuck here in the Sierra Nevada. This is fitted to the individual mule along with pads; the mule’s name is found on that saddle. Each packer has their own string that they care for throughout the season.

Gear brought by guests is left on a loading dock and packed into panniers or kyacks (bags made of canvas and leather). Food goes into metal bear boxes. No more than 150 pounds goes on each mule. The weight for each bag or box must be fairly equal and so it’s weighed on the dock. A nice light top load, like a folded bedroll, is a good way to end.

The off-side or right side is loaded first, then the near-side (left side). The load is adjusted to make sure it rides balanced. It is then covered with a tarp and finally secured with a hitch; in this case, the Single Diamond, which is considered the most popular hitch in packing. The Diamond is simply a series of ‘following a tight rope so that you don’t overthink it.’

HOW TO TIE A DIAMOND HITCH

1. Standing on the near side, the tail of the rope goes to the tail of the animal.
2. The cinch is thrown over the pack and brought up under the animal and secured to the side-to-side rope with a hook on the cinch and then snugged up.
3. The side-to-side rope is then brought up and doubled to the left of itself till it reaches the “front-to-back” rope, where it is tucked under itself. Remember to pull the underlying “front-to-back” rope up, through, and toward you as you face the mule’s near side.
4. The off-side part of the loop is then passed around the off-side load.
5. Finally, the offside loop is held taut while going under the mule’s neck in order to place and tighten the near-side loop. As you work your way around the load and mule, you maintain a tightness that secures everything to not only the pack saddle but to the mule too. Effectively, you are “chasing your tail” as you tighten your rope.

Having “snugged up” the hitch all around, a final hearty heave is given and the hitch is tied off. The final product is a nice neat diamond in the middle of your top load. The Sierra Nevada Wilderness is truly a place of wealth and not only because of its natural grandeur but also because it’s where mules wear diamonds. 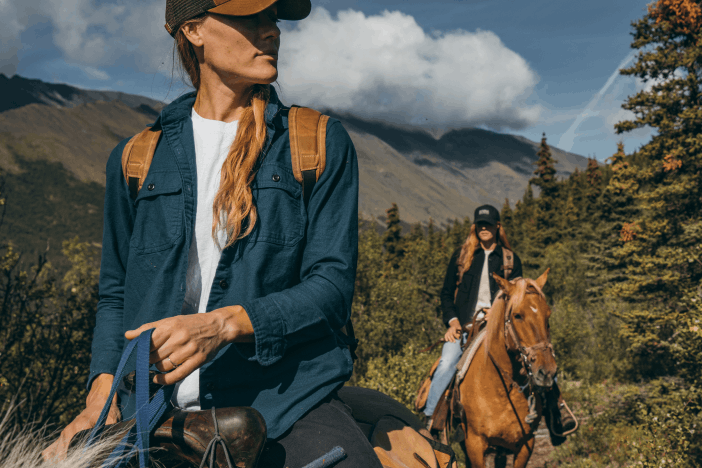 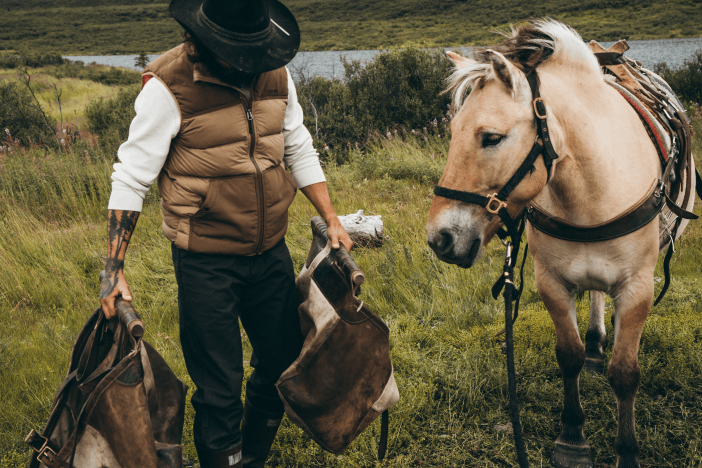 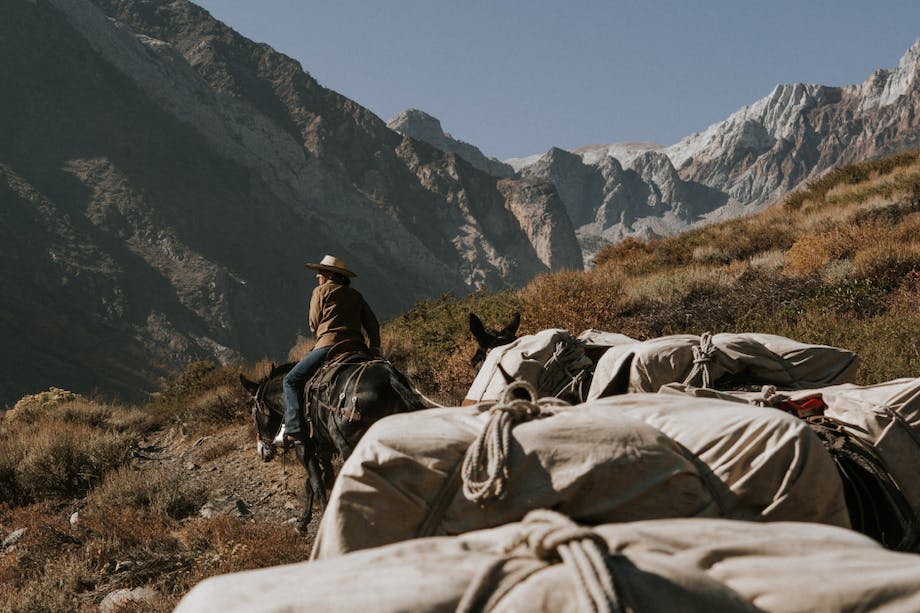 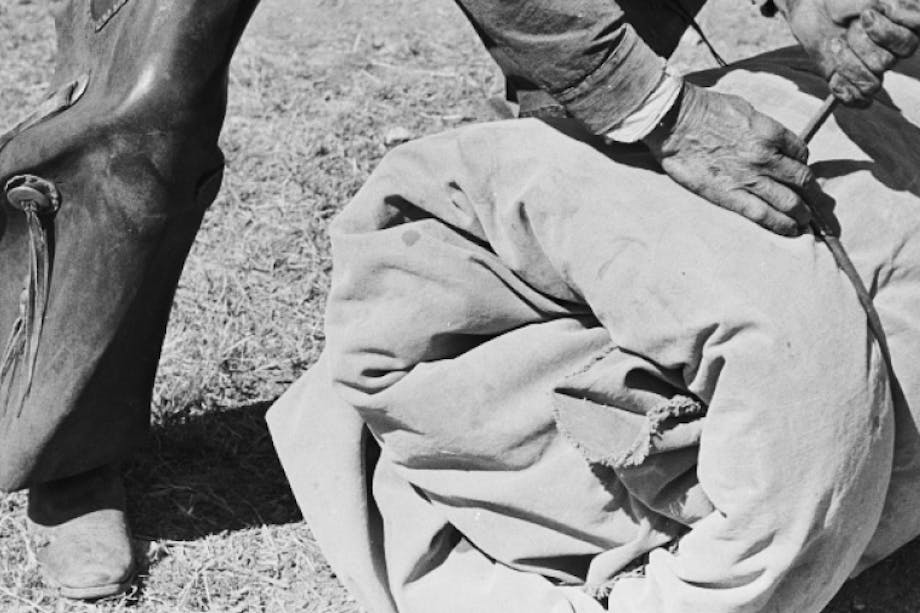 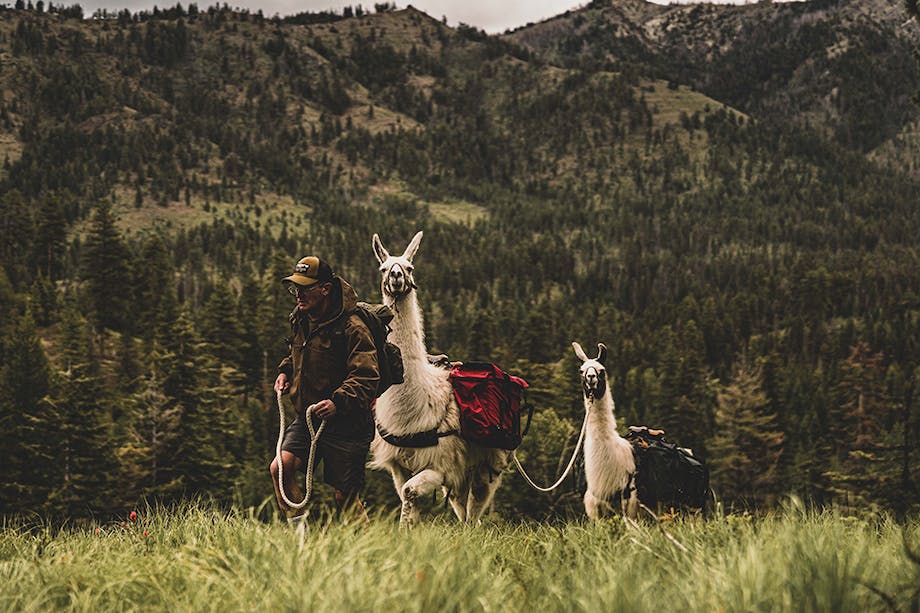 When you first meet a llama, it can be disconcerting. Four long, lean legs merge into a barrel-like body, from which an impossibly long, lean neck protrudes, with a small head perched on top. Two banana-shaped ears stick straight up, each operating independently, like separate radar stations, continually pivoting this way and that as they take in their surroundings. All of this is covered in a shaggy fur that makes the entire creature look like a mad muppet experiment gone wrong. It can throw most people for a loop.

But after a few moments with a llama, all your uncertainties melt away. These highly social Andean mountain climbers quickly make friends with all they meet. This coupled with their sure-stepping stone grabbing hooves, long legs, and bigger bodies, make these Camelids perfect for hauling gear into the wilderness. That’s what drew Charley charley Rosenberry to them almost three decades ago.