One of these new outposts, Coldfoot, became the primary mining camp of the upper Koyukuk River’s middle Fork. This fork was the largest headwater tributary of the Koyukuk, formed by the confluence of the Dietrich and Bettles rivers, with its source on the Arctic divide far back in the Endicott Mountains. An expedition of the region was first made by Second Lieutenant Allen in 1885. From the Copper River, he traversed to Chitina, first by sled and then by boat, and crossed the divide from a point near Kennicott to the Tanana River. He descended the Tanana to the Yukon and continued on the Yukon until encountering a large river flowing to the north: the Koyukuk River. Allen’s journey on the Koyukuk led him to the point where Coldfoot was established as a mining camp.

In 1898, 1,200 miners rushed from the upper Koyukuk to create the Coldfoot–Chandalar Trail extending east from Coldfoot along Slate creek to new diggings on Myrtle, Slate, and Boulder creeks. The majority of these prospectors departed only a year later, disillusioned and anxious to seek their fortunes elsewhere. Of this initial rush, between 100 and 200 hardy fortune seekers remained to prospect along the tributaries of the Middle Fork with Coldfoot as their supplies base.

One of the first major gold discoveries by this wave of prospectors was made by the Dorothy Party (“Dorothy Boys”), who came from Boston, Massachusetts. In March 1899, they struck pay dirt at the confluence of the Slate and Myrtle creeks. The group had sunk 24 holes into the bedrock of Slate creek, each one at an average depth of six to seven feet. Another prospector, Knute Ellingson, made a similar strike that same year on Myrtle creek: a discovery touted as the first “real money” to be made from the Koyukuk.

Coldfoot was at the center of this activity, which went through several periods of stampedes and an influx of new miners, only to recede at other times to just a couple of hundred camp residents, who were determined to stick it out over the long haul. In 1900, word spread of 1,900 ounces of gold coming out of Myrtle creek. Again, a stampede of 1,000 new fortune seekers came up to Coldfoot some 175 miles above the Arctic Circle to prospect the Koyukuk River and other tributaries where gold was found, including Slate and Emma creeks.

Another rush for gold occurred in the region in 1905, when miners followed the Coldfoot–Chandalar Trail to reach the diggings discovered northeast of Chandalar Lake. Coldfoot itself lay at the mouth of Slate creek, where it joined the middle fork of the Koyukuk River, where a narrow mountain valley widenes out and its gravel flood-plain coalescences with the widespread sheet of outwash gravel deposits.

One of the reasons Coldfoot did so well as a supply outpost was its remoteness. The cost of getting supplies through terrain that alternated between frozen rivers and fields of ice and snow in the winter and boggy woodlands infested with swarms of biting flies and mosquitos in the summer was equal to the entire cost of hauling supplies via boat from Seattle to Bettles, Alaska. The last 65 miles from Bettles to Coldfoot had no option for water transport, road, or railway, leaving goods and provisions having to be carried by dog sled, horse, mule, or on one’s back. Even mail was difficult to deliver. In 1905, the explorer Hudson Stuck described how mail went by postal courier once a month from Fort Yukon, first traveling 250 miles from there to Bettles, then further up the Koyukuk to Coldfoot. Another author, Lanier McKee, recalled from his diary of 1900 in Nome, Alaska, that the selection of what supplies to carry needed to be done with the utmost care “in that impossible country,” no matter how short the distance, given the transport difficulties and the expense involved.

Once a prospector reached Coldfoot and its surrounding network of trails to the gold claims, they needed tools, such as picks, pans, shovels, rockers, and sluice boxes, to pull gold from stream deposits, or out of the ground via shafts sunk into the bedrock and quartz through the frozen, top permafrost layer. Water for “placer mining” involving such shafts was mainly derived from snow and used to wash away dirt and heavier rock to expose the gold as flakes, dust, or nuggets. Any gold collected was then stored in long bags called “pokes” made of either leather or buckskin. One account from 1896 described how miners returning from their diggings with their season’s earnings of gold in packs strapped to their backs also carried “big revolvers” and were on constant lookout for nefarious highwaymen.

Some say that Coldfoot, Alaska, received its name because prospectors used to get cold feet in its vicinity and “made tracks” back to civilization as fast as they could. Another story has it that it was Arthur A. Hill, who operated a roadhouse in Coldfoot in 1905 with his wife, who had given the town its name. The winters here were long and severe (from October to April) with the temperature below zero most of the time, but with temperatures as low as below 70 degrees reported at times. The average temperature during the 1890s for the winter months was minus 15 degrees below freezing. During the three summer months from the end of May to early September, the temperature averaged 55 degrees Fahrenheit.

Life in a typical mining camp was no different in Coldfoot compared to during earlier strikes made in the Klondike. McKee’s diary from 1900 tells of the character it took: “hardy, honest people who have undergone privation to reach their destination, and thereby represent, in a measure, the survival of the fittest.” Life among the native population of Alaska was hard for these newcomers, and after just one season, it left changes both mentally and physically on those who remained. In his 1896 expedition account, Josiah Edward Spurr led a team of two others to the interior of Alaska to map and chart the region for the United States Geological Survey and they explored the Yukon Territory as well. After a 15-mile trek to Circle City in one day, Spurr noted the effects of the land when viewed in a mirror at the customs house where he stayed:

“After a bath I felt refreshed but glancing into a looking-glass for the first time in many a day, I saw that my appearance was still against me. I was a long-haired, bushy-bearded, ragged, belted, and knifed wild man, not fair to look upon.”

Another traveler to the Klondike, May Kellogg Sullivan, spent 18 months traveling throughout Alaska over a total distance of 12,000 miles in her adventures. In July 1899, she departed Skagway and ascended White Pass summit via train passage with those newly arrived to Alaska’s shores partaking of foods not soon to be seen again:

“The sight of fresh fruit in the hands of those lunching in the next seat almost brought tears to my eyes, for we were now going far beyond the land of fruits and all other delicacies.”

Of the other men and women who helped establish Coldfoot during the gold rush years, we have snippets gleaned from newspapers thousands of miles away. B.E. Plummer, who ran a store in Coldfoot for five years, noted that in 1909 there were just 250 souls left. A “Mr. Whiteshead” reported in a letter from November 27, 1908, that rich strikes were being made in the Koyukuk country (one pan cleaning up $2,600), and that he sends Christmas greetings to his many friends in Coldfoot along with a plea for Keystone drills to be able to access the bedrock. Another, D.A. McKenzie, positioned himself as a railroad magnate in 1905, with plans to build a railroad into Eagle City, his travels from Coldfoot to New York intended to secure financial backers for the project. Jack Carr, noted Alaska pathfinder and mail carrier, arrived from Coldfoot and reported in 1904 that the diphtheria epidemic at Fort Yukon had been stamped out. There was also a J. Johnson of Coldfoot, named as an Alaska director for the Alaska–Yukon–Pacific Exposition planned for Seattle in 1909. In 1905, the steamer DOLLAR arrived in Seattle carrying a shipment of furs and the body of a man named Frisby, who had recently died at Coldfoot of unknown causes.

And there were stories of success, which drove so many to seek their fortunes in the far north of Alaska. John Hatch, called “an old sourdough,” made his discovery of gold at Emma creek, just four miles above Coldfoot on the Koyukuk River. His fortune of $50,000 was gained with the help of ten other men working his claim. Through inspiration and trial, travel, and hardship, prospectors and adventurers alike made a life in Coldfoot, Alaska, from its earliest days. 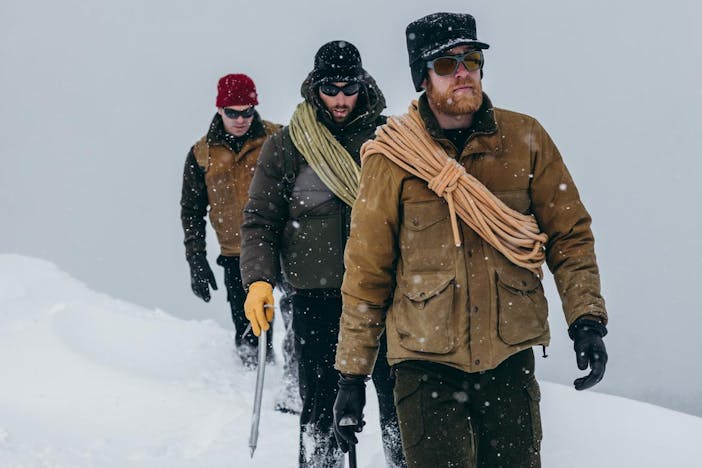 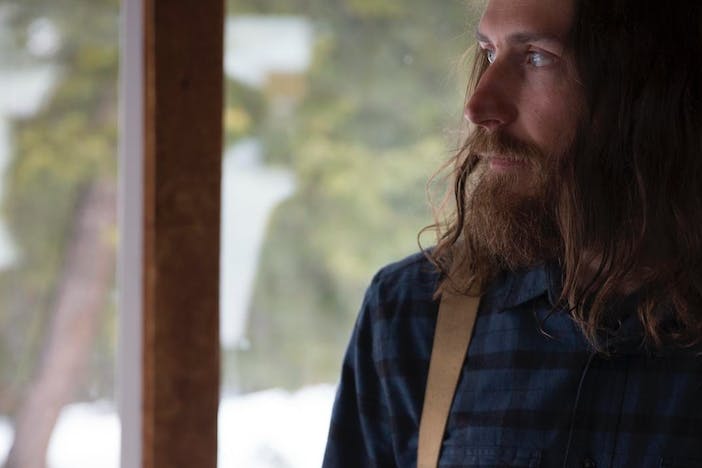 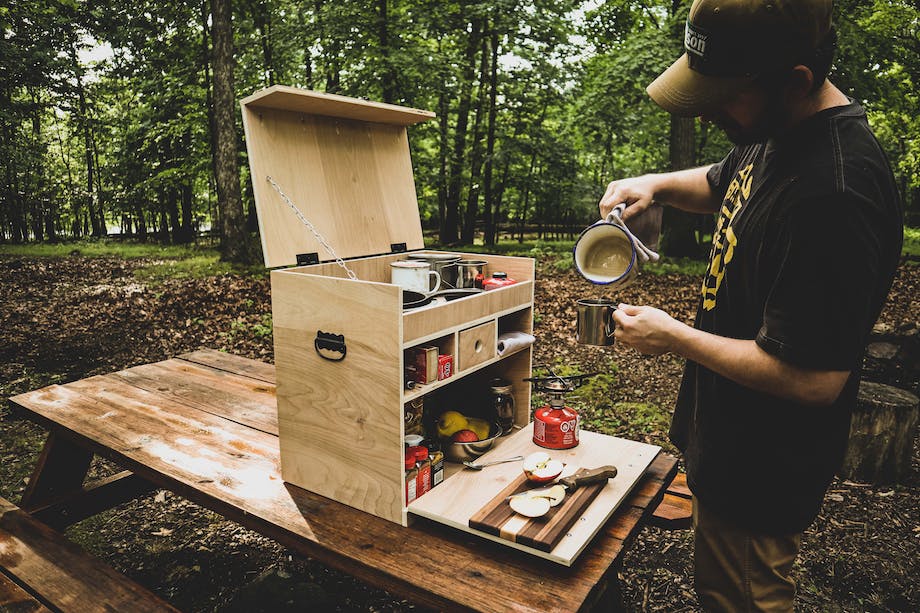 One of the biggest challenges of any camping trip is having a proper cooking loadout. The solution is one that dates back to the 1800s Oregon Trail: the chuck box.
A chuck box is essentially a kitchen in a box. It stores your cooking stove, fuel, pots, pans, utensils, and food. When open, it offers a flat prep surface for a proper fireside meal and helps keep all of your kitchen items neatly organized in one place. Since a chuck box is portable, it’s very versatile as you can leave it the trunk of your rig or set it up on any flat surface. In this how-to, we’ve teamed up with Peter Capar to provide you with a full build design for a simple, customizable, chuck box using a single sheet of plywood. 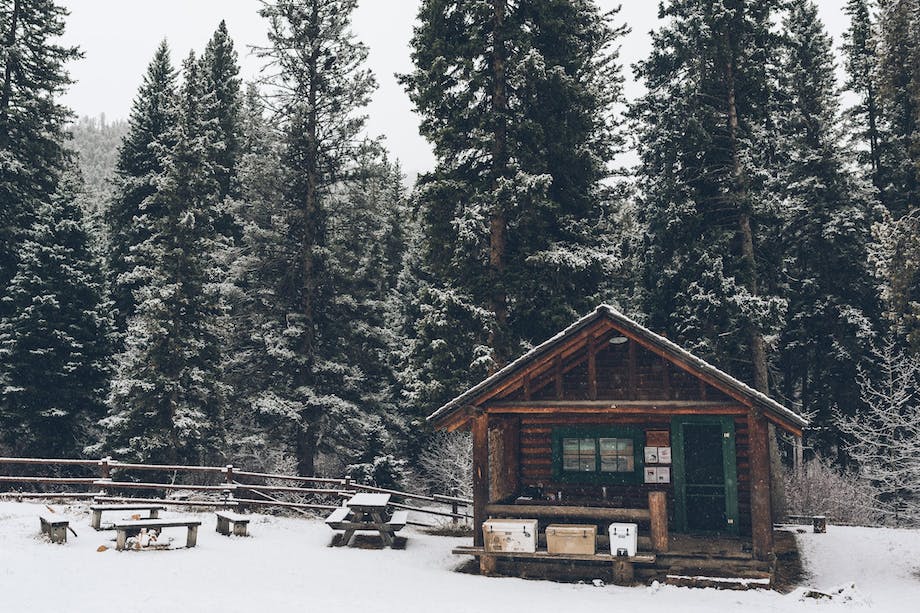