During the summer I worked part-time at a local fly shop, The Fly Fisher’s Place. This shop, like many counterparts all over the country, is open for business, but they aren’t there just to sell flies and book guide trips. These shops provide not only a place to buy fishing tackle and get the latest information about what is happening on the local waters but, more importantly, to provide a place to learn something new, swap ideas, share stories and brag a little about one’s latest catch. Most days are relatively the same, with the usual stream of folks either coming in to get advice about where to go and what to use, or stopping by to tell a tale of where they’ve been and what they’ve caught. So unless you are retired, or one of the “20-something” employees fortunate enough to be able to spend the majority of their free time stalking fish, both of the above scenarios can generate frustration for the person standing behind the counter. Not yet retired, and having left the “20-something” category behind long ago, I fight that predictable and on-going itch caused by not getting in enough time to fish myself. 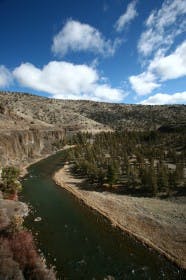 Last week was different. I was privy to an unusually refreshing story that was about much more than catching fish. Dick and Joanie Finley, a couple who looked to be in their late seventies, were part of the usual gaggle of customers lined up that Wednesday morning to meet their guide, have licenses checked, etc., and go off for a day of fishing in Central Oregon. These two stood out, not only because of their age, but because, as I could over hear, they had a couple of serious of concerns. Dick was uncomfortable in boats and wanted to be on a smaller stream, and Joanie’s bad back made it challenging, even dangerous, for her to wade. Not only was there this quandary as to where to go fishing, but they were brand new to the sport, having taken it up recently; the plastic sleeve still covering the cork grips on their newly purchased rods. As they went back and forth with our guide, Mac, trying to find a suitable and safe solution to their predicament, the other shop employee and I just looked at one another and shook our heads. Good luck, Mac. This had the potential to be one of those trips guides talk about for years.

As it turned out . . . it was, but for reasons other than what we’d assumed. When Mac came into the shop the next morning, I asked him how his day with the Finleys went, expecting to hear the worst. It seems, once on the stream, the Finleys opened up to Mac, as clients sometimes do. There is something about being in the outdoors, about being on the water that just clears away all the clutter and allows those things that are truly important and real to come to the surface. Mac learned that Dick had recently been diagnosed with a serious illness and Joanie struggled with chronic pain on a regular basis. After Dick’s diagnosis they decided they wanted to do something together . . . as Dick put it, “have one more adventure.” Being people who enjoyed the outdoors, fly fishing seemed like a reasonable choice, as it offered time in nature and did not require a great deal of strength or stamina. They had recently read up on the sport, purchased the needed equipment and were ready to give it a go. This day with Mac was their day to see if fly fishing could give them what they were looking for. Joanie described it as their “one last chance”.

Mac took them to the Crooked River, a beautiful high desert stream that winds though colorful, basalt rimrock and gives the outdoorsman the opportunity to experience the wild and untamed without having to travel too far from town. First, Mac took the time to work with each of them on their casting stroke. He then went on to share some particulars about the Crooked River watershed and where to find the native rainbows that lived within. They discussed insects, hatches, what the fish might be eating, and together they chose which flies to use based on the current hatch. Once on the water, it seemed Joanie in particular, had a hard time setting the hook, so as the day wore on, Mac offered to set it for her. She would cast, pass the rod to Mac, and if a fish took the fly, he would set the hook and hand the rod back to Joanie so she could have the experience of playing her fish and landing it. By sunset, both Finleys had hooked, fought and landed fish. 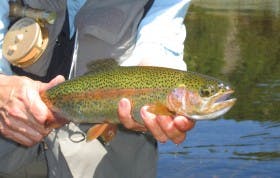 A lot can be said about fly fishing guides. Whole books have been written by and about them. They are a different breed for sure, and like any other profession, some are much better than others. Sure, we might all judge a guide by how well she knows a stretch of water, how skillful he is behind the ores and, of course, how many fish they put us into. But I really stand up and take notice when I hear a story like the one Dick and Joanie must be telling their friends. So hats off to guides like Mac who are patient, who have the knowledge, ability and desire to teach the eager novice, not only how to catch a fish, but about what it takes to become accomplished in the art of fly fishing.

Dick and Joanie have booked a second trip with Mac. This time they want to try lake fishing from a boat. The adventure continues. 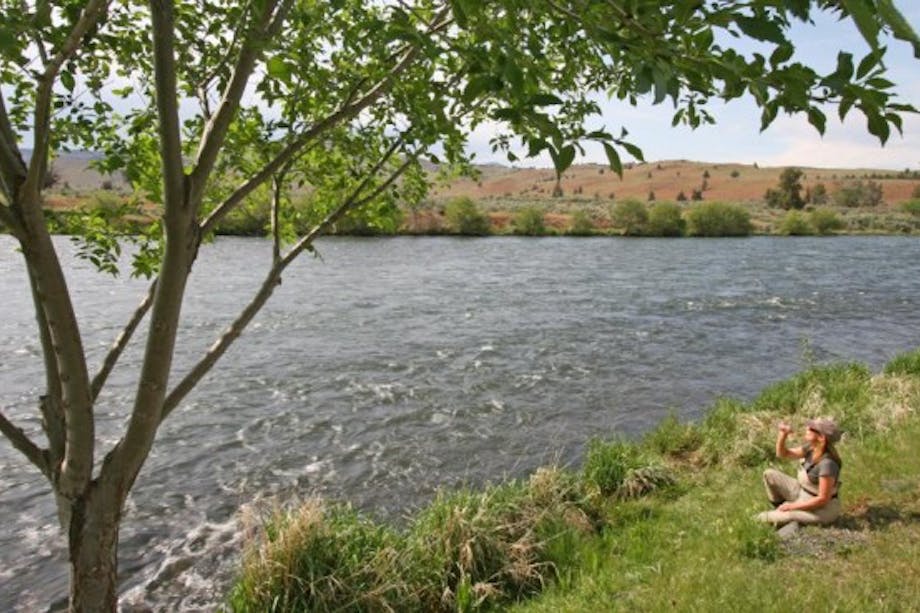 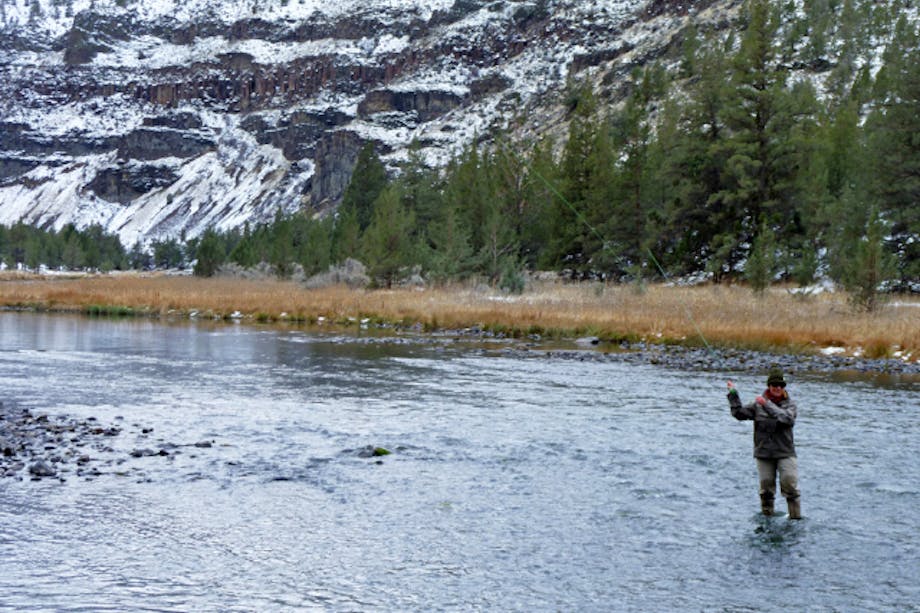 Judith O’Keefe has fished many places and can fish with the best of them. But when she is looking for some fishing advice she turns to her local fishing outfitter Dave. We all enjoy going into fly shops, whether it’s our local shop or a destination shop while we’re on a fishing trip.  One of 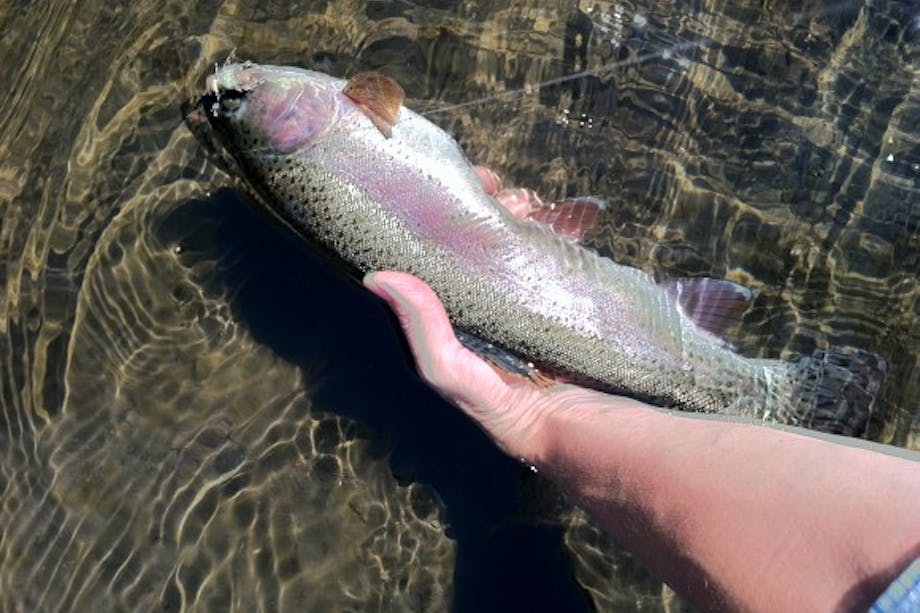 Judith O’Keefe started off her fall with a fishing trip in Southeast Oregon. Her passion for fishing has developed over the years. Here she tells us about when she escaped to find a little fishing hole to call her own. When I hear the phrase, wide-open spaces, I think of southeast Oregon.  I’ve had an