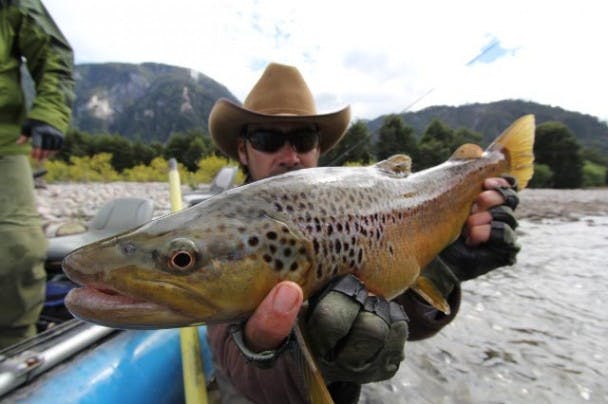 Brian McGeehan leads annual hosted trips to Patagonia and is the owner and outfitter of Montana Angler Fly Fishing in Bozeman, MT.  He has been guiding fly fishing trips in Montana and Colorado for 18 seasons.  Montana Angler offers trips to both Chile and Argentina and works with a variety of lodges in South America.

When you have a conversation with an avid angler that has travelled the globe in search of wild trout a few locations quickly surface: Montana, Alaska, Kamchatka, New Zealand and Patagonia.  Each destination has its own allure and I have had the good fortune of visiting all of them and make my home in Montana as a fly fishing guide and outfitter.  Of the locations listed above Montana has some of the most diverse fishing conditions on the planet with a density of big float rivers, technical spring creeks, tailwaters, trophy stillwaters and productive small streams that is hard to match.  Montana is also relatively easy to get to for North American Anglers so we also see our fair share of visiting fisherman on public waters. Of the international destinations that I have visited, Patagonia is the region that offers the unique blend of different waters similar to the Northern Rockies with far fewer anglers.  On my trips to Argentina and Chile I often feel that I am stepping back in time and experiencing what Montana was like 50 or 75 years ago.  My favorite region to target on trips to Patagonia is the central region which receives less fishing pressure than the more famous northern area where fly fishing in Argentina was first developed. 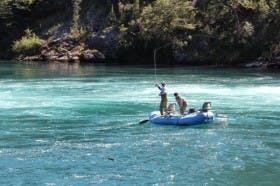 Where is Patagonia?
Patagonia simply refers to the Southern Andes and overlaps both Chile and Western Argentina.  We can loosely break up Patagonia into three distinct sections: North, Central and South.  Northern Patagonia is home to the most famous South American trout rivers including the Chimehuin, Collan Cura, Alumine, Malleo, Limay and Traful.  In the North the vast majority of the fishing is on private estancias.  Some of the rivers can also be accessed by bridges on float trips.  This region of Patagonia sees more anglers than any other but is still magnificent with some of the world’s classic trout rivers.  Southern Patagonia is most famous for its sea run brown trout in Tierra del Fuego and the Santa Cruz province.  Rivers like the Rio Grande must be fished by booking a week at one of the lodges on the estancias that have access to the legendary fishery where the average trout weighs twelve pounds.  Fishing in the South generally means that you will be fishing a single river on the entire trip in very windy conditions for some of the biggest brown trout in the world.  The topic of this post is Central Patagonia which provides a great variety of classic trout fishing.  This is my personal favorite portion of Patagonia to fish because of the variety that it offers and the lack of pressure. 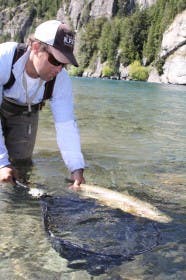 Getting to Central Patagonia

One of the reasons that Central Patagonia receives less anglers than in the North is because it is a bit harder to get to.  Most anglers fishing in the North fly into Bariloche which receives about 8 flights a day from Buenos Aires.  The fishing in the central part of Patagonia is anywhere from 3-8 hours from Bariloche by vehicle so it is best to fly into Esquel which only receives one flight a day on just 4 days of the week.  If you are targeting the Argentine side of Patagonia and the Futaleufu region of Chile you fly into Buenos Aires.  Generally you leave the US on an evening flight and arrive the next morning.  Because the airport for domestic flights to Esquel is on the other side of Buenos Aires it is best to spend one night in the capital city and then leave for Esquel the next day.  There are a few good outfitters and lodges within an hour and a half of Esquel as well as some independent guides. 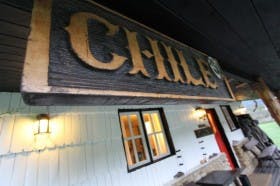 Lodges, Independent Guides and DIY
I have had some friends visit Argentina and do all of their fishing on their own and they had a great trip with mixed success on the fishing side of the equation.  While there are some fisheries that you can access from bridges a lot of the best fishing is on private estancias or big rivers that are floated.  If you are up for an adventure and don’t mind burning some days on wild goose chases that don’t pan out then this can be a fun option since Patagonia is easy to travel around with a rental car and relatively safe.  There are also independent guides based in Esquel that can take you onto some of the public waters and National Park waters if they have the correct permits.  On the Chilean side lodges are the main option and DIY is very difficult.  Lodges on both sides of the border are a great option since most have access to private estancias that they lease and have permission on but of course they are the most expensive option.  In general on my trips I am hosting a group of anglers and we always stay at lodges. 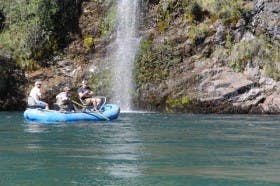 The Rivers and Lakes
The landscape varies dramatically in Central Patagonia depending on how close to the Pacific Ocean you are.  In general on the Chilean side it is very wet with rugged fjiords and resembles coastal Washington in climate.  The rivers on the Chilean side get big fast due to the amount of moisture in the region.  In Chile it takes much more effort to travel from one river system to the next because of the rugged topography so you will generally focus on just a handful of river systems when fishing out of the few lodges in Central Patagonia on the Chilean side.  On the Argentine side the landscape varies from timbered Montana like scenery to very dry scenery like that near central Wyoming.  Travelling from river to river in Argentina is much easier since the topography is more open east of the Andes.  The fisheries offer incredible variety ranging from huge rivers like the Futeleufu/Yelcho system in Chile to small and intimate spring creeks in Argentina.  My favorite aspect of a Central Patagonia trip is that you can see a wide variety of rivers, streams and lakes and often fish a different river, stream or lake each day.  I also enjoy the option of combining both Chile and Argentina on the same trip.  The Futaleufu River system is just inside of the Chilean border and one of our favorite partners is the Futa Lodge which is run by my friend Brian McKnight.  Futa is easily accessed from Esquel, Argentina and it is really nice to spend a few days in Chile fishing the Futaleufu River, the Yelcho and Lago Yelcho and then head back into Argentina for the great diversity that is offered there.  The perk of fishing on the Chilean side is that there is so little pressure even on the big rivers.  The advantage on the Argentine side is that it is much easier to go from river to river and see a wide diversity.  If you are fishing the smaller estancia waters in Argentina you can also expect very limited pressure.

On Patagonia trips I rarely find the need to nymph fish since the dry fly and streamer fishing is so good.  Much of the fishing is sight casting to rainbows in the 19-20” range.  Some of the browns go much larger and they often succumb to streamer fishing.  There are some lakes in both Chile and Argentina that hold some massive fish that easily go over ten pounds such as those in the Rio Pico region of Argentina or Lago Yelcho in Chile.

Tackle
We use the same equipment in Patagonia that we use in Montana.  I normally bring a 5,6 and 7 weight rod with me along with floating lines.  On my seven weight I also have a 200 grain sink tip for streamer fishing on the bigger rivers like the Futaleufu.  Leaders in the 7.5-9’ range are perfect and you never need to fish anything lighter than 4x even in clear waters and often 1x and 0x is preferred for streamer fishing to hang onto large fish.  Fly patterns depend on the fishery, but a good selection of beetles, attractor foam dry flies and some smaller dries like adams in 16s and 20s should be good along with a lot of big streamers in blacks, whites and olive seems to do the trick. 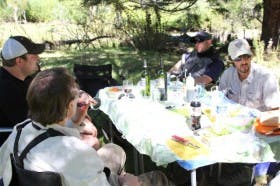 When to go
The seasons in South America are opposite of those in North America so the Patagonian spring starts in October which is the equivalent of April and April is similar to October north of the equator.  January, February and March are peak months for travelling anglers.  Although rivers can get high in the early season from melting snows, they often remain clear due to the many lake systems that filter out the sediment.  The fishing can be great at any point in the season but if you are going to some waters that see more pressure than others that are public it is nice to go earlier in the summer like December or January before the fish see more flies.  Many of the fisheries see very little pressure so they can fish great all summer and into the fall.  I have been in both January and March and had great fishing. 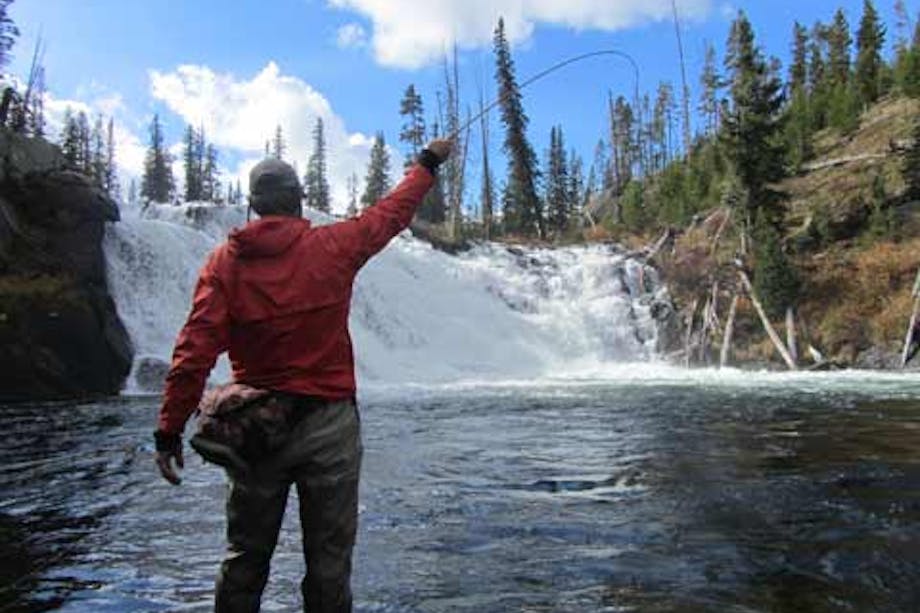 Brian McGeehan has been a fly fishing guide for 17 years in both Colorado and Montana and owns Montana Angler Fly Fishing in Bozeman, MT. A fisherman’s job is never done, when it comes to fly fishing there is always more to learn. Brian helps us improve our catch rates just in time for summer