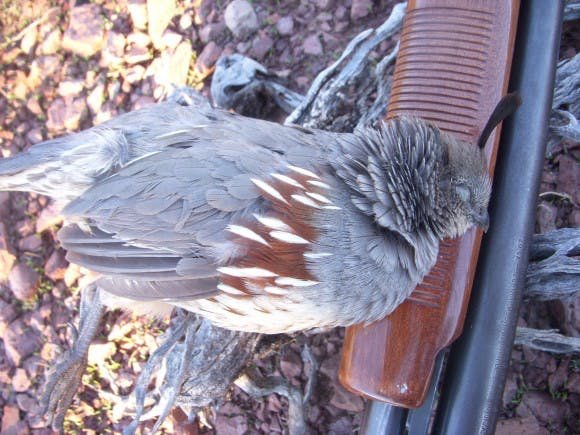 Filson guest blogger Ben Smith, of Arizona Wanderings, takes us on one of his Gambel’s quail hunts and leaves behind some of his expert tips. Read this and you will feel like you are right out in the field with him!

As I scrambled up the side of the wash, the loose rock gave way underneath of me and I slid backwards. Looking up the embankment I could see the bobbing heads of about a dozen Gambel’s quail that were quickly putting some distance between themselves and me, even though their stride was a fraction of mine. The morning sun had quickly warmed the desert, and the cool air, that had greeted me as I opened the truck door an hour earlier, was a far off memory. Sweat poured off my face and soaked my shirt as I willed myself forward, up the hillside in front of me. I crested the top of the rise and, while my chest heaved with deep breathes, the ground erupted in front of me with the thunderous noise of flushing Gambel’s. I raised my gun quickly but the birds were already out of distance. With a few beats of the wing, they have flown across the next canyon and were patiently waiting on the other side for me to give chase. The devastating realization sunk in that, what took these small birds a few seconds to fly across, will take me the better part of twenty minutes to hike to.

Down the other side of the hill, I went and through the bottom of the wash. I turned my back to the briars that choke the sandy arroyo and allowed my vest to take the brunt of the stickers that pulled at the tough fabric. Once clear of the vegetation, I inched my way up the next knoll, pausing often to listen to the clucking and purring of the birds as they fed above me on the desert floor. Gun at the ready, so as not to make the same mistake as earlier, I slowly moved into position when suddenly, the birds fell quiet. I knew they were close and I waited…20 seconds…40 seconds… I fought the urge to take a step forward.  Too frightened to wait, a bird broke from the bush two yards to my right. My gun rose and slammed against my shoulder as the bird crumpled and fell to the rocky desert. The blast from the shotgun echoed through the canyons and 3 birds took flight to the left and, as I swung the gun in time with the last bird, the roar of the twelve gauge filled my ears while my pattern found the mark.

Picking up my quarry, I paused and noted the weight of the birds and the beautiful markings that graced it body, before sliding the quail into my hunting vest. After a swish and swallow of water, I slid two more shells into my grandpa’s old shotgun and look towards where rest of the covey had glided. Readjusting my game bag and cradling the gun in the crook of my arm, I started to pick my way down the other side of the hill, knowing full well, that I would be climbing these hills the rest of the day.

I have been hunting Gambel’s quail since I moved to Arizona 5 years ago. They have taught me many things, but here are a few tips before you head out into the field.

1. Make sure you are in good shape – Gambel’s quail tend to gravitate toward the washes, hills, and canyons of the southwest. The hunter will be walking up and down some intimidating hills to find birds.

2. Bring tons of water – The desert is an unforgiving playground and it is very important to stay hydrated.

3. My two flush theory – Typically, when I find a vocal covey, I will walk up on the birds and they will flush a good ways out. Watch where they land and know that they are going to run at least 40 or 50 yards before holding. Once I walk up on them again, they usually will flush, possibly giving me a shot. After this second flush, Gambel’s will usually pair off and hold a little tighter allowing the hunter to walk up and flush birds within reasonable shooting range. Take your time and stop often, as these birds can hold until almost stepped on.