At the point where travel up the Koyukuk River was no longer feasible, the gold-rushers set up supply camps at places such as Coldfoot on the Middle fork of that river, at the mouth of Slate Creek. Wiseman, 16 miles further north on the Koyukuk, was later established in 1908, with both far removed from the Yukon, which lay an imposing 586 miles away. They came in winter using dog sleds over frozen water, snow, and ice; then with the spring thaw, by foot and overland, hauling everything they needed to survive the cold, feed themselves and their animal charges, and bring “the color” out of the ground.

The price of hauling freight the 65 miles from Bettles, Alaska, to Coldfoot almost matched the price of freight from Seattle to Bettles. This had a reciprocal effect on the cost of goods for resale in the far north, with high markups not uncommon. These high transport prices have their own history throughout Alaska and the Yukon, and some made their fortunes in this fashion. One account from 1896 told of a sack of potatoes that sold for 25 cents in Washington State costing 85 dollars in Circle City. Supplies from trading posts and stores in Coldfoot some 175 miles above the Arctic Circle were no exception to the laws of supply and demand, especially where gold dust, flake, and nuggets were the common form of payment.

The American explorer, naturalist, and writer, Ernest Ingersoll, described how having enough provisions was a necessity for the prepared traveler to venture into the far north. On average, a dog sled could carry between 600 to 800 pounds, with food often secured in a “grub box.” For provisions, only the most “condensed and cheapest” and ideally purchased and transported from a person’s “starting point” were recommended. Otherwise, the would-be prospector could face food shortages and starvation – or could look forward to having to pay extortionist prices en-route to (or returning from) the site of his gold claims. Such provisions, as acquired from Dawson City, were advertised in 1897 as costing $200 for one year of supplies, while a complete outfit for an overland journey would run a person around $150 if bought there. By comparison, the same supplies would cost $3,100 in today’s prices.

To go unprepared was a common mistake made by newcomers to the Alaskan wilderness: older and more seasoned prospectors called such newcomers “tenderfoot” or “chechaco” and looked on their chances as slim to none to survive the first winter.

Another prospector from 1906 described in a letter how a new stampede to the Chandalar District was a windfall for Coldfoot as a local source for supplies:

A man can travel from Fairbanks to Tanana light and from there to Bettles light, and through to Coldfoot, where he can get his supplies, have them freighted or haul them himself the balance of the trip, about sixty or sixty-five miles, there being cabins up all along the line. Coming the other way, they will have to take sufficient supplies to carry them to Circle, then to Fort Yukon; from there, they have a haul of about 170 miles to take their provisions.

To survive, prospectors and other travelers relied upon a wide variety of types of provisions. The geographer Josiah Edward Spurr in his first exploration of the Alaska interior in 1896 described how he and his two companions lived on tinned dishes of bacon, beans, and applesauce at waystations, while eating basic staples like corned beef and crackers on the trail. Spurr’s account also mentioned his encounter with two customs agents in Circle City, who had seized two “good-sized kegs” of illegal whiskey smuggled into the Alaska territory from the Canadian side of the Klondike (the bringing in of spirits was against US law at the time).

Fish and game animals also provided sustenance for hungry prospectors. Moose, deer, trout and salmon were common, depending on the region, and surplus kills were often used as a source of trade or sometimes just as companionship. In his diary entry of Sunday, July 2, 1893, Fred Wright wrote of his encounter in the Yukon with just such a timely offer:

“Ran through 250 pans. Have not cleaned up [found gold] for 3 days. A man who is working in a creek about 2 miles up came down and told me and 2 more here working a mile below that if we would go up to his place he would give us a quarter of moose – we would you bet!”

Other foodstuffs taken via sled dog, backpack, horse and mule, included specialties like coffee, tea, tobacco, chocolate, hams and sides of bacon, and bulk provisions, such as flour, beans and meal. Another would-be prospector, Robert Haddow, wrote in his diary of 1898 before leaving for the Klondike a list of packing supplies and their local prices in Tacoma, Washington: Iowa butter for 24 cents, cheese for 14 cents, and butter tins at 6 cents each, listed with other basics, such as a lantern, tobacco, flint and matches.

“In remote mining outposts like Coldfoot, such protective gear was the norm and gave credence to the settlement’s namesake. To do otherwise, was to risk frostbite or perhaps being swallowed up whole by the mountains and rivers, never to return.”

Equipment was vital for prospecting at placer mining claims, and “must-haves” included pans, rockers and pickaxe. For shelter, they used blankets and bedding rolls (tents were not employed during the winter months, as these would become coated with ice from the breath of sleepers and were also apt to catch fire easily). Firearms were brought as well, ranging from rifles used for “living off the land” to big revolvers worn on the hip to protect miners coming out with leather or buckskin pokes (bags) filled with their gold takes.

For clothing, articles were needed that not only insulated the wearer against bitter cold temperatures (Coldfoot is known to reach 65 degrees below freezing and even lower in the winter months from mid-October to early March) but also needed to protect the wearer against moisture. These lists suggested fur robes, fur coats, rubber boots, and a plentiful supply of warm durable underwear. The best waterproof footwear was said to be the Esquimau mukluk worn by many with first-hand experience – not easily attainable in the Alaska interior, but especially good for wet trails in the winter months, with nothing its equal. These “torbassâ” as they were alternatively known, were made of reindeer skin, sewn together to come up to the knee, where they were tied. The soles were sealskin turned over at the heels and toes and brought up at the sides. For summertime, the moccasin was ideal footwear for dry trails.

In remote mining outposts like Coldfoot, such protective gear was the norm and gave credence to the settlement’s namesake. To do otherwise, was to risk frostbite or perhaps being swallowed up whole by the mountains and rivers, never to return. 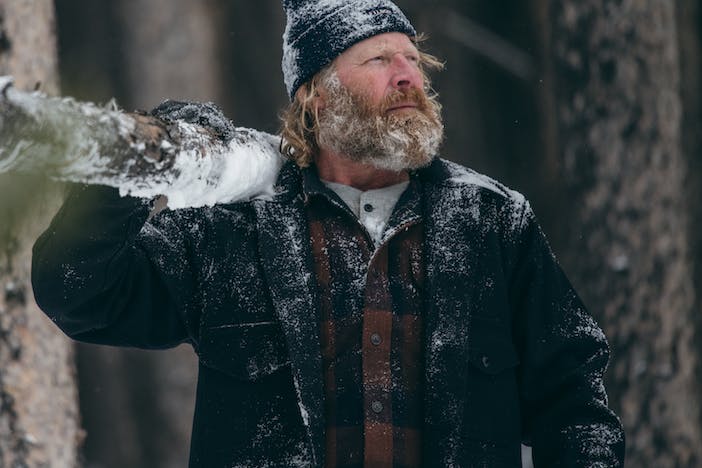 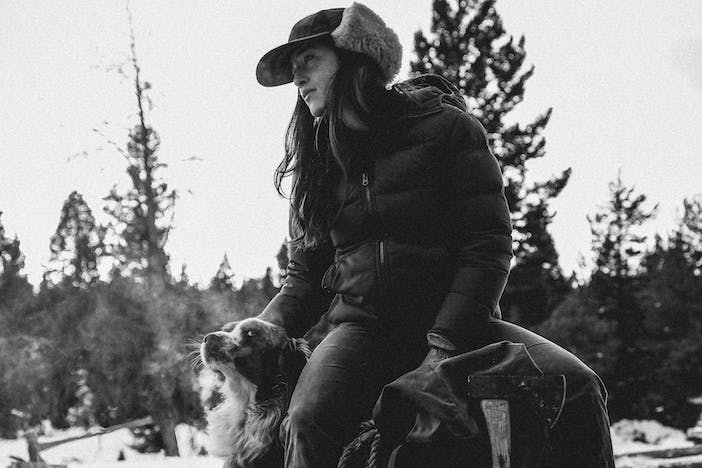 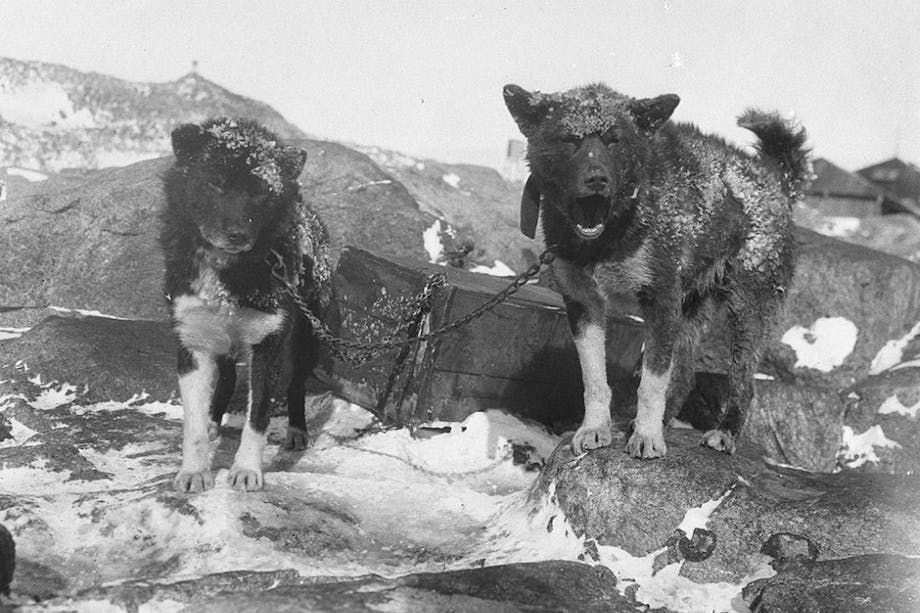 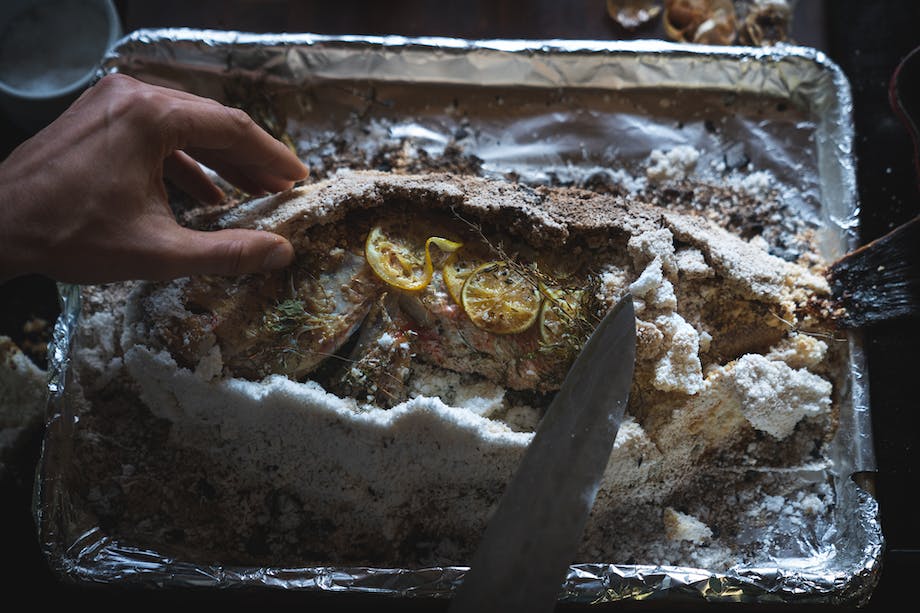 Cooking in a salt crust is essentially a method of steaming, but instead of using water to steam, the salt crust holds in the natural moisture from the fish to steam itself. With the addition of herbs and citrus in the salt crust, we are effectively cooking in a flavor pressure cooker.