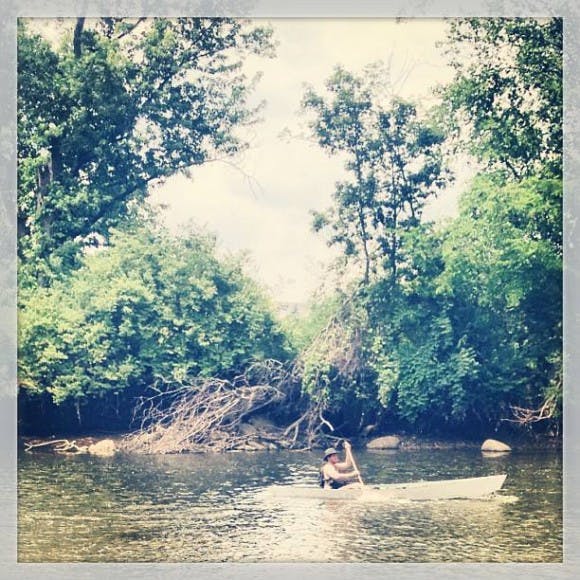 Even if you live in a city, don’t discount your local waterways for great weekday fishing
By David S. Lewis

After a friend tipped me off to a yard sale “canoe” they had seen, I rushed over and found my new boat, a Cajun-style pirogue, and for a clean $30, put it in my truck and took it nearly directly to the river that runs next to my house.

As a former denizen of the Sportsman’s Paradise, I knew that this boat would be perfect for patrolling the Olentangy River, which cuts through the city of Columbus, Ohio, until its confluence with the Scioto. The city recently removed two of its low-head dams, the long concrete rolls that had kept the river slow and stagnant for decades; resultantly, the river had narrowed and shallowed, with a current that sped over brand-new riffles and barely slowed over hundreds of freshly minted pools.

I have fished the Olentangy for years, much to the amusement of my more serious fishermen friends.  I love to plan elaborate fishing trips, heading out of state to find the most elusive quarry, but I’m a professional writer, which means I’m professionally impoverished, and I love fishing far too much to rely on the occasional big trip when I have a fine, clean waterway like the Olentangy literally at my back door.

I dubbed my new water-beast the “Honeyrunner” and put her in at the kayak landing I’ve been homesteading with my good friend Andy.  She was a hellion to pilot at first: 14’ long and no more than 2’ wide at the beam, it felt like I was paddling a mean-spirited unicycle, but when I got the hang of her, we headed downstream with my 5/6 wt. fly rod and a wallet full of poppers and streamers tucked into my Filson Foul Weather Fly Vest.

The pull straps that adjust the height the vest rides on you are primarily designed for deeper wading, but it’s also the ideal vest for getting the thing high enough it doesn’t get in your way while paddling in a kayak or other low-seat-design boat, so it was the natural choice for a fast-river pirogue paddle, too.

Despite its non-reputation as a fly fishing state, Ohio has some of the finest streams and rivers in the country.  We have trout, but it’s the relative paucity of that particular species that leaves us off the radar, in spite of numerous other fly fishing opportunities that the dedicated troutman may never experience.  Folks at the fly shop I patronize regularly catch big channel cats or black drum.  I have a passion for small-mouth bass.  They are a beautiful fish, they strike harder and fight more fiercely than any of the tame stocked trout we have, and I find trout’s reputation for finicky feeding and clever behavior to be overrated, particularly compared to the elusiveness of my smallies.  Sure, little ones will hit nearly anything, but the big boys require presentation, and they turn their noses up at measly little dry flies more often than not.

About a half-mile downriver, I found a big pool under a four-lane bridge. As the waters had receded after the removal of the dams, the pool had become entirely isolated from the rest of the river.  Whatever was in that pool when the water went down was surely still lurking. 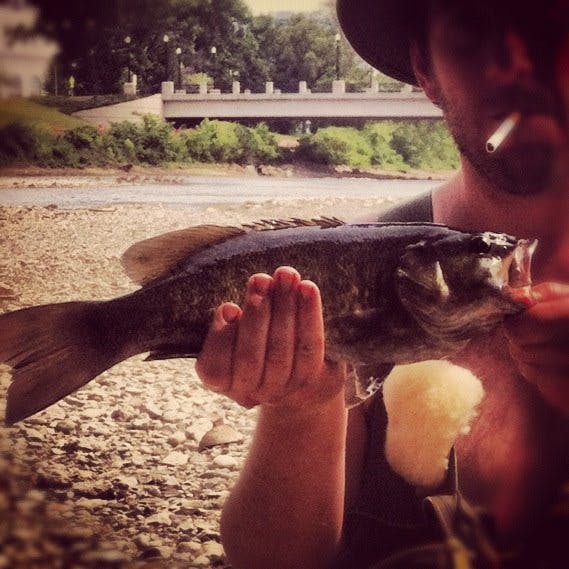 I assumed that most of the smallest minnows had probably already been consumed, so I tied a biggish rattle-head minnow imitation streamer on the end of a heavy 10-lb test tapered mono leader.  There was some wind, and I knew that I would need some heft in the line to turn over that big green fuzzball on the end. Spying some sticks protruding from the water towards the shallow end of the pool, I shot my line towards the sunken log.  I stripped in some line and immediately snagged, and started cursing just as Andy finally caught up in the kayak.

“Nothing, dude; just snagged my first ca-” I was cut off as my leader hissed through the water. Either that log was feeling frisky, or my snag was the smallmouth boss of that pool!

The fish cut back the other direction and left the water, his broad side catching the little sun available under the bridge as he flashed through the air. I stripped in an arm-length of line just in time, as he headed back into the tangled log, and then headed straight for me.  I had to jog along the side of the pool to keep him from getting slack; a bass smart enough to head for slack probably also knows how to spit a hook.

I horsed him around the pool for a little longer, but unfortunately for him, that heavy leader gave me some confidence in bringing him to bay, and sure enough, he tuckered after a few minutes and I pulled him into the shallows.  Around 20” long, and adjusting for my natural tendency to exaggerate, the old rooster weighed around 3 lbs – impressive enough for a stranded bass in an urban river.

If you love fishing, don’t just sit around and yearn for the thrill of the fight on your annual trout trip West.  There’s probably water near you, and if you take the time to learn how to fish for the fish that are there, there’s a good chance you can make fishing a daily occurrence, either before or after work.  I find that when I start my work week with a pre-office sunrise casting trip, my outlook on the world is much better.  Even the city skyline can look beautiful and wild against the rising sun – particularly if you’re viewing it with a fly rod in your hand. 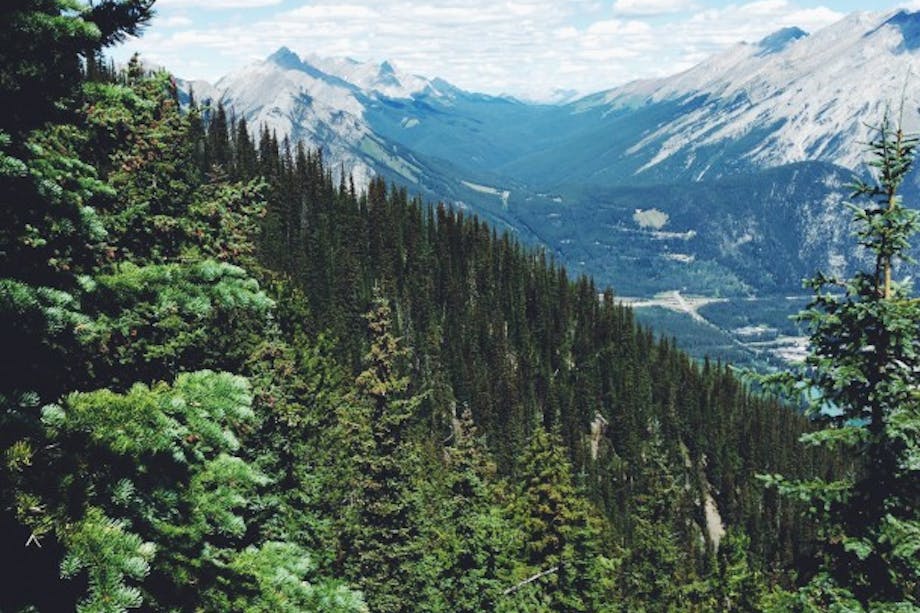 The Do’s and Don’ts of Fishing in Bear Country

What to remember when fishing around big ursids and what to forget. Words and photos by David S. Lewis. This is too important a topic for me not to include the disclaimer at the top:  I’m not a bear scientist.  I’m not even a circus trainer.  But on a recent trip to Alberta’s Rocky Mountains,

Matt Blodgett: Feet on the Ground and Hands in the Work