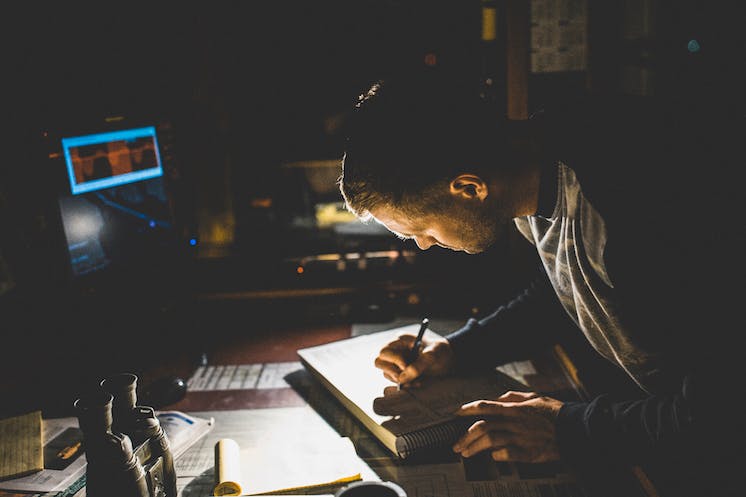 Like any ocean freighting job, delivering freight to Southeast Alaska requires a thorough knowledge of the local weather and the peculiarities of the sea routes traveled. The northeast corner of the Pacific Ocean is no exception. With its narrow channels and abundance of fog, the convoluted coastline has long been a maritime graveyard.

As told to Will Grant

Neil McGourty, 34, a captain for Western Towboat, has been driving tugs between Seattle and Southeast Alaska for the past five years. As part of Western’s twice-a-week barge service, he delivers containerized cargo to Ketchikan, Juneau, and other coastal towns that rely on marine shipping routes for everything that can’t be flown in.

McGourty’s route begins with a three-day sail along the coast of British Columbia to the southern end of Alaska. From there, he calls at nine, sometimes ten, isolated ports along the Inland Passage as far north as Skagway. Western’s highly maneuverable tugboats, which have two large propellers that can rotate 360 degrees (and have no keels or rudders), handle the barges without assistance from other boats. The tugs maneuver alongside the barge, tie up to a forward corner of it, and guide it to the dock as a single unit.

In good weather, McGourty says, his job is relatively easy. But foul weather often complicates already difficult navigational challenges. Heavy seas and thick fog reduce room for error and make everything harder. We caught up with McGourty while he was at the port of Juneau to talk about the weather and his job.

How’s the weather in Juneau?

Beautiful. Before yesterday, I hadn’t seen the sun for the past five months up here, or anywhere on the West Coast, for that matter. But it’s nice today.

Is dealing with bad weather the most difficult part of your job?

Weather is definitely the most difficult aspect of the job. Here in Juneau, for example, there’s a big mountain right behind the dock, and the wind will come straight down the mountain and blow 50 or 60 knots straight off the dock. Usually, we want to bring the barge in slow and easy—that’s plan A—but if the wind is blowing like that we might have to come in pretty hot. 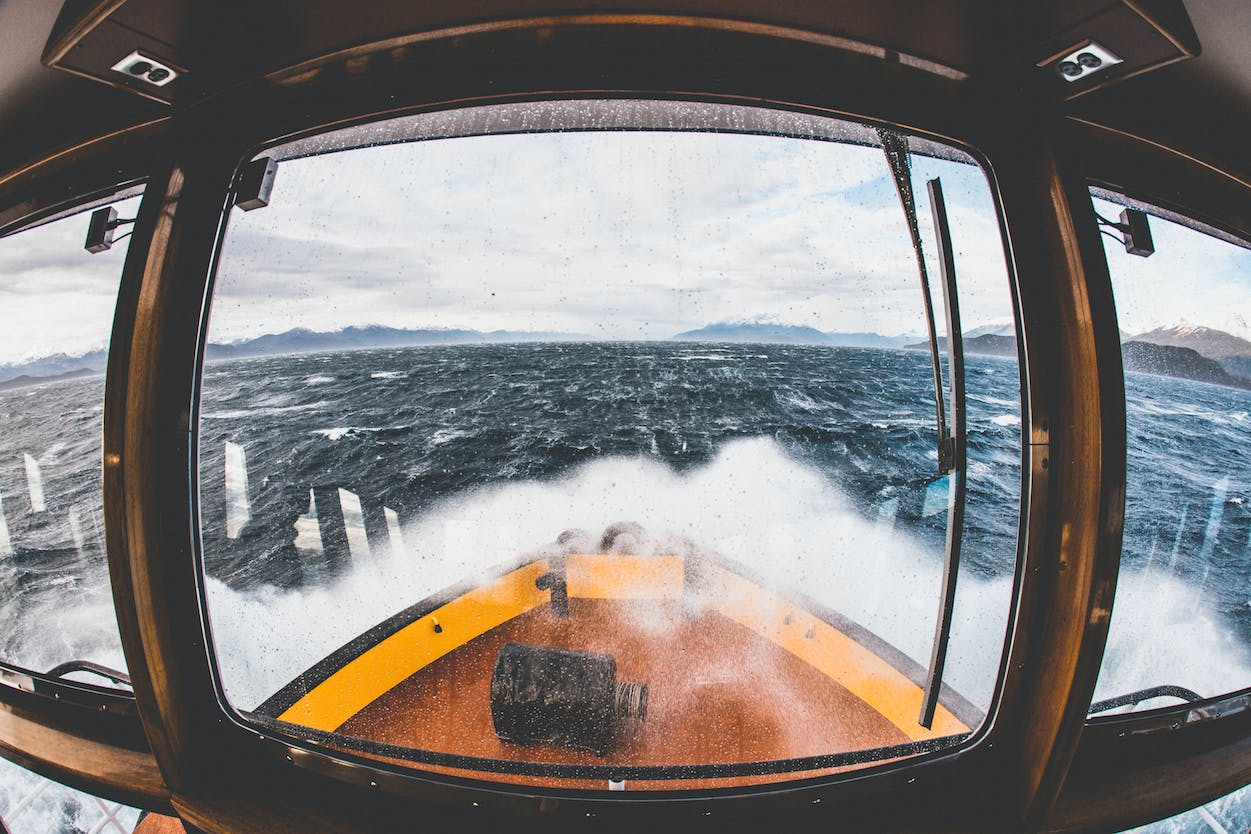 Do you drive the tug into the dock or does another crewmember?

It depends on the landing whether I’m in the wheelhouse or on the tow. If I’m out on the barge, I’ll have the chief mate or second mate in the wheelhouse, and I’ll tell him exactly what to do with each drive unit, each z-drive. I’ll tell him the position and rpms.  If I were coming into a dock, I’d say, ‘standby straight back on the inboard unit,’ and then, ‘clutch the inboard,’ and then ‘bring it up to 1,000 rpms.’ As the barge is coming into the dock, I’ll feather it, like, ‘30 back and away,’ and then ‘30 toward and ahead.’ Those are pretty standard commands.

Is having a feel for the engines and the barge a matter of time and experience?

And knowing the wind conditions and the currents, knowing how many rpms it’s going to take to move the barge and how heavy the barge is, and how quickly you want to stop it or push it ahead. That just comes with feel and time and experience, basically.

We try for that.

Is there a lot of teamwork involved in the maneuvers?

Definitely. During a landing, the whole crew is out there, except one person who’ll be sleeping so he’s rested to drive later. And when we make up [or tie to] the barge, I can’t see everything from the wheelhouse. I can get a pretty good idea of what’s going on, but I’ll have the chief mate out on deck telling me how far I need to come back, when the spring line is on, when the stern line is on, all that type of stuff. It all requires teamwork.

Do you always have the same crew aboard?

In a perfect world, you’d do the same run with as much of the same crew as possible. But there are a million reasons why you get off your regular boat or run. There are four boats that make the same run I do. Two boats leave every week. They’re all Titan-class boats, all z-drive boats, so it really doesn’t matter which one you’re on. And it doesn’t matter which crew you have because they’re all damn good at what they do. We have really good people at Western Towboat, from top to bottom.

Is traffic in the shipping lanes ever an issue?

We’ve had all sorts of near misses, mostly in Wrangell Narrows or coming into docks or making up alongside a barge. We’ve had encounters with fishing boats, sailboats, pleasure boaters—but traffic isn’t usually the problem. 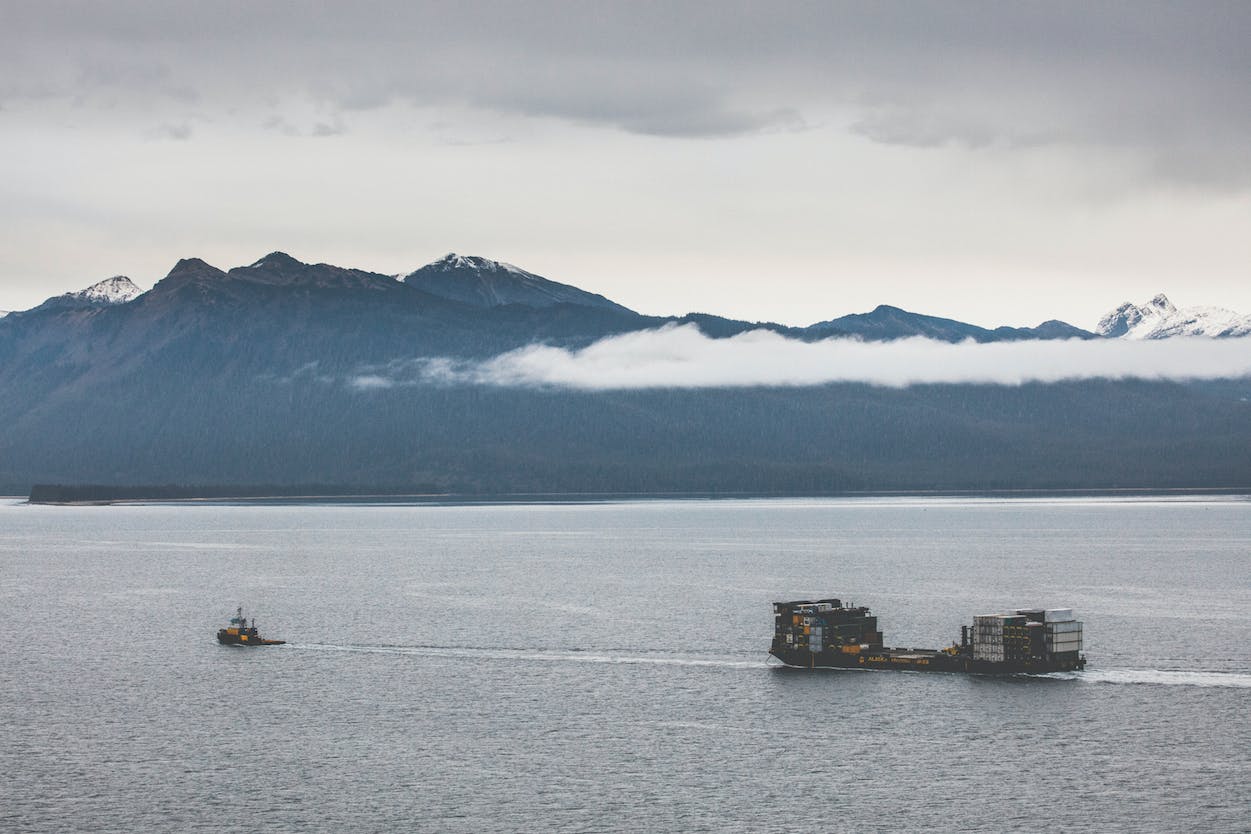 What’s the deal with Wrangell Narrows?

It’s super narrow. If you look at it on a chart, it’s like a little frickin’ ditch about 15 miles long. We reel in all of our tow wire and go through with the barge right behind us, probably 30 feet behind the tug. The channel is probably 200 feet wide and the barge is 100 feet wide, so there’s just not a lot of room if anything happens. The currents run strong through there, up to five and a half, six knots. It gets a lot of fog, and it’s shallow. Our Titan boats draw about 18 feet of water. We have to be four feet above the mean low water line, and the main channel is sounded at 20 feet at mean low water. So you can do the math.

Well, that keeps things interesting for you guys, I guess.

I like the freight run because it’s action-packed. We’re always doing something. It’s a different style of towing than, say, towing a barge to Hawaii where you’re at sea for ten days. I did a lot of different stuff coming up through the ranks at Western—from towing gravel to going to California—but now I’m pretty much exclusively on this run.

I work about 180 to 190 days per year, almost exactly half of the year. I’ll do two trips in a row, each one ten or 11 days long, and I’ll have three or four days off in between. Then I’m off for 17 to 18 days, and once I tie up the boat, I’m pretty much totally off. I’m not worried about answering a bunch of emails or getting a bunch of stuff done. When I was working on oil tankers, I’d be gone for 75 days at a time, which was hard on family life and all that. I’m home so much more frequently now. I love what I do, and I’m fortunate that I fell into it early. 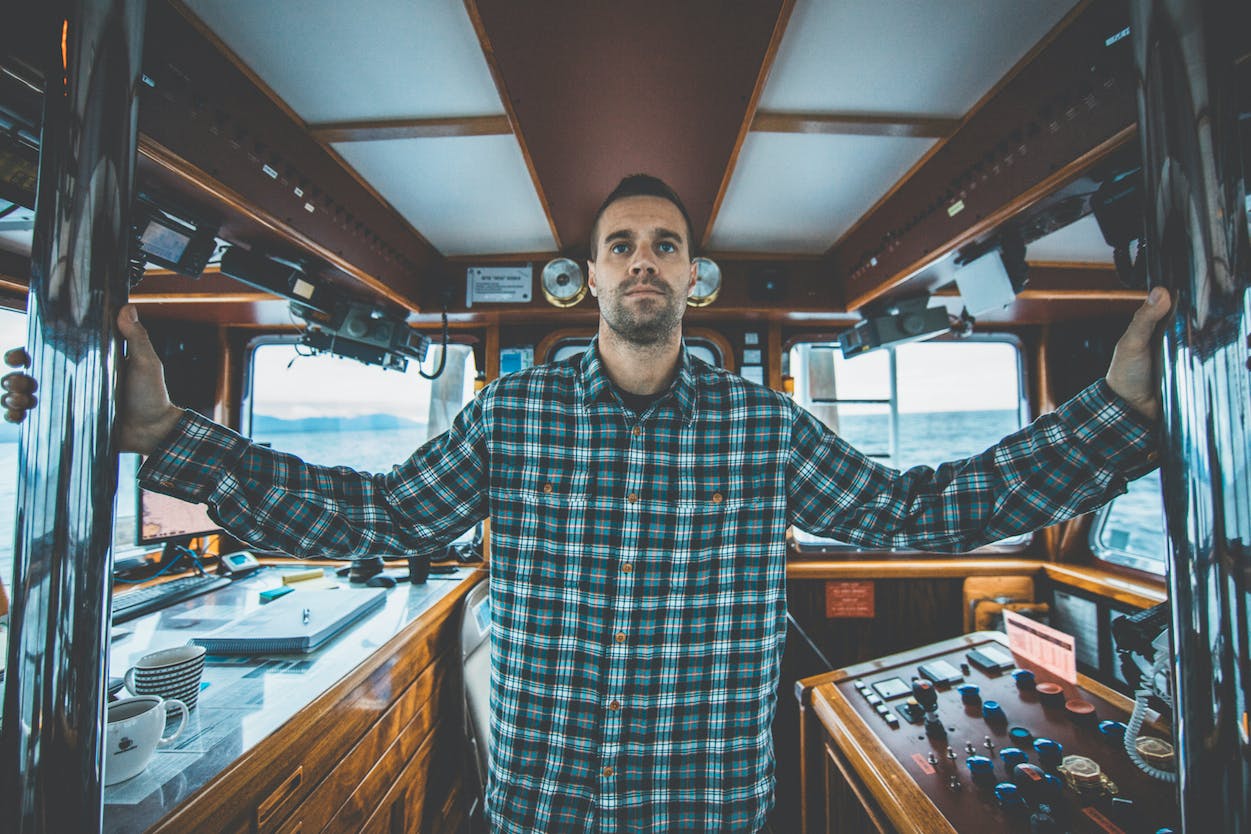 This conversation has been edited for clarity and length.

To read more about Western Towboat, check out Trade Stories: Three Generations in the Wheelhouse of a Tugboat. 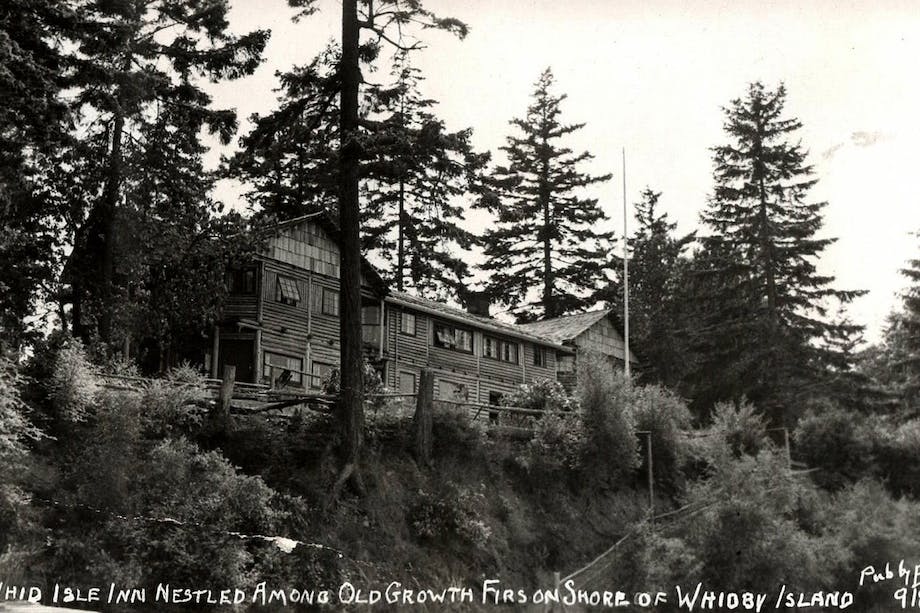 The Captain Whidbey was built in 1907 from logs and stone found on site by Chris Fisher and his son Edward. In the years since, it has served as a private residence, a boarding house, post office, girl’s school, and a general store. It has recently been restored and is now open to the public as an inn that features a Filson cabin. 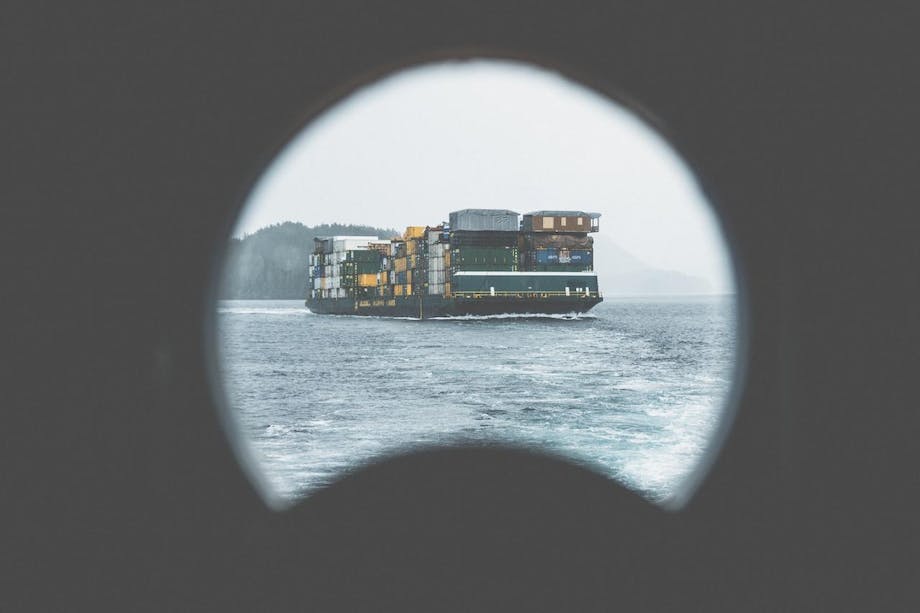 Trade Stories: Three Generations In the Wheelhouse of a Tugboat

The blue-and-yellow tugs of Western Towboat are fixtures in the Seattle area. But harbor work on the West Coast is only a fraction of the company’s business. Its biggest job is freighting more than a billion pounds of goods each year to Alaska. By Will Grant The lifeline for Southeast Alaska begins in the Lower

Lady Liberty: Inside the Heart of the Runaway